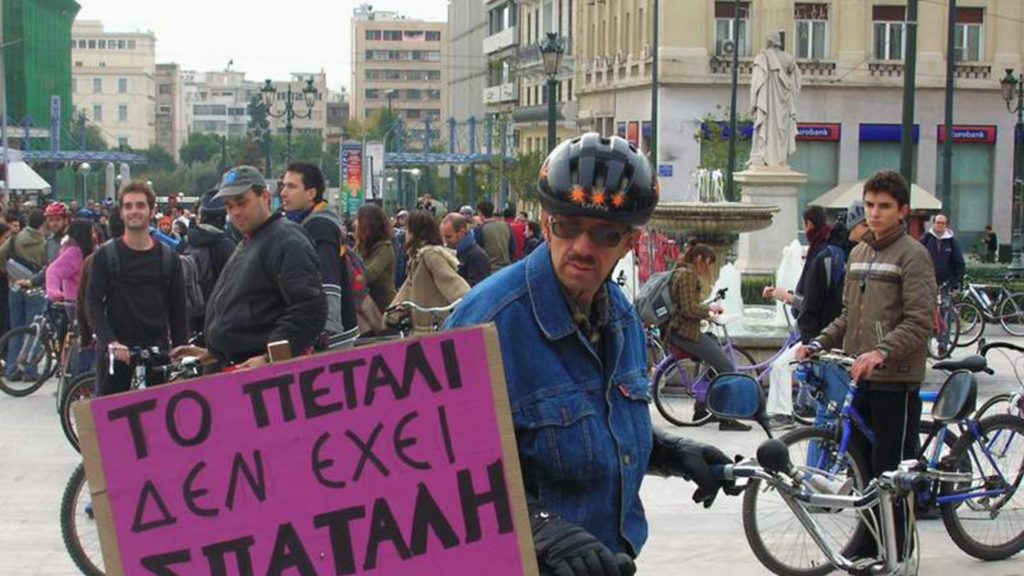 File picture of an Athenian cyclist protest. The city, through its Grand Walk of Athens Scheme is creating routes through the city centre to encourage pedestrians and cyclists. Photo: Gepsimos/WikiCommons

Cyclists as well as pedestrians are benefitting  from the introduction of the Grand Walk of Athens that will bring about a three-month ban on traffic in the city centre.

This is Athens which is part of a consortium of key members in the city’s tourism and travel industries has reported in a tweet that people were already enjoying the benefits of the new scheme: “Athenians are taking their first steps along The Great #Athens Walk. Passing between the Temple of Olympian Zeus and the Zappeion gardens, the beautiful Vasilissis Olgas Street has now become a corridor for biking (yellow) and walking (terracotta).”

This is Athens is also promoting the Greek capital as a well kept secret for cyclists citing its unique location taking in the surrounding mountains and the seafront as examples of rich and varied cycling experience.

It recommends cyclists using the pedestrianised circle around the Acropolis and the National Garden as a journey through three millennia of Classical, Byzantine and modern Athens.

Other recommended routes include the Athens Riviera taking in Palio Faliro, Alimos and Glyfada. There is a 60km route that can take riders along the coast to Cape Sounion taking in a number of popular beaches and secluded coves along the way.

The more committed riders can take on the challenge of riding up Mount Ymittos or Mount Pendeli further out from the city. It also draws attention to cycling  trails at the Parnitha National Park and Tatoi, the former royal palace grounds 27km north of the city.

The organisation said that the city is striving to cater for the cyclists who are part of a growing community in a city that is committed to ensuring “cycling pays and increasing role in the city’s future.”

Athenians are taking their first steps along The Great #Athens Walk. Passing between the Temple of Olympian Zeus and the Zappeion gardens, the beautiful Vasilissis Olgas Street has now become a corridor for biking (yellow) and walking (terracotta). pic.twitter.com/zfWyJl53W1