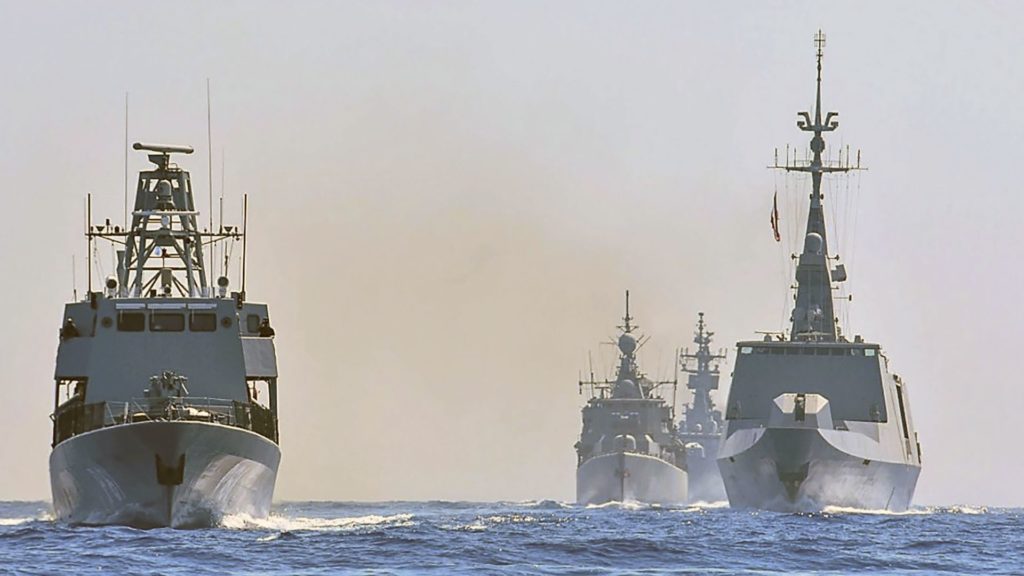 The eastern Mediterranean is bubbling as tension escalates in the area over the hottest border dispute between Greece and Turkey since the 1996 Imia crisis when the two countries came to the brink of war.

Back then, the European Union backed the Greek state and warned Turkey to refrain from action directed against Greek sovereignty and Washington also mediated. Turkey was called to solve border disputes in accordance with the United Nations Charter or by heading to the International Court of Justice.

Now, Turkey is “testing the waters” again and vying for rich gas deposits discovered in the sea area around the many Greek islands in the Aegean. According to international law, drilling rights belong to Greece but Turkey feels hemmed in and is disputing Greece’s sea sovereignty.

Yesterday, the US State Department warned Turkey to de-escalate tension, stressing that the actions of Ankara are destabilising the region. Here’s a spotlight of the situation and key players called to defuse tension:

The United Nations convention for the law of the sea recognises an exclusive economic zone (EEZ) which allows a nation to claim any mineral deposits discovered under the sea for a 200-mile radius. Turkey has not signed up to the UN convention and disputes international law. In fact, the Turkish government has consistently opposed Greece’s efforts to declare an EEZ based on its islands near Turkey’s Mediterranean shores and is currently surveying the area for gas reserves.

The Greek Foreign Ministry issued a statement following the latest NAVTEX issued by Turkey to continue its survey in Greek sea territory through to 12 September.

“Turkey continues to faithfully live up to its role as a troublemaker and an element of instability in the region/ Greece will not be blackmailed,” said the statement released early on Tuesday, pointing to Turkey’s actions which have compelled the international community to take measures. “Relying exclusively on international law, the Law of the Sea and the rules of good neighborly relations, it will continue to seek maritime zone delimitation agreements with every country in the region.”

READ MORE: Open letter to Americans about Turkey’s bullying of Greece and Cyprus

German newspaper Die Welt published a report on Tuesday claiming that Turkish President Recep Tayyip Erdogan wanted to provoke a military incident with Greece in the eastern Mediterranean in order to survive politically.

Hurriyet Daily News is critical of Greece following Turkish Spokesman Hami Aksoy’s statements that there have been media reports that Greece is beefing up troops in Kastellorizo, just two kilometres from Greece’s shores. “If true, these media resports are a novel manifestation of the law-disrespecting actions of Greece and her true intentions regarding the eastern Mediterranean,” Mr Aksoy told Hurriyet.

Turkey claims that Greece is hemming its 8,333 kilometres of coastline and vies for 462,000 square kilometres of potential maritime jurisdiction – much of it swallowing rocky islets and islands of Greece. Turkey complains that UNCLOS allows islands to have the same maritime jurisdiction as the mainland, causing it to run into a wall in the Aegean. Turkey is calling for a redefinition of UNCLOS stipulation so that the agreement of sea territory is based on its own views of what is equitable.

Recent rhetoric from Turkey has been inflammatory, with mentions of occupying Aegean islands, such as Chios and Kastellorizo. In a turn towards nationalism, Turkey has brought out maps, called “the Blue Homeland” – a catch phrase in Turkish political life shorthand for Ankara’s maritime claims.

Exploration is continuing on Greece’s continental shelf with the Turkish vessel Oruc Reis navigating the area, accompanied by the Cengiz Han and Ataman as well as ships of the Turkish navy. The latest NAVTEX statement of the maritime communications system has extended Turkey’s activities in the region through to 12 September.

Riding on the crest of nationalism in his country, Turkish President Recep Tayyip Erdogan said that “Turkey won’t allow piracy or banditry in the Mediterranean or Aegean regions.” He made this statement on Monday at an event marking the start of fishing season at Giresun, a province at the Black Sea. He said that Turkey, the country with the longest coastline in the region, won’t be confined to its shores, and he added that the discovery of 320 billion cubic metres of natural gas in the Black Sea has “revealed the true potential” of Turkey, surrounded by rich energy resources.

The US Department of State on Tuesday condemned Turkey’s maritime research, stressing that Ankara’s actions are raising tensions and are destabilising the region. Washington’s goal is to de-escalate these tensions and bring all parties back to the dialogue table, and stated that such dialogue cannot take place with force. The State Department also announced the partial lifting of an embargo on the sale of American weapons to the Republic of Cyprus. This move is part of the ‘Eastern Mediterranean Security and Energy Partnership Act’.

The lifting of the embargo concerns the fiscal year 2020-2021 and can be renewed. As the State Department explained, American diplomacy acts along the lines of a ‘wait and see’ policy, and as such avoids abrupt actions, it was added.

The State Department clarified that this decision is not related to Greece, Turkey and the Aegean, but instead concerns the strategic upgrade of the US-Cyprus cooperation, which, as was noted, will work beneficially both for the region itself and for US national security interests.

French Foreign Minister Jean-Yves Le Drian was quoted by Greek media as saying on Monday that Turkish violations of the territorial waters of the European Union member states Greece and Cyprus are “completely unacceptable”. He called on Europe to “leave behind the age of innocence and shape its own destiny”.

On Friday, 29 August, French President Emmanuel Macron said he had adopted a “red-line policy” in the region and he supported Greece’s exploration of energy resources in the Aegean. France went so far as to deploy its Navy and warplanes to the region as well as to the southern part of Cyprus in a show of support for the border rights of the two EU member countries.

The Turkish Foreign Ministry has been critical of France’s stance, and released a statement on Sunday: “Those, who think to have drawn red lines against the righteous cause of Turkey in the eastern Mediterranean, will only face Turkey’s firm stance. If there is a red line in the region, this can only be Turkey’s and Turkish Cypriots’ rights stemming from international law.”

Germany has not been supportive of France’s action and is seeking dialogue. German Foreign Minister Heiko Maas visited both countries last week and called for both countries to work towards a resolution.

The European Commission on Monday moved towards sanctions for Turkey should a solution not be found.

A senior EU diplomat told Reuters: “As well as sticks [sanctions], there will be carrots too to get Ankara to engage seriously in dialogue. These carrots could be progress on a new customs union and more money for the refugee program.”

The European Commission’s spokesman Peter Stano said the EU stands with Greece and Cyprus. He said restrictive measures could be adopted but “we can also follow the path of striving to reduce tensions through dialogue and negotiations” and he called on Turkey to act in a way to contribute towards the de-escalation of tension by dialogue.