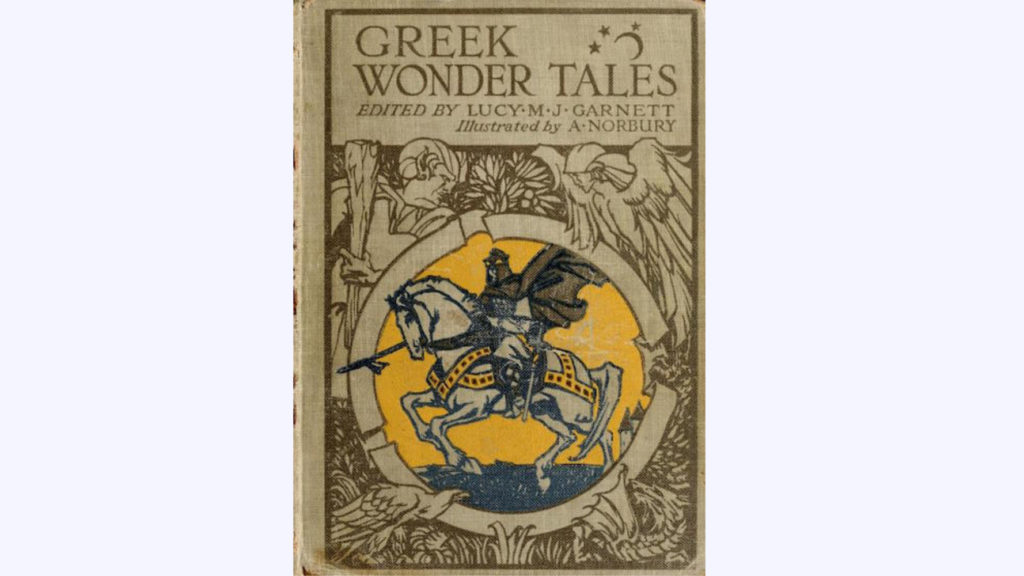 As Greek-Australians, we seldom relate Greek fairy tales to our children. Such tales as are recounted, generally derive from the approved canon of the Grimm compendium, with a dash of Hans Christian Andersen, as interpreted by Disney. When it comes to Greek tales, these are invariably derived from the corpus of ancient Greek mythology, as presented by generations of western classical scholars. Of the fairy stories our grandparents were told on those long cold winter nights in the ancestral village, most of us know nothing, for these stories were simply not passed down.

Many of these stories are quite dark, reflecting a harsh reality, where the soppy sentimentality of the Disneyfied tales would have been incomprehensible. In the traditional Greek tale of the “Wild Man”, for example, the hero of the story, unlike the noble protagonists of many a western tale who remain steadfast and true in their pursuit of ‘true love,’ is instead advised to promise marriage to a succession of isolated and rather desperate Nereids (the ancient Greek term surviving to denote a fairy), in order to gain gifts from them, such as an understanding of philosophy.

Similarly, in the story of “the King of the Birds,” the heroine has absolutely no compunction in killing baby snakes, pigeons and eagles when she hears their mothers tell their offspring that by their murder, the heroine will acquire magical powers that will assist her in her quest.

In “The Mother of the Sea,” a son backs out of his promised marriage, incurring the wrath of the Sea, personified as a female, which makes sense considering that in Greek, the word for that element takes the feminine gender. Rather than seek to make amends, the son’s wife is enlisted to resort to a number of stratagems to further deprive the Sea of what is hers.

Likewise, in the story of the “Nereid,” the heroine, in managing to break the spell that holds her unresponsive prince in thrall to a fairy, she causes him to abandon his wife and child, as if this is the most natural thing in the world, while in the story of the “Stringla Princess,” a prince attempts to kill his baby sister, convinced that she is a man devouring monster in human form. Eventually, after exile and many vicissitudes befalling him along the way, he manages to kill her. So much for happy ever after.

This then is a largely, but not entirely, world of survival of the fittest, or wiliest, where there is no room for arcane codes of chivalry, where loyalty is subjective and restricted according to a specific moral code, where the destination, not the journey counts, and where success is everything. As such it is completely alien to the prim and proper fairyland our children currently inhabit. It also however, provides valuable insight into the formation of the psychology of their ancestors and illuminates the value systems that informed the actions and thoughts of first-generation Greek migrants in Australia. In absence of a knowledge of these tales, we approach these value systems and the cultural lore they encode, not as lineal descendants, but as foreign entities.

Significantly, in a society that traditionally silenced or at least minimised the female voice, it is important to note that these tales were composed, related and passed on by matriarchal figures. It was a desire to allow those voices to be heard beyond the confines of the hearth that led English folklorist Lucy Mary Jane Garnett to learn Greek in Smyrna and, towards the end of the nineteenth century, to embark upon extensive fieldwork, travelling throughout Greece and Asia Minor, recording folk songs and folk tales. Quoting Henry Fanshawe Tozer who, after visiting the Ottoman Empire, observed “throughout our journey, the female sex may be said not to have existed for us at all,” Garnett resolved not just to record the folklore of Greece but also to specifically emphasise the life and status of Greek women in a number of publications, one of which was a magisterial translation of fourteen traditional Greek folk tales in 1913, on the eve of a World War that would cause western civilisation to question the myths underpinning its foundations, entitled: “Greek Wonder Tales.”

A hundred years later, the distillation of Garnett’s academic work, transposed to a child’s register, emerges fresh from the page and thoroughly compelling. In her introduction to the collection, she states that she translated the stories from various dialects, choosing to retain traditional names for such monsters as the, nereid, the stringla, the lamia, the stoicheio and the dhrakos, tracing their evolution from antiquity, often into completely different beings, the dhrakos, for example, coming to signify not a dragon, but a giant, and highlighting the manner in which the ancient Fates gradually through the ages transform into fairy godmothers. In order to reinforce her argument that despite millennia of Christianity, many pagan motifs and practices persist among the Greeks the object of her study, Garnett also provides valuable anthropological evidence in her discussion, outlining how propitiatory offerings of honey, cakes and milks would be left for Nereids at locations they were believed to frequent and how shepherds avoided sleeping below poplars and plane trees at midday, lest they offend the stoicheia, descendants of the mythical hamadryads.

READ MORE: The hybrid paradox: both fascinating and disturbing

In the process however, she chooses to include literal translations of Greek expressions that mean that not only the plot but also the colourful idiomatic way in which it was originally conveyed by the Greek women from whom the stories are derived, is reproduced and thus saved. Thus, Garnett manages not only to give voice to these women but also, to allow the cadences of that voice full appreciation. Expressions such as “and if you saw him, so did I,” a literal rendering of «αν τον είδες εσύ, τονείδακιεγώ», “and they lived happily and we more happily still,” (και ζήσαμε αυτοί καλά κι εμείς καλύτερα) and “Scarlett thread, spun on the wheel, twisting on the twirling reel,” which expertly translates the traditional verses recited at the beginning of all Greek fairy tales: «Κόκκινη κλωστή, δεμένη, στην ανέμη τυλιγμένη…» revivify the ancient matriarchs beyond the grave and afford them an immediate connection to the reader. They form the tissue of meanings that sustain their common discourse.

Some of the tales forming the collection are eerily reminiscent of western tales. The “Snake-Prince” is exactly the same story as Beauty and the Beast, save that the Beast is a snake. Given that this story is said to have originated in France in the sixteenth century, it would be fascinating to attempt to trace the reception of the story in the Balkans and the route of its travel. Other stories, such as the “Tower of the Forty Dhrakos and the King of the Golden Apples,” appear to be an amalgam of the western tale of the Valiant Tailor, mixed in with the ancient myth of the apples of the Hesperides, and the Ottoman lore about the “Red Apple Tree.” “The Sugar Man,” seems to be a retelling of the myth of Pygmalion from a female perspective, with elements of the “Gingerbread Man,” thrown in for good measure. One of the tales, that of the “Quest of the Golden Wand,” contains embedded within it, a retelling of the blinding of the Cyclops in the cave, with the hero escaping, like Odysseus, clinging to the underbelly of a sheep, a testament to how narrative elements endure, or how rapidly rediscovered elements are ingeniously woven into the discourse, thought and tension, made flesh.

The subversive subtext of many of the tales is one that I have also been able to identify in many first generation Greek-Australian women writers, notable the late Katerina Baloukas, who while ostensibly adhering to a ‘canon’ of subject matter and of expression, resourcefully manipulate those very elements in order to provide nuances that tell create a parallel narrative with a completely different message. Such writers, many of whom were brought up on the same fairy tales Garnett salvaged in her book, are the authentic descendants of that tradition and we cannot fully understand them or appreciate the manner in which they wield their tools unless we appreciate their unique narrative background. Considering that the act of writing negotiates an agreement between what we see and what we know, between memory and impulse, this makes a study of traditional Greek fairy tales all the more urgent, given that increasingly, first generation Greek-Australian migrant authors’ voices are being stilled and there is a linguistic and cultural discontinuity between them and the latter generations.

English translations such as Garnett’s, which despite being a century old, are readily available, do much to assist to bridge the gap and rather than impose upon us, an aesthetic imperium, provide us with the ability to gain a new perspective on the corpus of literature produced in the Greek language in Australia, by first generation female writers and its place within Greek literature as a whole, even as the irony that it is through the inspired intervention of a westerner that our quest for authenticity is mediated, is not lost upon us. May we too, vicariously through Garnett’s work, symbolically send for our grandmothers from Syra, as in the story of the “Talking Wand,” and in the place of the boiled beans she had formerly eaten, offer her roast partridge, of the literary variety, instead.