Greek government calls on diaspora to invest in Greece, but not just for ‘sentimental reasons’

“I would like the Greek Australian Diaspora to become Ambassadors to help Greece play a leading role in innovation and technology,” says Greek Deputy Minister Christos Dimas Dr Christos Dimas, Greece’s Deputy Minister of Development and Investment in charge of Research and Technology, is the youngest minister in the Mitsotakis government. The 40-year-old is one of those tasked with leading Greece into the future despite the challenges of a recent economic crisis and a global pandemic.

He presented Greece’s plans in R&D to 50 Greek-Australian participants of the Australian Chamber of Commerce and Industry’s Dialogue series, taking the baton from Greece’s Prime Minister Kyriakos Mitsotakis who invited Greek Australians to work from Greece last month when he asked, “Why not work out of Kastellorizo?”

Dr Dimas continued with the Greek government’s hard sell on Monday, urging expat Greeks and diasporans – especially educated ones – to consider Greece not just for holidays but as a place to invest and build their future. “The reason we are trying to transform the Greek economy – which is not an easy case – is because we want to invest in these young individuals,” he said. “We do have the advantage that most Greeks do want to study. It’s what our grandparents or parents would tell us, day by day, that ‘you need to get a degree, you need to get a degree’…”

Speaking of Greece’s human capital, he pointed to a skilled labour force. “But we have a skilled labour force which has not taken advantage of their skills so, in the years of the crisis, you had engineers driving taxis or providing waiting services which is honourable, it is an honourable way of living, but it is not the most effective way,” he said. “The reason why you’ve seen many young Greeks coming to Australia in the last decade is exactly because they didn’t have the opportunity to build their dreams within their country. That is what we are trying to change here. By attracting companies that invest in R&D we do believe that new opportunities will open.”

…in the years of the crisis, you had engineers driving taxis or providing waiting services which is honourable, it is an honourable way of living, but it is not the most effective way.

The Mitsotakis government believes it can overturn the current situation, where Greece sits 20th out of 27 member states on the European Innovation Score Board. “We believe this is something that is not relative to our capabilities,” Dr Dimas said.

The government has upgraded the role of the private sector in research and innovation, with Dr Dimas pointing to the majority of investments from 2011-2017 coming from the national budget, however since 2019 this has changed with more funding from the private sector. “The national budget remains extremely important, but now the majority is from businesses,” he said, pointing to 2017 as the first year when private funding surpassed money from state coffers.

Dr Dimas said the plan of increased tax incentives, organising innovative ecosystems, increased incentives for research and opening up wages in science is working. In 2019, GDP expenditure for R&D increased from 1.21 to 1.27 per cent though the European target is 3 per cent. By tripling the super deduction rates and simplifying procedures for R&D, the Greek government hopes to accelerate investments in this sector. It is believed that this alone will increase R&D expenditure in the next three years by more than 300 million euros.

“We believe that 2020 will be a better year (than 2019), not only due to the tax incentives we have given but also because, in the first eight months of the government starting July 2019 up until March 2020, when the pandemic began, we had managed to attract important companies to Greece, whether that was Pfizer, building a new R&D Centre in Thessaloniki, Cisco, EY, Microsoft with three data centres in Attika and various other companies,” he said. “By looking at the details in the General Secretariat of Research and Technology, we’ve seen and we expect a good increase in 2020 in R&D spending (despite the pandemic).” 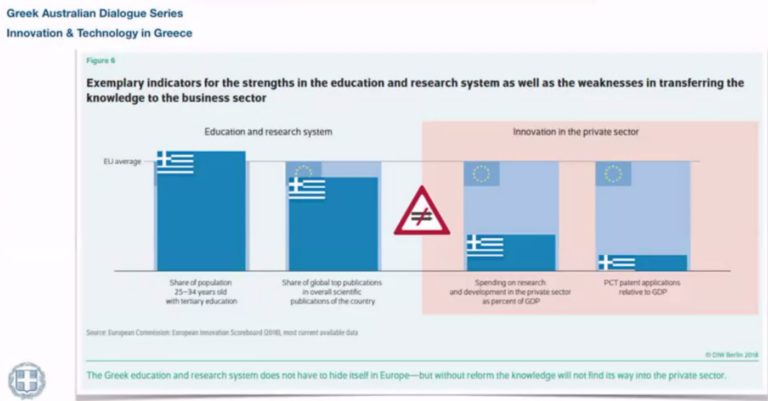 He offered a presentation of what Greece has done and its vision for the future with three main priorities: (1) Link research and innovation more effectively; (2) increase investment in R&D; and (3) connect our innovation ecosystem.

Horizon 2020 He spoke of Greece’s participation in Horizon Europe, an ambition 100-billion-euro research and innovation program succeeding Horizon 2020. “Every one euro invested in cutting-edge research through Horizon 2020 and Horizon Europe […] return to the real economy up to 11 euros,” he said.

General Secretariat of Research and Technology The Secretariat, which was under the aegis of the Ministry of Education, has now been moved to the Ministry of Development and Investment. “This is an action that marks the attempt to link more effectively research with innovation and entrepreneurship,” he said, pointing to a new building to house the facilities of the group at the unused Olympic facilities at Goudi while also ensuring finance for the development works through a donation from the Onassis Foundation. “This will save us approximately half a million euros per year regarding rentals and leases.”

National Council of Research, Technology and Innovation (NCRT) A council of experts has been established. The group consults with the Greek government in a series of issues. “It is giving us important feedback in a lot of different initiatives,” Dr Dimas said. “We do want to support research with a social footprint, but we don’t want to support research just for the sake of research.”

Greater research flexibility/salaries Research projects funded by EU programs or the private sector are now not subject to the restrictions of a public payroll, which in many respects has limited salaries in the public sector. “We now passed legislation which gives the opportunity to research centres and universities to give higher wages to scientists when the funding comes either from the private sector or competitive research projects,” he said. “This is extremely important because if we want to repatriate some of our scientists that left the country during the crisis they wouldn’t come back for 1,000 euros (per month) which is the public payroll. Now, since this money does not have to go according to the public payroll, we have already started seeing some moves from the scientific community where he had the opportunity to repatriate the scientists.”

European Investment Bank The government “moved quite swiftly in fixing three agreements with the European Investment Bank”: (1) the Hellenic Centre for Marine Research which involved the design and construction of new modern and fully-equipped oceanographic vessel for studies of Greek territorial waters and beyond, which will help marine research in Greece and EU projects; (2) an agreement with the National Observatory of Athens for the establishment of the Geosciences and Climate Change Observatory, a national research structure in Antikythera which is to become a reference station for monitoring climate and geophysical parametres; and (3) a collaboration with Demokritos for the expansion and modernisation of Lefkippos, a technology park, successfully facilitating the dynamic scale-ups of innovation driven-startups within a unique ecosystem of highly innovative R&D departments and top-notch research groups.

COVID-19 In April, flagship research action for the epidemiological study of COVID-19 took place with the participation of six research centres and four universities. “We practically united the scientists of Greece for the study of COVID-19 and we are happy to say that since last week we have applied and received the patent for rapid tests,” he said, pointing to “quick and effective” testing which will be massively produced once a suitable company to do this is found.

European Cohesion Money The Greek government is making use of this funding. One of the main initiatives has to do with Research-Create-Innovate, costing almost half a billion euros, with 866 projects.

Innovation Ecosystems An innovation district in Athens and an R&D technological park in Thessaloniki will help gather entrepreneurs, start-ups, research centres to create synergies. It is hoped that such clusters and matchmaking groups can help attract global firms to Greece. Dr Dimas hopes to become a “leading player” and not only repatriate Greeks who left during the brain drain but also draw talent from SE Europe.

Thorax An agreement has been signed with the Greek Ministry of National Defence for the creation of an information system which uses AI to help the Greek state make better decisions in real time.

Bilateral Agreements Dr Dimas spoke of the benefits of educational and research exchange, and said he would meet with the Australian Ambassador in Greece and Greek Education Ministry for further discussions on this. “Imagine Australian students coming to Greece in order to study archaeology or shipping or classics, and at the same time Greek students to study in Australia,” he said, pointing to other exchange programs which Greece already has in the EU.

Renewable Energy “We believe in the climate crisis, and if we don’t take action now the problems in the future will be much, much larger for all of humanity, and not just Greece so we are funding a lot of projects, and research and innovation has a central role to play,” he said, adding that 30 per cent of European funding in the Horizon program are going towards actions against climate crisis with a great effort currently being made in renewable energy – solar, wind and even hydrogen. He said that there is a detailed plan to decarbonise the economy as fast as possible and to detail a plan to help individuals in the sector smoothly transition to another job.

Elliniko Project The most important real estate project in the EU at the moment. “It is a project that will create a lot of working opportunities and will help Attica in terms of acquiring an extremely nice, visible park, which you all know the necessity of having,” he said, adding that the bidding process has been completed. The demolition of the old Athens airport has almost been completed.

Metro Dr Dimas said that the metro works are fascinating in both Athens and Thessaloniki for archaeologists due to the antiquities, however there have been delays due to that. “We are maintaining it to be clean and effective, however it still has important expansion opportunities,” he said, adding that extension programs are in place for all four lines.

“We are in a difficult neighbourhoods in the world,” Dr Dimas said when asked to address the ‘elephant in the room’, however he pointed to the stability in Greece as far as civil rights and stability. He said Greece’s location “gives us the opportunity to have a more leading role in the region” as the most logical choice to invest for someone who had interest in the region.

Australia’s Greek Trade Commissioner Katia Gkikiza said that “today is just the beginning” and pointed to a “one-way path for Greece”.