Rescheduling the fairytale: The return of Big Fat Greek Weddings 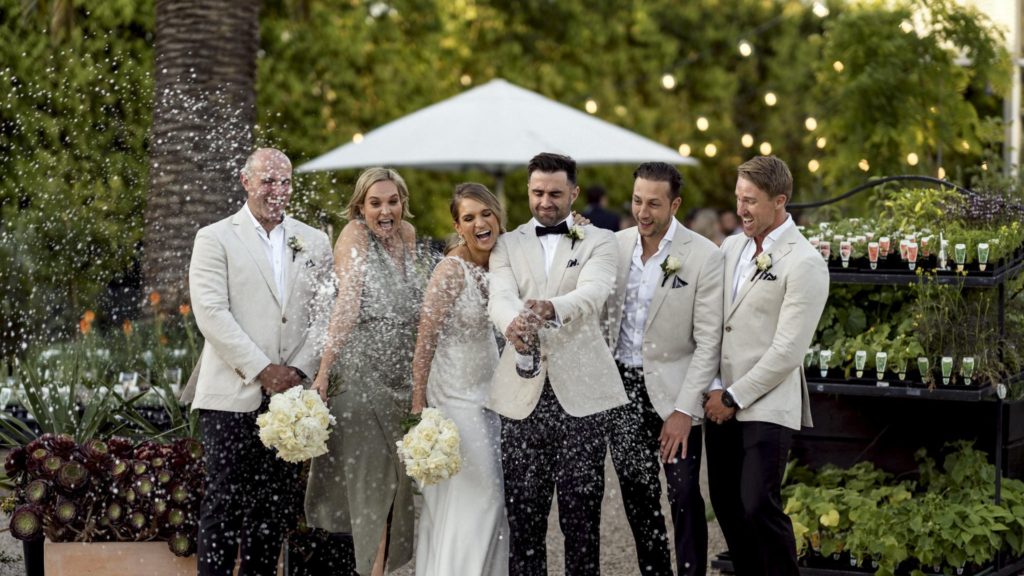 Newlyweds Mr and Mrs Constantinou pour one out for their big day Photo: Corey Wright Photographer

Couples have been rushing back to altars and into receptions to celebrate their weddings. This time, they can bring up to 150 people to celebrate with them!

One such couple was Terry and Emily Constantinou, who recently partied it up with family and friends, eight months after their original wedding date in April.

“We made the decision back then to push it back to the fourth of December and we’re quite lucky we chose that date because the restrictions eased…But we spent the whole year wondering if it would happen or not,” Ms Constantinou said.

The lead up to their initial date was just as uncertain at the time. As the coronavirus slowly took ahold of cities across Australia, the couple’s event manager asked if they had thought about possibly rescheduling their big day.

“It was a massive shock, we weren’t even really thinking about that until our event manager called us and said ‘have you thought about postponing the wedding?’ and we hadn’t really considered that at that stage. It was a pretty emotional day,” Ms Constantinou said.

Despite his optimism, Mr Constantinou saw “the writing was on the wall” and the bride and groom-to-be realised the issue was much bigger than they originally anticipated, watching on as restrictions cut down guest numbers from the hundreds to single digits.

Thankfully, all those involved with putting the wedding celebrations together were able to accommodate the new date.

“I would call my suppliers and they would say ‘all the brides are rebooking’ so we felt pressured to rebook,” Ms Constantinou said.

“With the new date we had to get back in touch with the venue, the caterers, the celebrant we wanted, the photographer and videographer we wanted. We had to align all these stars and if one was out it wouldn’t work, but it worked out that everyone was good to go for the fourth of December,” Mr Constantinou added.

Mr and Mrs Constantinou were forcibly given a few extra months to mull over their wedding plans, but as 4 December approached their blueprint looked a little different.

“We learnt a first dance for the first wedding, then we stopped practicing. We were initially planning a wedding for 20 people and so we weren’t going to do one. But to have to learn it again in two weeks, it was too much pressure and we’ve got too much to do,” Ms Constantinou said.

On the flipside, the gift of time meant the couple were able to further grow in their loving relationship, prompting them to reassess their original vows.

“Once we cancelled the wedding, we closed the computers and didn’t look at the documents for months. Then you open them up, and not that you’re a different person but you go ‘oh God, I wrote this?’,” Mr Constantinou laughed.

“I went back to the drawing board and I had a bit more to reflect on from the last six months and the intensity of the lockdown as well has strengthened our relationship and our family, so you want your vows and your speech to reflect those experiences too.”

READ MORE: Trikala: The first wedding to be broadcast live to Australia (Video)

As a second generation Greek-Australian, Mr Constantinou was also glad he could brush up on his ‘Greek’ speech.

The newlyweds resent invites a mere two weeks out from their big day, after originally planning to scale back a 220 guestlist down to 20, but as whispers of restrictions easing further arose in later November, the young couple held out.

“Dan Andrews announced about a month ago that on the 27th of November it would go to 100 people for weddings, which is a big jump from 10, but there were so many rumours going around the industry. Our caterers said that’ll be 100 people for the ceremony and only 10 for the reception,” Ms Constantinou said.

Despite being allowed to have additional guests by their side, Mr and Mrs Constantinou still had to make the difficult decision to cull their guestlist.

“Everyone’s been pretty good with it though, they understand. At the start we had the intention to invite as many people as we did, but people get there had to be a cutdown, and we had to draw a line,” Mr Constantinou said.

Before they knew it, their little boy Zac was running down the aisle into his father’s arms, and the young parents found themselves standing before their family and friends, exchanging vows.

Above all, Mr and Mrs Constantinou’s biggest wish, aside from being able to carry out their big day is for their loved ones to enjoy their time in a social setting that had once seemed to be a distant memory.

READ MORE: Nothing could stop this man from marrying the woman of his dreams; Not even COVID-19

“We’ve done as much as we can to make it go smoothly. Whilst we’re celebrating ourselves, we want other people to celebrate and have as good a time as we will. To be honest, this is probably the biggest event most people will have attended all year,” Mr Constantinou explained.

Guests still had to have masks in tow when visiting certain areas of the venue like the bathroom.

Since their wedding more restrictions have been eased in Victoria, with wedding goers able to dance but at a cap of 50 people on the dancefloor, with non-seated service now permitted.

Surrounded by family and friends, the newlyweds sung Atomic Kitten’s Whole Again, closing off a night they will never forget.