The Mandalorian and Ancient Mediterranean Societies: The Way of The Force?

The Jedi Order calls to mind many of the aspects of Greek philosophy as embodied in Plato’s Republic. They are reminiscent of Plato’s philosopher king retreating to a cave to achieve gnosis, a higher level of wisdom. 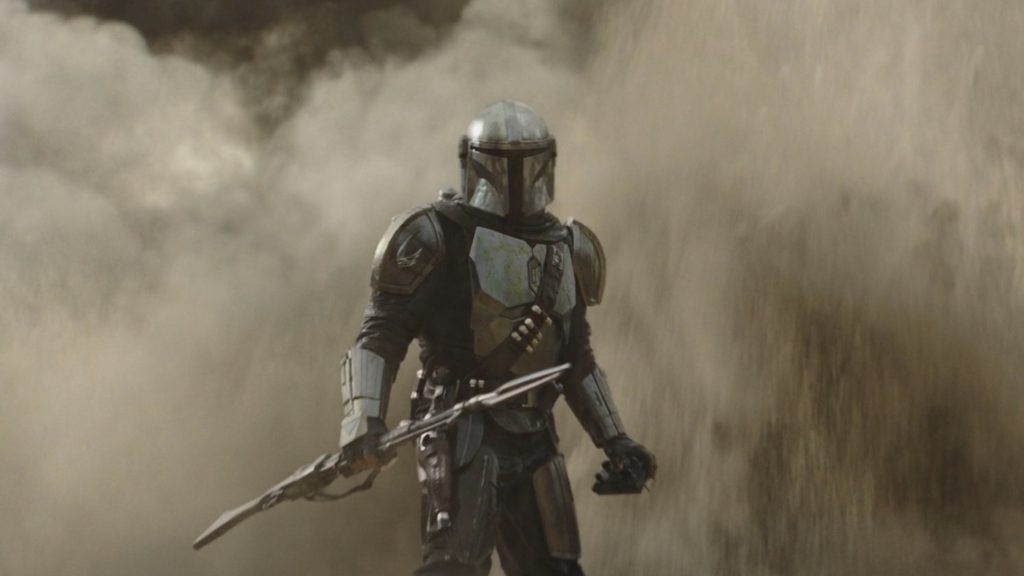 Din Djarin in The Mandalorian. All photos: dmedmedia.disney.com

The Star Wars media franchise has always drawn heavily from myth, history, and literature. And, its most recent entry the Mandalorian, is no exception. The Mandalorian is a reference to the central character, Din Djarin, a member of the Mandalore culture. Djarin was not born a Mandalorian, but as we see in flashback, he was adopted as a foundling by the Mandalore when his parents were killed by battle droids during the Clone wars. However, he is raised as a Mandalorian, a culture which survives by their wits and technology as bounty hunters and mercenaries.

We were first introduced to bounty hunters in the Star Wars odyssey in the form of Boba Fett, who captures and sells Han Solo to Jaba the Hut in the Empire Strikes Back. Although Boba Fett wears Mandalore armour, he is not a Mandalorian, but inherited the armour from his father. In the Ultimate Star Wars and Philosophy book, Fett is regarded as an ethically challenged individual whose main concern is capturing, delivering, and getting paid for his bounty.

The Mandalorian fleshes out the social and ethical characteristics of the Mandalore as well as of some of the other cultures eking out their survival in the Star Wars’ galaxy. The action takes place against the tatters of destructive wars and planetary collapses left in the wake of the ongoing struggles between the Empire and the Republic. Over two seasons of the Mandalorian, we are introduced to Din Djarin and his quest to return “the child,” to the Jedi. The child is a fifty-year old toddler (!) named Grogu who is force sensitive and descended from the race of creatures that included Jedi Master Yoda. The series begins with Din Djarin’s quest to capture an asset, which turns out to be baby Grogu, and collect the bounty on his little green head. Instead, Djarin forms a bond with the child, and is tasked with returning the foundling to the Jedi by the mysterious Mandalore armorer.

We learn that Mandalorian armour is made from a special metal called Beskar, which is indestructible to most weapons including lightsabers. We also learn that there is a code of ethical behaviour the Mandalore adhere to, called the “Way,” which has split into variant versions as different groups of Mandalore became dispersed after the destruction of their planet. Din follows a particularly rigid version of the Way, which prohibits him from removing his helmet in front of others.

There is a subversive aspect to the Mandalorian, which I found appealing as the Way requires adherence to a strict code of personal responsibility, paying ones’ debts, largely through barter or the exchange of Beskar. This code of personal responsibility enables many of the characters to live their lives in an orderly fashion in an environment that recalls the frontier of the American wild west, outside the control of Imperial or Republic authorities scattered throughout the galaxy.

Din Djarin’s weekly adventures to track down information that will enable him to return the child and fulfill his quest becomes an epic odyssey of adventure through ongoing negotiation of relationships, alliances, and exchanging of favours to attain his goal. The quest is a futuristic version of the buddy movie where Din and Grogu form bonds of loyalty and familial affection. Viewers are treated to occasional glimpses of Grogu learning to use his force powers (do the hand thing, baby!), while also engaging in comical childlike behaviour, usually involving food.

Thus, like both Achilles and Gilgamesh of early epic, baby Grogu has semi-divine aspects paired with Din Djarin’s stoic sense of duty and discipline. The pairing both calls to mind Patroclus who becomes a role model to the younger Achilles as well as Enkidu who becomes humanised through his friendship with Gilgamesh. In each epic tale the pair are changed by their bond of affection which is forged through shared experience. In all of these epics, the friends are also tragically separated, our ancients by death, and Grogu by Din Djarin’s quest to return him to the Jedi to finish his training. An element of danger is added by the fact that the Empire is seeking to capture or buy Grogu to increase its power through acquiring his force sensitive blood.

The weekly quest for survival as Din and Grogu, pursue their goal operates on the basis of pre-monetary economy that is reminiscent of maritime trade in the ancient Mediterranean. Food and drink are sometimes obtained through a shared code of hospitality, exchanging mercenary acts for information or needed supplies, transporting individuals from one port to another, providing Beskar ingots in exchange for ship repairs, and even trading spices. In other words, things haven’t changed a lot since the Silk Road brought needed goods from Asia to Mesopotamia or ships transported copper from Cyprus to Crete.

The indestructability of Beskar calls to mind the invention of iron, whose strength played a role in the transformation from an Age of Bronze to an Age of Iron in the 12th century BCE. In addition, special knowledge and secrecy play a role in the forging of Beskar armour by the Mandalorian armorer, a mysterious woman with the specialized and secret knowledge to transform Beskar into armour and who serves as chieftain and spiritual leader of Mando’s clan. It may be no accident that her more elaborate helmet resembles a Spartan helmet. The metallurgy plotline recalls the religious practices shrouding metal technology in mystery in Cyprus where metal objects were made under the auspices of the temple complex at Kition or under the protection of the Ingot God at Enkomi.

The Star Wars universe is organised along ethical codes that we can trace back to the classical world, whether it’s the militarised and authoritarian order of the Empire or the enlightened world envisioned by the Jedi Order of the Republic.

The Jedi Order calls to mind many of the aspects of Greek philosophy as embodied in Plato’s Republic. The Jedi Knights renounce worldly goods and attachments to develop their mental and physical perfection. The wiser the Jedi, the more isolated they seem to become. They are reminiscent of Plato’s philosopher king retreating to a cave to achieve gnosis, a higher level of wisdom (think Obi Wan Kenobi, Master Yoda, and Luke Skywalker in the Last Jedi).

There is much hand wringing and pearl clutching when young Luke takes a break from his training to save his friends, while being forced to sever his attachment with his mother sets young Anakin on his path to the Dark Side. Becoming a Jedi requires a certain preachy type of sacrifice and idealism.

As a long-time Star Wars fan, I found myself gravitating away from the Force to the more anarchic, yet Stoic Way of the Mandalore as an ethical code exercised through daily practice of self-restraint, personal responsibility, and loyalty to others. The Way gains power and is maintained through constant re-enactment in daily life. In the end, the more authoritarian religion of the Jedi seems to win out when Grogu is convinced to leave Din Djarin to finish his Jedi training. However, we are told that finishing his Force training is critical to Grogu being able to protect himself from capture and there are two more seasons of Mandalorian adventure that may see our heroes re-united.

Louise A. Hitchcock is Professor in Archaeology Historical and Philosophical Studies at the University of Melbourne. Professor Hitchcock has gained extensive archaeological experience in the east Mediterranean, conducting excavation work in Israel, Egypt, Syria, Crete. She was as Parsons Fellow at the American School of Classical Studies in Athens, and a senior Fulbright Fellow at the Cyprus American Archaeological Research Institute in Cyprus.