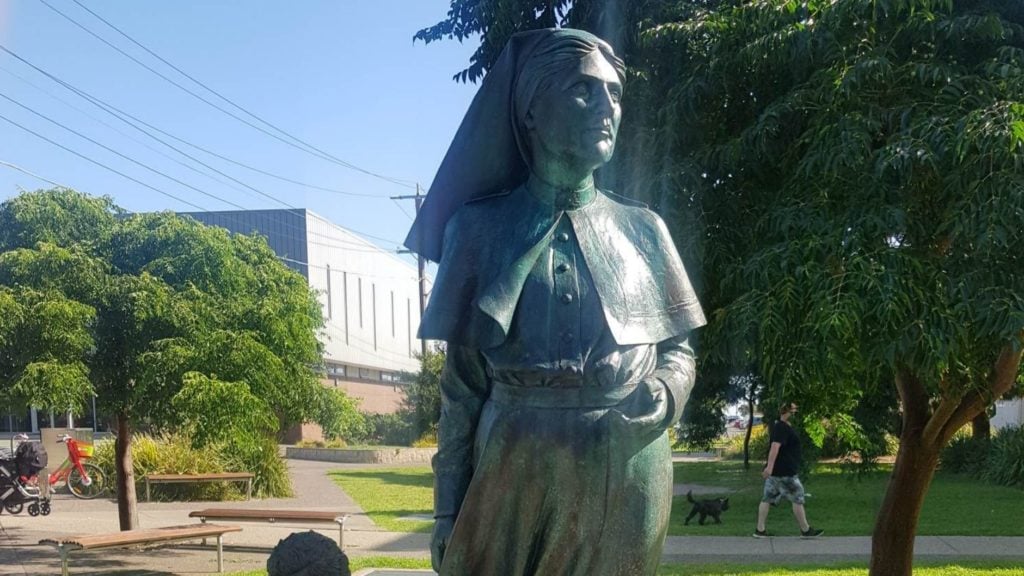 Melbourne’s iconic Lemnos Gallipoli Memorial which stands in the leafy Lemnos Square in bayside Albert Park has been restored to its former glory.

It was reported in Neos Kosmos that late last year the Memorial had been vandalized. The statue of the Australian nurse had been partially spray-painted by persons unknown.

However quick action by local residents saw the person responsible interrupted and his vandalism stopped. If it wasn’t for their brave action who knows what further damage may have been done.

The Lemnos Gallipoli Commemorative Committee was notified by a Melbournian of Lemnian heritage, who had been contacted by the residents who had intervened. The Committee then contacted the Port Phillip Council, who took action to secure the Memorial and commence its restoration. In consultation with the creator of the sculptures – Peter Corlett OAM – the Council has now restored the Memorial. This required significant work and attention by the Council’s skilled staff. Recently members of the Committee accompanied Peter Corlett on a visit to the restored Memorial.

In gratitude for the action of its local protectors, the Committee has presented the residents with a signed complimentary copy of Lemnos & Gallipoli Revealed: A Pictorial History of the Anzacs in the Aegean 1915-16. “Our sadness at the vandal’s actions is tempered by our gratitude for those who have come to its aid so quickly. It is testimony to the fact that the Memorial has earned a place in the hearts of the locals who have come to love its presence in their community,” he said.

READ MORE: A view of the Aegean by Dimitris Boulotis, the photographer of Lemnos

The Memorial is the location for the annual Lemnos Gallipoli commemorative service held by the Committee every year since 2015, with the exception of last year due to the COVID restrictions. The Committee looks forward to re-commencing its commemorations in August later this year.

Jim Claven is a trained historian, freelance writer, Secretary of the Lemnos Gallipoli Commemorative Committee and author of Lemnos & Gallipoli Revealed: A Pictorial History of the Anzacs in the Aegean 1915-16.