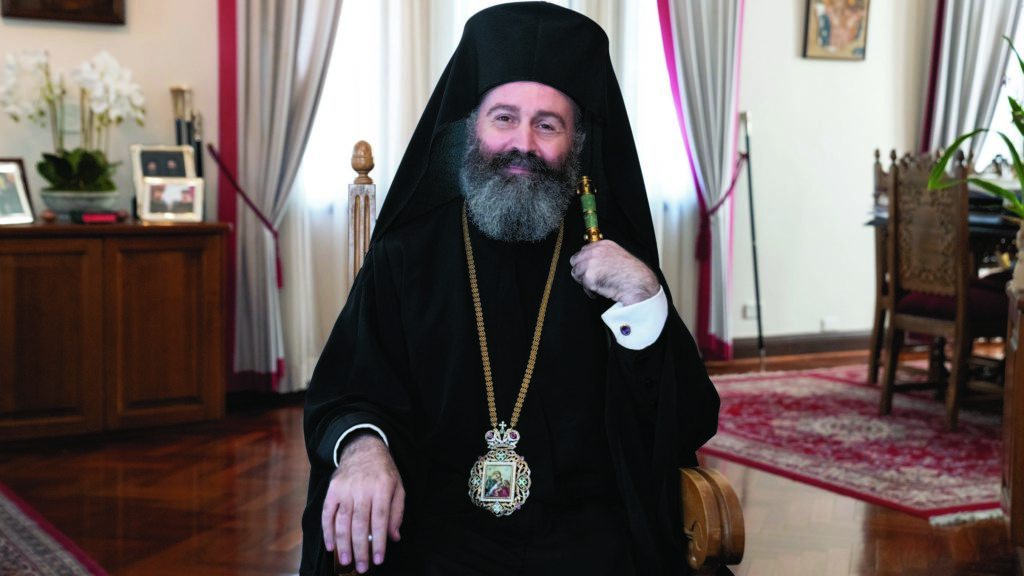 Life is what it is, a journey and as such we mere mortals who walk upon this earth do so in order to survive the challenges and ravages of time. On my odyssey of life I have found that whenever slings and arrows laced with lies have been shot at me, the light of truth seeks out the innocuous shadows and opens the realms of darkness to a bright new world.

Archbishop Makarios, who has not been long in his role as the spiritual father of Australians’ of the Greek Orthodox faith has been the target of a few  that belong to a bygone era.

In brief, the Archbishop Makarios, under his leadership, has been unjustly accused of misappropriating funds from the public coffers so to speak. Furthermore he is being accused of a lavish lifestyle befit to that of a Byzantine Emperor.  All mere fibs of course!  Those of us, who have survived the misfortunes of life, know only too well the harm that is associated with elements of lies, untruths, misinformation and media character assassination.

I must say that I am appalled that the few have seen fit to denigrate a man of the cloth who has not been long in the job so to speak. From my point of view, I see that Archbishop Makarios has been reaching out to all Orthodox communities inherited from his predecessor’s umbrella of faith. I take for example the vibrant Greek Orthodox community of Melbourne, Victoria led by that charismatic and well known President, Bill Papastergiadis. Sources close to both men indicate that there is a positive relationship between the two.

When Archbishop Makarios arrived in Australia he made sure to contact Bill Papastergiadis for his insight on Australians of Greek origins. Both men appear to have come to the same conclusion that although Australian Greek communities and the Orthodox faith are separate, they can both live in harmony with one another. This is not surprising given that both are leaders in their own right, well educated and both groomed for high office.

From an Ecclesiastical point of view, the new Archbishop has clearly stated that the Greek Archdiocese of Australia must be associated with the government of Greece and that of the Ecumenical Patriarchate located in Istanbul (Constantinople), Turkey. Archbishop Makarios appears not to be interested in power for powers sake but merely to reconcile all the Greek Orthodox Church communities. This is in my view an admirable odyssey of faith

Archbishop Makarios in spite of his good intentions is reminiscent of, Ulysses (Odysseus), on his journey facing many challenges, trials and tribulations before he was able to succeed in reaching home. A review and analysis of claims made against the Archdiocese of Australia and that of Archbishop Makarios by interested stake holders revealed the following:

The ABC is alleging that “a group of taxpayer funded aged care homes funnelled approximately $31 million into one of Australia’s largest churches”. In other words the ABC is claiming that funds have been transferred from Saint Basil to the Greek Orthodox Archdiocese of Australia. According to sources within the Archdiocese, this statement is utterly false and malicious. The Archbishop is removed from the management position of St Basil Fawkner key people, allowing with transparency all state authorities to investigate the measures and reasons for these 45 human lives having been lost.

A.     The ABC alleges that Archbishop Makarios, “ceremonial gowns of luxurious silks and wool in vivid hues, embroidered with gold thread, cost up to $30,000 each, according to sources linked to the church”. The same Archdiocese sources as above state that this is false. The Orthodox Priest Vestments, made by golden threads, is a tradition that comes from the Byzantine era going back centuries. This dress code has symbolisms for the Orthodox faith and tradition. No public funds were used for the Archbishops attire. It’s not something of a scandalous nature nor is it something new.
B.     The ABC allege that, ‘the Greek Orthodox Church bought a $6.5 million Sydney apartment with harbour views for the Archbishop.”  The truth of the matter is as follows”: The apartment was not chosen by Archbishop Makarios himself but rather institution of which he is the leader. The title of the apartment belongs to the Australian Greek Orthodox Archdiocese of Australia. The actual price of the apartment was $8.5 million and reduced by AU$2 million by the previous owner who was of the Orthodox faith willingly granted the $2 million to the Australian Greek Archdiocese of Australia, thus deducting the price. It is also interest to note that Archbishop Makarios has a much lower salary in the Orthodox World than that of his Bishops.

C.     The ABC relying on anonymous sources infer that under the leadership of Archbishop Makarios, St Basils aged care home, neglected the aged, poor record keeping, food of a low standard and basic hygiene practices not being carried out. In his defence, Archbishop Makarios took swift action and implemented appropriate measures to reduce and/or curb any further outbreaks of the coronavirus.

Why has this all come out now, who is behind it all, how did these matters become larger than life and what are the interested stakeholder advantages, are questions that required answers.  During my six month investigation into the above accusations against Archbishop Makarios, I came to the conclusion that journalists have been fed false information by  people associated with Archbishop Makarios deceased predecessor, Archbishop Stylianos. In the case of the ABC, to their credit, they would have fact checked all of their sources and involved their legal department before the article was published.

1.      Negative elements of the Old Guard (pro-Archbishop Stylianos) appear to have orchestrated a character assassination campaign against Archbishop Makarios and his leadership team.

3.      The Archbishop Makarios is surrounded and advised by well educated people who may lack the community knowledge, skills and experience as well as diplomacy and Australian political affairs.

4.      Individuals endeavouring to endear themselves to the archbishop with the hope of being offered a lucrative role within the Archdiocese.

5.      Individuals who were part of the inner-sanctum of the former Archbishop Stylianos have been ignored, thus losing their power base and credibility in the Australian Greek community.

I may well be wrong and will be the first to acknowledge my errors of observation and judgement, but my logic tells me otherwise and one could say that it is a Greek tragedy at best.

*Peter Adamis is a Journalist/Social Media Commentator and writer. He is a retired Australian military serviceman and an Industry organisational, Environmental & Occupational (OHS) & Training Consultant whose interests are within the parameters of domestic and international political spectrum.  He is an avid blogger and contributes to domestic and international community news media outlets as well as to local and Ethnic News. He holds a Bachelor of Adult Learning & Development (Monash), Grad Dip Occupational Health & Safety, (Monash), and Dip. Training & Assessment, Dip Public Administration, and Dip Frontline Management. Website: abalinx.com