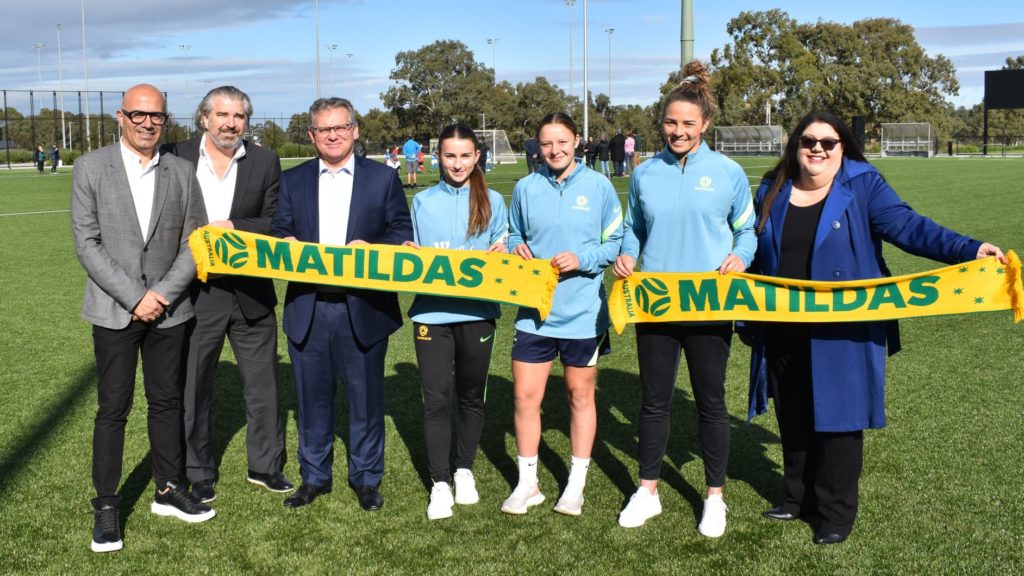 Antonella Care (right) shares the news of her presidency with the fitting announcement of the Matilda’s making Victoria their home Photo: Football Victoria

Six years after joining the Football Victoria (FV) team, Antonella Care has made history within the organisation after being the first ever female president elected in its 137 years of operation.

“When you are the first at anything it comes with responsibility. I think we’d be lying if we said it didn’t. It doesn’t change my position of advocacy but it does probably give me a stronger voice. My advocacy has always been for women and girls, for community football. This just lends an extra gravitas to the conversation,” she told Neos Kosmos.

“I’m not the first female president of football, there are plenty of others across the member federation that have female presidents that are my colleagues and ‘women in arms’ if you like, but it is important that we do it here because it is our growth.”

Ms Care brought her experience in government and business to help overhaul the dated systems and push for more inclusion, better governance and outreach.

“When I was elected back in 2016 for a four year term, it enabled me to work alongside Kimon (Taliadoros) as his vice president. We tackled a number of really important things that needed to be changed, I guess my mandate was really women’s football and it was really the opportunity to showcase community and grassroots even more so,” she said.

The new FV president is no stranger to the game of football herself, as her husband has been a part of the sporting community for over 20 years and is currently working with Victorian NPL team Oakleigh Cannons.

It was however her own father, who turned 83 just this week, who planted the seed that would lead her to her presidency today.

“Probably the one constant that I’ve looked to would be my dad. My dad used to take me to football games when I was a little girl growing up. I was the youngest of three girls so I became the ‘token buddy’,” Ms Care laughed.

“Even today as a man who is now 83 years old and looking after my mother as her primary carer, he continues to inspire me. He’s probably my hero and I look up to him very much.”

READ MORE: When the gloves come off: Q&A with Heidelberg goalie Natasha Stathopoulos

Caring by name and nature, the president’s focus during her tenure is to bring the world game to the forefront of Victoria’s sporting arena.

Thankfully for Ms Care and the team, it’s just a matter of building upon the strong foundation that has already been laid.

“For me it’s really about delivering. The funding for football hasn’t stopped, we’ve only just begun. We’ve been invisible in comparison to other sports in this state, we’re not invisible anymore,” she said.

“If nothing else, I really intend on ensuring we’ve got more world game funding, that we have more facilities in our grassroots and community clubs and in our NPL clubs for that matter that cater to not just girls and women, but to all abilities football, that have the capacity to have games and access and use and autonomy and not have to share their grounds.”

READ MORE: Victoria confirmed as the home of the Matildas

Ms Care also notes that the game is more than just players on a pitch and hopes new developments will also encourage others to come on board as coaches, lines people and match assessors.

In conjunction with the announcement of Ms Care’s new role, it was also announced that the Matilda’s new home would be based in Victoria.

The project to home Australian women’s team has been in the works since Ms Care joined FV and is perhaps a fitting way to kick of the first female presidency.

“I think when the opportunity came up for the women’s World Cup and we knew we were applying, it really kicked in the momentum,” she said.

“I’m beyond, beyond excited about it. It is only fitting that it is in Melbourne. Victoria is the sporting capital of Australia and it’s only fitting to have arguably, our most well known team to have a home here in Victoria. It’s a great opportunity.”

It is with his enthusiasm and excitement that Ms Care will carry through her duties as the new president, assuring the community that they will be valued and heard when it comes time to making decisions for the betterment of the game.