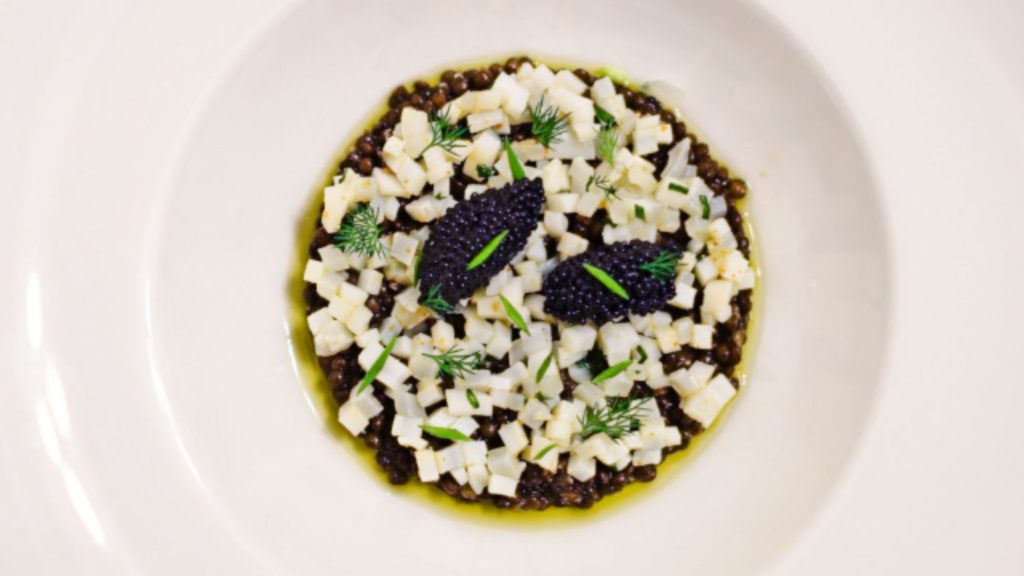 From Athens to Paris, from Kalamata to Santorini and Samos, Greek Chef de Cuisine Vassilis Alexiou has sought out the best products and producers. Connecting with farmers, he identified his favorite Greek products, including a variety of olive oils. Then he astonished Parisian chefs by incorporating eleven different extra virgin olive oils into his recipes.

Mr Alexiou’s wandering inspired the name of his current business and website, Wander by Paris. Along the way to his latest project on the Greek island of Samos, he incorporated local products into high cuisine at his gourmet restaurant in Santorini, changed the view of Greek gastronomy in Paris with his acclaimed L’Olivier bistro, and got into winemaking. Last year, he launched the sustainable minimalist restaurant Philia (which means friendship), using fresh, seasonal organic local produce from Samos.

Growing up outside Athens, Mr Alexiou visited many Greek regions, experiencing the variety of the country’s cuisine and its basis in local agriculture. For example, as he explained in an online seminar organized by Eumelia Organic Agrotourism Farm, his “connection to olive oil goes back before I had professional experience, because my uncle had some olives in Kalamata.”

His Christmas vacations were spent harvesting olives in his uncle’s groves. “I have memories of the taste of olive oil and how it smells” fresh from the mill.

This link to the origin of olive oil would come back to haunt him years later, in the 1990s and early 2000s, when some of the chefs he worked with—even in Greece—“used more butter than olive oil. At that time you had to cook with butter, because all the schools of chefs were French. We used olive oil mostly for the salad. It wasn’t an exceptional olive oil; no taste, no nothing, or even a bad smell. It was very surprising to me, because I had in my memory how a very good olive oil tasted.”

When Mr Alexiou first used olive oil in his own restaurant, he started with his uncle’s olive oil, “because every family in Greece has the best olive oil”—or so they believe. Alexiou thought the same “until I learned about other olive oils,” discovering a surprising range of textures and flavors, “and not only in different varieties—even in Koroneiki you can have different olive oils,” depending on various factors.

That realisation led to a revolution in Alexiou’s cooking, but one based on old advice. His grandfather had told him he should not only go to school and learn how to cook in the kitchen, but also learn about how food is produced, starting in the fields and olive groves where it grows. So Alexiou began to wander around Greece, meeting Greek farmers in Kalamata, Halkididki, and the islands. Talking with producers and sampling their products, he tried to decide which olive oil was best for him and his recipes.

The answer: “it’s many olive oils”—many varieties, and many brands—as long as it is extra virgin olive oil (EVOO). For example, for cooking he prefers a high quality Koronieki EVOO, because it keeps more of its healthy characteristics at high temperatures. “So even if you fry with the Koroneiki EVOO, you don’t have a burned olive oil, and you don’t have a rancid oil. But you don’t have to choose a very aromatic one” for cooking, since much of the aroma and flavor is lost when the oil is heated.

Mr Alexiou saves the exceptional EVOOs (almost a dozen of them) for finishing dishes. Generally using mild EVOOs for bitter recipes (such as greens) and spicier ones to give life to mild recipes (like potatoes), he acknowledges that very different combinations may also be desirable in some cases, depending on what you want for a given dish.

READ MORE: Reinventing the nostalgia of yiayia’s cooking in the MasterChef kitchen

When he was cooking in Paris, people asked why he used so many olive oils; “they thought I was crazy.” Other chefs used many kinds of salt, so he said, “you use 20 or 30 different salts for your food; you can try the same with olive oil, and you won’t need salt after that. If you dress your fish with a spicy olive oil, you don’t need salt.” You can use olive oil as a seasoning everywhere, Alexiou suggested – well, “maybe not in sushi,” but in everything else, in all cuisines.

Mr Alexiou does not want to make generalizations about olive oils coming from a particular olive variety, as he told Greek Liquid Gold, “because the taste and the feeling depend on the climate, the region, and the producer.” And even then, multiple variables such as the amount of rain or irrigation, the harvest time, and the production process can affect results. “The EVOOs I use are from specific producers that I know well, yet there are some differences every year.”

However, Mr Alexiou suggested that in general, we can say Koroneiki, Ladoelia, and Athinolia olive varieties produce spicy, bitter oils when cultivated under dry conditions, without irrigation; then “we can use them to wake up a recipe” that starts out mild, such as pulses, broccoli, or potatoes.

Beluga Lentils with Cuttlefish and Caviar: A Chef’s Recipe

In this elegant gourmet recipe written by chef Vassilis Alexiou, a spicy, full-bodied Manaki extra virgin olive oil from the Peloponnese in Greece gives a boost to the mild flavors of lentils, cuttlefish, and caviar. The recipe exemplifies this Greek chef’s interest in “waking up” or enlivening a recipe that starts out mild, by adding a bold extra virgin olive oil.

Directions
Olives
Remove the olive pits, then dry the olives in the oven for about 5 hours at 50 degrees Celsius. Allow them to cool, then cut them into tiny cubes.
Beluga lentils
Finely chop the onion, carrot, and garlic, then cook them in 50 ml EVOO at medium-high heat until soft. When they are soft, add the lentils, and cook for a minute. Then add the vinegar. Cook until the vinegar evaporates, then add water and the laurel leaf. Simmer for another 20 to 30 minutes until smooth. Remove the laurel leaf before serving.