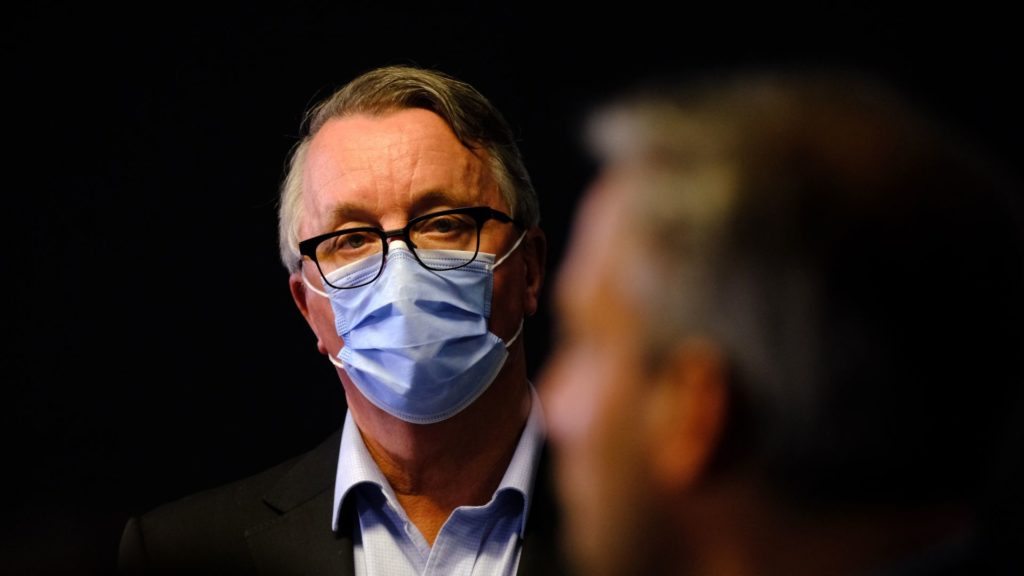 Minister Foley said that “we’re all going to stick together to get through this challenging period.”

And added that the 11 new cases reported on Monday “give us confidence that all the cases are linked.”

Mr Foley did say however that “there is still much to do in making sure that we bring all Victorians along that journey.”

Victoria’s Chief Health Officer Professor Brett Sutton said that Melbourne will not “snap back” to large crowds and sporting stadiums, even if the 14-day lockdown comes to an end later this week.

Professor Sutton added that it was “good news” that the new cases were all linked to known cases and did not reveal a new outbreak.

“We make those decisions on a day-by-day basis … It’s not something I can speak to now. It’s early days still.”

READ MORE: Two new cases of COVID-19, more exposure sites and support for those in need

Minister for Disability, Ageing and Carers Luke Donnellan on Tuesday announced a $30 million package to “ensure that no one will be left behind and to ensure that people have access to food emergency hardship payments.”
Mr. Donnellan said that $4.5 million will be “allocated for emergency food relief whether it be for food banks and students’ supermarket, whether it is for food banks outreach service for areas like Monash, Latrobe, and other areas where there is a large cohort of international students who are struggling.”

He said that that “multicultural Victorians will continue to access culturally appropriate emergency support and vital public health information, the package delivers $12.1 million to expand the critical work of the CALD Communities Taskforce.”

This package includes a “$5 million funding boost to the Priority Response to Multicultural Communities grants program, which helps local organisations deliver emergency relief, including culturally appropriate food.”
Minister Donnellan said that $7 million will ensure “culturally and linguistically diverse Victorians have the information they need to stay safe, with targeted communications, translation, and direct engagement, including support for organisations at a local level.”

Professor Sutton said that “in recent months there’s been dozens and dozens of face-to-face engagements” as well as Zoom and many “other engagements everyday with the northern suburbs communities.”

“Every single day we have sought an engagement opportunity in support of the cultural and linguistically diverse communities, mostly focused on vaccination uptake and vaccine hesitancy, or overturning some of them mythology around vaccine safety or efficacy.

“I’ve gotten positive feedback just this week from members of the Victorian Multicultural Commission around that engagement will always look to improve as much as we can.”