Amazons and Warrior princesses on celluloid: The legacy of Xena 20 years on 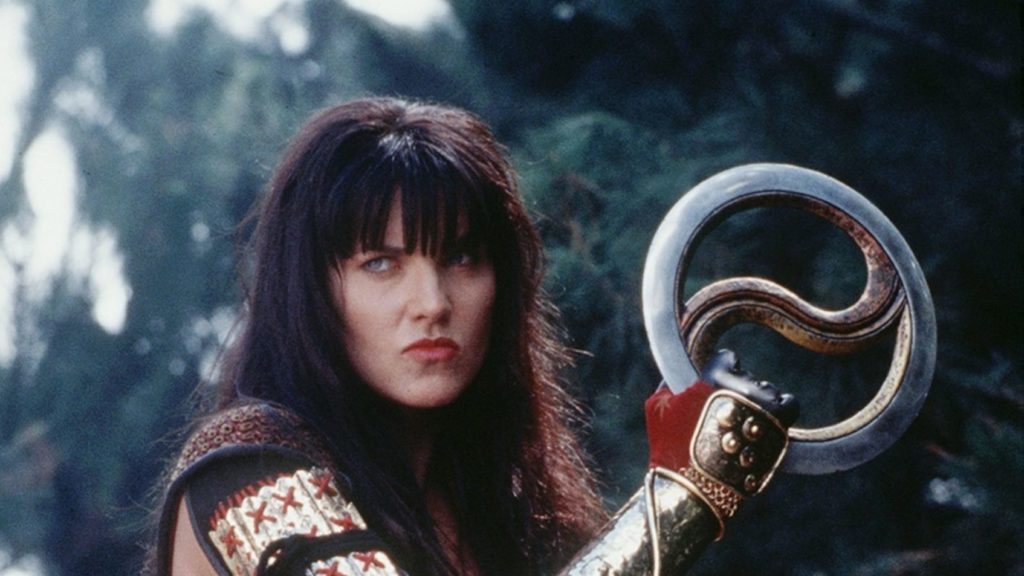 Lucy Lawless is outfitted for battle in her role as "Xena, the Warrior Princess," in this undated promotional photo. Photo: AAP via AP/USA TV

Xena the warrior princess, played by Lucy Lawless, captivated audiences around the world for six series with her high kicks, sword skills and distinctive war cry. The series followed her as she fought her way through armies, monsters and gods, alongside her soul mate and moral compass, Gabrielle (Renee O’Connor).

Xena travelled across space and time, taking us from ancient Greece to Rome, Egypt, Britain, China, India, Scandinavia and finally to Japan, where it all came to an end 20 years ago on June 18 2001.

Starting life as an antagonist of Hercules in three episodes of “Hercules: The Legendary Journeys, Xena” was so popular as a character that she was given her spin-off series that ran from 1995 to 2001. At the time, “Xena: Warrior Princess” was considered groundbreaking as it started a strong female action heroine and was the only popular adventure, action, science fiction or fantasy show that featured female leads without male counterparts.

On the 20th anniversary of the final episode, it is worth revisiting this great show and exploring why it was loved by a truly broad spectrum of viewers, from young girls drawn in by an active female role model and ancient history buffs to sci-fi fans and the LGBTQ community.

READ MORE: Xena trumps Hercules following Tweet that Antifa may be to blame for Capitol riots

Xena and the Amazons

A reformed warlord from ancient Greece, Xena was not an Amazon but a friend to the tribes of warrior women. To ancient Greek writers, the Amazons were women who fought and behaved like men and were unnatural barbarians. They have since been adopted as positive female role models who break with misogynistic stereotypes of womanhood – they live in a self-sufficient, female-dominated society as warriors and intellects. The term Amazon feminism is now used to describe a branch of feminism that promotes female physical prowess as a way to achieve gender equality.

Before Xena, the Amazons featured in the 1970s Wonder Woman series. Not quite the feminist icons we expect today, these women wore pastel-coloured negligees as they adopted a peaceful life without men on Paradise Island.

In Xena, while the Amazons may also have been attired in revealing costumes made of furs and skins, their separatist society values martial as well as academic skills. An Amazon tells Gabrielle that the Amazon world is based on “truth and an individual woman’s strength”.

The Amazons from Greek mythology lived apart from men, at the edge of the known world, and fought bravely against male heroes such as Hercules, Theseus and Achilles. In Xena, the Amazons also live in a matriarchal society and are skilled fighters who can hold their own against men.

The Amazons in Wonder Woman (2017) can be seen as Xena’s big-screen descendants. The costumes and fighting prowess of Penthesilea (Nina Milner) in the BBC drama Troy: Fall of a City (2018) has tinges of Xena. While the leadership ability of the immortal Amazon Andy (Charlize Theron) in the Netflix film The Old Guard, can also be seen as inspired by Xena.

READ MORE:Princess Diana vs the World: tragedy, arete, kleos, or something else?

But while Troy: Fall of a City and The Old Guard are aimed at older audiences, Xena was popular across all age groups. For instance, episodes of Xena were broadcast in the UK on Channel Five’s Milkshake! Saturday morning slot in the 90s and early noughties for young viewers. This led many young girls to adopt Xena as their role model.

Xena was also popular with gay and lesbian viewers. In the 1990s, openly gay relationships were mostly missing from popular US television series. However, Xena’s relationship with Gabrielle was interpreted as much as that of hero and sidekick as it was friends and lovers. Series producers began to play with this idea, for example, putting Xena and Gabrielle together in a sexy bath in season two fan-favourite episode “A Day in the Life”, so that for many, the subtext became the main text.

Although a lot of fans were dismayed that Xena died in the final episode they were treated to a long goodbye kiss between Gabrielle and Xena’s ghost. Series producers never openly made Xena and Gabrielle a lesbian couple. But LGBTQ+ fans championed their relationship, which is believed to have paved the way for openly gay relationships we see in television series today.

One of the joys of looking back at Xena 20 years on is its playfulness when compared with dark fantasy sci-fi fantasies like “Game of Thrones”. It features seriously badass female characters, and at times offers a serious message about female solidarity and feminism, but doesn’t take itself too seriously. Some of the special effects may now seem dated, but the storylines still ring true and the characters of Xena and Gabrielle can continue to be inspirational for a new generation of young female viewers.

Amanda Potter is a Visiting Research Fellow at The Open University. This article first appeared in The Conversation.