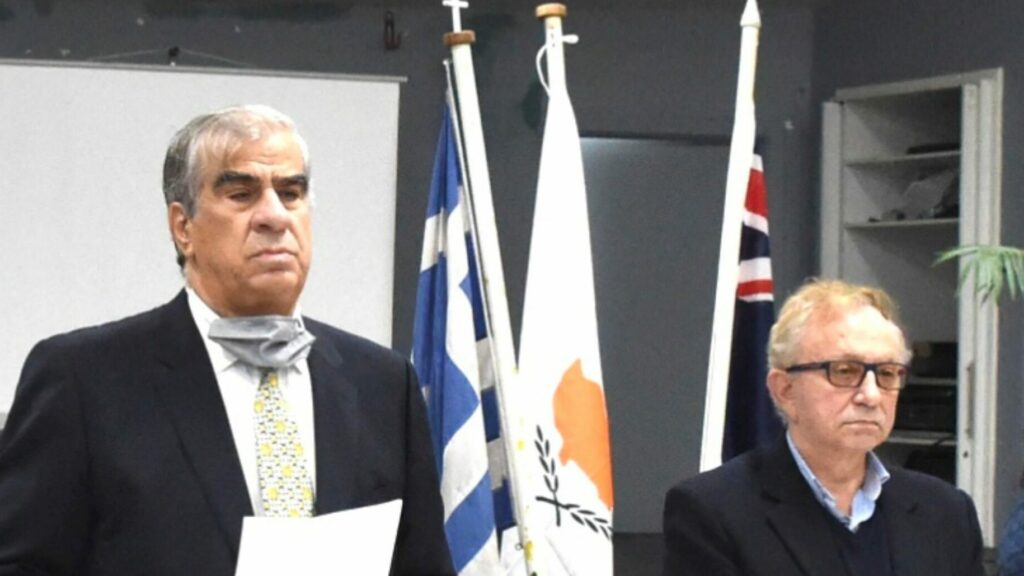 Cypriot Community President Stelios Angelodimou and Theo Theophanous, former MP, presented plans for a new building to the AGM and held a moment of silence for James Tsindos. All photos: K. Deves

The Annual General Meeting of the Cypriot Community of Melbourne and Victoria took place at the community’s headquarters at 495 Lygon Street in East Brunswick.

Members were informed of the financial situation of the group and the beginning of construction work for the multi-storey facility to house the community.

The approval of the demolition of the current building to create the new upgraded facility was voted on by members at previous general meetings and will see the construction of a multi-storey multi-purpose building behind the current façade, which is set to stay the same as the structure is heritage listed.

With council approval already secured and some modifications made to these, a meeting with officials with the Victorian Civil and Administrative Tribunal (VCAT) is set to take place.

The plans for the upgraded building will include a restaurant, shops, office space, an events hall, ground parking, etc. Part of the construction includes apartments, most of which will be sold to cover the cost of construction. Assurances were given at the meeting that the sales would procure enough funds so as to not financially burden the organisation.

READ MORE: Just us for Cyprus

“On the contrary, the higher goal is for us to secure some sort of annual profit,” Theo Theophanous, former MP, told the gathering, while adding that members would be further briefed on the project following the meeting with the VCAT.

Cypriot Community of Melbourne President Stelios Angelodimou said “what matters is for us to invest in our youth and the future, offering state-of the-art facilities and exceptional services to our members, without forgetting the creators of the Community, our elderly, who have supported our organisation for nearly nine decades”.

Mr Angelodimou referred to contacts with Cypriot haloumi producers, wine makers and the dean of the University of Cyprus for various collaborations, including securing scholarships for students.

A book, curated by Professor Anastasios Tamis, will be presented soon to showcase the history of Cypriot Australians, with particular emphasis on the Cypriot Community of Melbourne and Victoria. It is expected that presentations of this work will be presented around Cyprus.

The popular Haloumi Festival is expected to take place in Melbourne in November, adding that Cypriot Community of Melbourne was a pioneer in the creation of a special celebration to honour the cheese, and that now other such festivals have been adopted in Cyprus as well.

Asked about how more young people can be drawn to the community, Mr Angelodimou stressed that this is something he hopes for and outlined aims such as “to create motivations; to arm ourselves with strength and enthusiasm and work towards a common goal; to stand apart for our love and dedication to the continuation of our culture and civilisation,” he said.

“We, as a Council, have many dreams for the future. But we need your help so that the Community can continue to thrive and create over the coming years.”

The meeting was dedicated to two members who recently passed away: former PASEKA president Konstandinos Prokopiou and 17-year-old James Tsindos, son of the former Cypriot Community President Harry and Venetia Tsindou. A moment of silence was kept.