Campaign by the Australian Hellenic Council for treaties to be respected 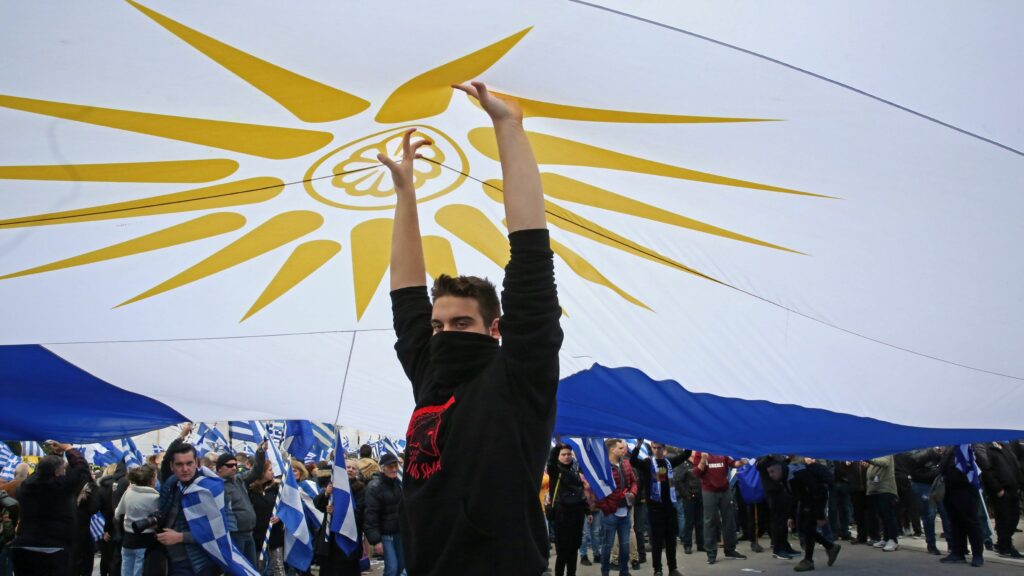 People from all over Greece protest against the Prespes agreement between Athens and Skopje regarding the name 'Northern Macedonia' for the Balkan country, at a rally in Syntagma Square, Athens, Greece, 20 January 2019. The naming dispute aroused after the breakup of Yugoslavia and the newly gained independence of the former Socialist Republic of Macedonia in 1991. Photo: AAP via EPA

The Australian Hellenic Council has recently embarked on a campaign to alert the Commonwealth Government and its agencies, including government-funded media on the continuing provocative attitudes of the North Macedonian community in Australia. Following the episode involving a Greek Cypriot who had fallen a victim in an attack by the so-called Macedonian Liberation Congress in Whittlesea, Melbourne, the national leadership of the Australian Hellenic Council, had adopted and sent the following letter to numerous Commonwealth and State government agencies, including SBS and BBC. A letter of similar content will be sent to Severna Makedonjia and the head of its government, Prime Minister Zoran Zaev.

The Australian Government, since 1993 and with bipartisan support, recognised the Former Yugoslav Republic of Macedonia (FYROM) complying with the resolutions of the UN, the EU and NATO. On 17 June 2018, Athens and Skopje entered into an Agreement (henceforth: the Prespes Treaty) that terminated the Interim Accord of 8 April 1993. Among others, the following provisions were agreed upon by the two countries:

* The official name of the newly established country shall be the “Republic of North Macedonia”, or “Republic of Severna Makedonija”.
* The nationality shall be Macedonian/citizen of the Republic of North Macedonia.
* An undertaking not to make or to authorise any irredentist statements, and shall not endorse any such statements, and that they will discourage acts, including acts of propaganda by private entities likely to incite chauvinism, hostility, irredentism, and revisionism against each other.
* The official language of newly established country, shall be called a Macedonian language with the descriptor that it is within the group of South Slavic languages, not related to the ancient Hellenic civilization, history, culture, and heritage of Greece.
* If Greek symbols constituting part of its historic or cultural patrimony is being used by Severna Makedonija, it shall take appropriate corrective action to effectively address the issue and ensure respect for the said patrimony.

READ MORE: The magic of Greece through summer memories

We note that this Treaty was made between Athens and Skopje, contrary to the desire of Hellenes across the globe, as reference was made to the term “Macedonia” (and derivatives), which is purely, exclusively, historically, and etymologically Greek. The resistance to this Agreement was expressed by Hellenes with mass protests in every continent, including several demonstrations in every major city of Greece, with the participation of up to 1.5 million people (in Athens).

The Hellenic world’s antithesis to the Prespes Treaty has been justified, given the continued and orchestrated disregard for this Treaty by Macedoslavic entities, persons, companies, and organisations, arguably, with the passive and indirect tolerance, and forbearance of Skopje, when, even in Australia. Thus, contrary to their signatures in the Prespes Treaty and their own Constitution.

* they continue to refer to their country as “Macedonia” and not “North Macedonia” as this is now their constitutional name and the name recognised by the UN..
* their nationality as “Macedonian” without the signifier” of “citizen of the Republic of North Macedonia”.
* they continue their propaganda making irridentist claims against the Hellenic history and culture, as well as historical distortions with reference to claims of heritage to Ancient Macedonia. Their constitution clearly states that they have no Hellenic origins what so ever and no connection with the Ancient Macedonia or Alexander the Great and his Hellenistic Empire.
* they refer to their language as plain “Macedonian”, without the descriptor of “South Slavic”.
* their continued use of the ancient Symbol of Vergina, which is a registered Coat of Arms of the Hellenic Republic, also acknowledged by the World Intellectual Property Organisation (of which Australia is a member). This symbol is an eight, twelve or sixteen-pointed solar pictogram, found on Ancient Macedonian archaeological sites.
* goods that have imported to Australia have “Macedonia” as the country of manufacture and not “Severna Makedonija or North Macedonia”.

We call on our Australian Government to be vigilant, through the Department of Foreign Affairs and Trade, to direct all departments and organisations to respect the provisions of the Prespes Treaty and not act in defiance of it.

We urge our Australian Government to openly condemn any such irridentist actions and territorial claims, as they create social disharmony, unrest, and provocation to Australian-Greeks, who have always observed racial tolerance and cultural co-existence and respect.

Finally, we implore our Australian Government to recognise the rights of Macedonians of Hellenic heritage and ancestry (just over 2.8 million living in the Greek Province of Macedonia; and over 260,000 living in Australia), our history and culture as Macedonians of Greek ancestry and culture, separate to the ethnic Macedoslavic, Albanian, Roma and Vlach population of the newly established country, designated and constitutionally accepted by its people, as well as the UN, EU and NATO as Severna Makedonija (North Macedonia).

Evan Kakoulas is the National President of the AHC