Olympics: Sakkari and Tsitsipas aim for gold in the mixed doubles 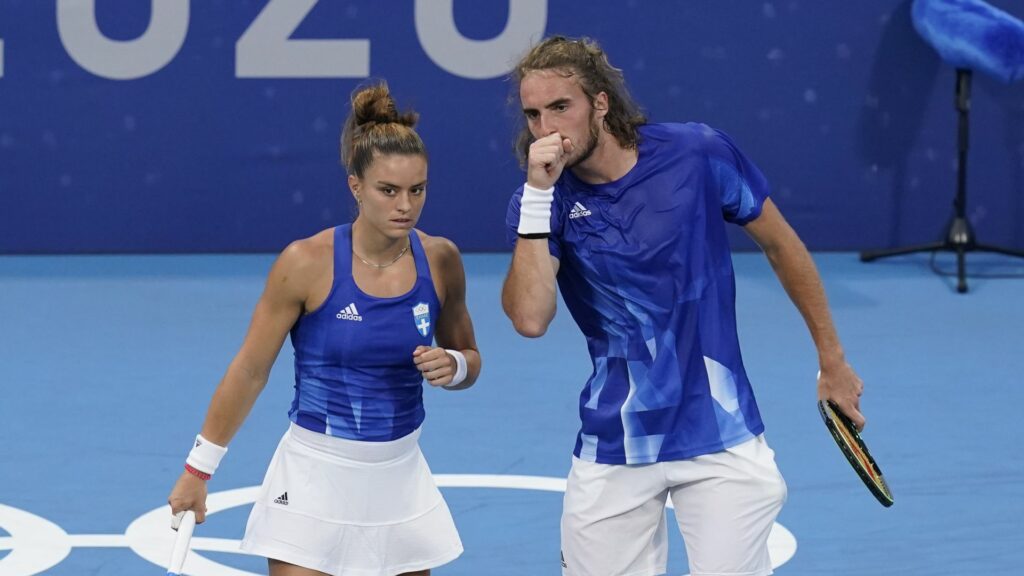 Maria Sakkari and Stefanos Tsitsipas, of Greece, speak during a first round mixed doubles tennis match against Gabriela Dabrowski and Felix Auger-Aliassime, of Canada at the 2020 Summer Olympics Photo: AAP via AP Photo/Patrick Semansky

There’s a slight feeling of déjà vu watching Greece’s top tennis stars Maria Sakkari and Stefanos Tsitsipas return to the court as they reprise their 2019 Hopman Cup partnership, this time, on the Olympic court.

“We’ve played with each other two and a half years ago and did really well, and now we are both better players. For sure we will try our best to get as far as we can for our country,” Sakkari told the International Tennis Federation.

The duo were knocked out of their respective singles events, and are now aiming to clinch the gold in the mixed doubles.

READ MORE: Olympics: Australian rowers put the ‘gold’ in the green and gold

Humbert hit 24 baseline winners compared to the third seed’s eight, however it may have been Tsitsipas’ injury that really let him down during the Frenchman’s set point.

Sakkari also fought through three sets, but was unable to overcome Ukraine’s Elina Svitolina on Tuesday.

This was the 26-year-old’s longest Olympic match to date, ending after two hours and 38 minutes.

Sakkari clinched the first set 7-5, in a battle that was challenging for both players, however the Ukrainian came out with a swifter game, winning the final two sets 6-3, 6-4.

Thankfully for Greece’s young tennis stars, they still have a chance to score some gold in the mixed doubles.

“It’s something we both really want, and it’s a dream come true for both of us being here, in singles and in mixed,” said Sakkari.

The Olympic mixed doubles move exceptionally quickly as a tournament, with only three matches standing between the 16 teams and a medal.

Sakkari believes that she and Tsitsipas can really apply the pressure on their opponents with their cohesive playing styles.

“It’s not so relaxed, because we both want to win! We have a great chemistry on court, and I think our games also fit well to each other,” Sakkari said.

“But the fact that we have a good chemistry on court is the most important thing. We can really do some damage here, so we’re going to try our best.”

Don’t miss out on the ultimate tennis event for all Greek-Australians, as Sakkari and Tsitsipas face off with team Australia’s Ash Barty and John Peers.