Greek firefighters battle to bring 118 blazes under control, including at Ancient Olympia and Evia 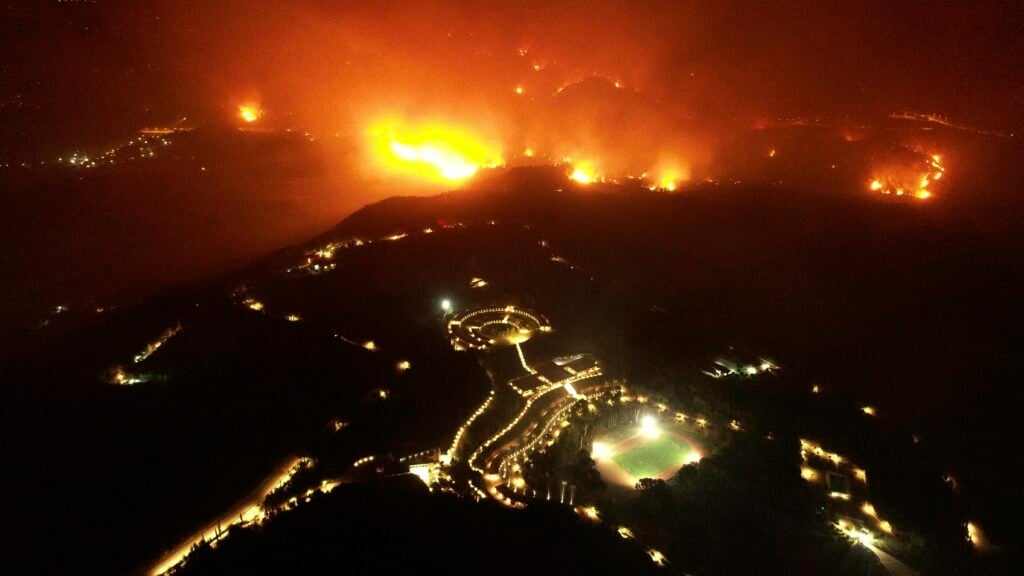 Greece’s Fire Brigade attended to some 118 fires across the country in the last 24 hours.

Greece’s Civil Protection and Crisis Management Minister Nikos Hardalias provided updates to the public on the numerous fires unfolding in Greece at a live briefing on Wednesday evening.

In the region of Ilia, Peloponnese, there are four fires currently raging around the area, near the ancient site of Ancient Olympia. The fire front in the nearby area of Iraklia is spreading fast and firefighting forces are struggling to prevent the 1km-long front from spreading beyond Pelopio village.

The fire is currently dangerously close to the original site of the Olympic Games, which has been evacuated for precautionary reasons, while Greece’s Civil Protection Minister Michalis Chryssochoidis and Greece’s Culture Minister Lina Mendoni attended the area to survey the damage on Wednesday afternoon.

Ms Mendoni said that all can be done to protect the museum of Ancient Olympia and the archaeological site from the raging fires is being done. She said efforts are fully coordinated in the zones around the antiquities.

The community of Miraka was evacuated, and the Vice-Governor of the Ilia Region, Vassilis Giannopoulos, told the Athens Macedonian News Agency that the situation was “very difficult”.

In the front near Ancient Olympia, near Iraklia, there are some 95 firefighters with 31 fire engines battling to bring the blaze under control, assisted by four ground teams, while overhead four aircraft and two helicopters are working to put out the fire.

In Messinia, a fire broke out in the area of Vlachopoulo, but quickly split into two separate fronts. Another fire broke out at Meligalas which is burning through the mountainous region between the villages of Kato Melpa and Vrachos where residential areas are located. More evacuations are expected to take place.

Traffic has been banned on the Tripoli-Pyrgos national highway.

The fire in Mirtia, northern Evia, has been burning since Tuesday evening, while residents in the small communities of Kalamoudi, Paliochori and Damnia have been evacuated. A blaze is currently raging in between the mountainous villages in the region. In Rovies, northwestern Evia, a fire is burning out of control with flames ripping through the town towards the beach.

Residents and tourists were evacuated.

Varybombi, north of Attica, has suffered from a devastating blaze which burnt through housing communities and forest areas. Nearly 6,000 homes were reported without power after a substation in the area was destroyed.

Mr Hardalias noted two factors that helped authorities this time. The activation of the European Emergency Number 112 worked well in alerting residents to fires and evacuations smoothly and efficiently.

In addition, the Civil Protection’s ‘Dryades’ plan, put into effect in June in 18 high-risk areas of Attica region for fire, resulted in the clearing and removal of flammable material, and in the maintenance of access roads for firefighters, particularly the rough terrain teams.

Greece also called on the EU’s RescEU program for help, which Cyprus and Sweden provided.

A statement by the National Observatory of Athens’ Centre, Beyond, said that the fire burnt more than 50 per cent of the land surface usually destroyed in an entire fire season.

So far this year, the burned land surface totals nearly 12,400 hectares (124,000 stremmata), if one includes the large fires of May through July (Egio, Samos, Stira on Evia, Kefalonia, and Schinos in Corinth).

The Beyond team said it would map in detail the burned land, after analysing the high-resolution images provided by the European Sentinel satellite.