For the love of books: The last Greek bookshop in Melbourne 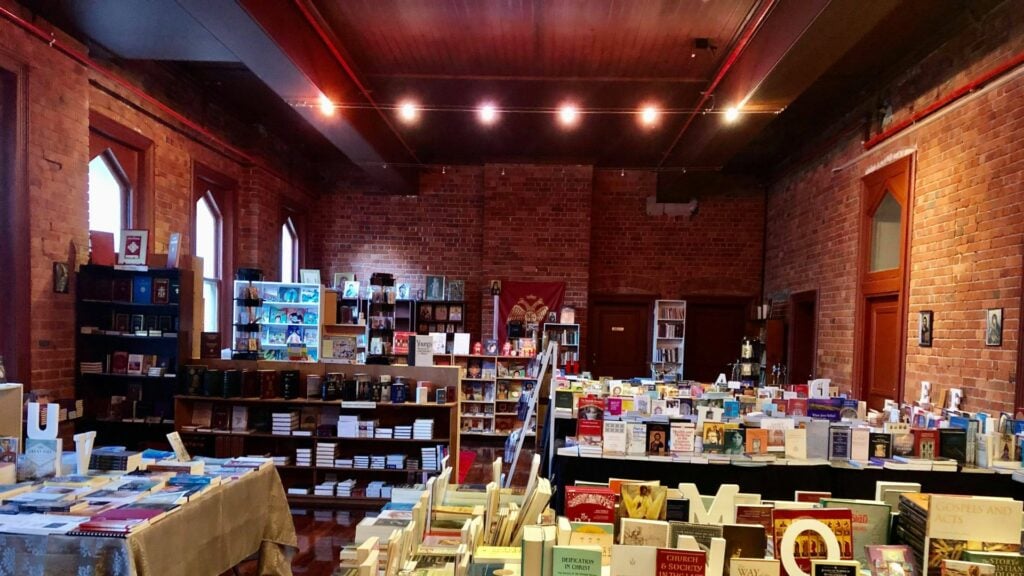 Books are revered in our traditional culture. Our entire way of life for the past two millenia has been based upon the teachings contained in a tome which is called in Greek “the Book” (ἡ Βίβλος). The act of reading is central to worship in that culture, as can be evidenced by the central position afforded to the reading of sections of the Bible (ἀνάγνωσμα) at key moments in the Orthodox liturgy, in which the congregation is enjoined to “attend in wisdom.” Within the Book itself, injunctions to study writings abound. John 5:39 for example begins: “Study the scriptures.” In the Pauline epistle to Timothy, there is the instruction to devote oneself “to the public reading of Scripture,” something that should not come as a surprise in a religion which sees the world, according to the Gospel of John, as based on words and worships God as one: “In the beginning was the Word, and the Word was with God, and the Word was God.”

Recently canonised St Paisius considered the act of reading to convey health benefits, at least spiritually, advising: “Read… even one or two lines a day. They are very strengthening vitamins for the soul.” Such advice can only be understood within the context of a precedent set by “Teacher of the Nation” St Kosmas the Aetolian, whose ministry was based upon him enjoining his flock to learn how to read and write as a prerequisite for the development of the appropriate moral compass that would facilitate the re-genesis of a modern nation (“Why, my child, do you not know how to read?”), even going so far as to claim that places in which reading is taught, schools, are more important to a country than rivers or springs.

READ MORE: The Taste of Freedom – Melbourne’s Pammesinians celebrate 1821 with a showcase of Peloponnesian food, wine and philotimo!

I remember as a child visiting the homes of elderly Greek migrants who apart from their carefully shelved old schoolbooks, retained stacks of mouldy newspapers in their backyards or garages. When I asked them why they didn’t throw them away, I would invariably be given the same response: to contemplate their disposal was inconceivable. The printed word was holy.

Back then and until recently, there were a number of Greek bookshops available to the Greeks of Melbourne. Once a year, as a treat, my father would take me on a pilgrimage to the Greek bookshop in Richmond, where I was permitted to pick a book for myself. Later, we would make the hike to Mylonas Bookshop in Brunswick, or to the marvellous pirates’ cache of printed booty that was Tsonis booksellers, the late Theodore Tsonis taking books to the masses literally, by visiting them in their homes. Travelling around Melbourne in Tsonis’ book van was a profoundly moving experience. As we drove, Theodore Tsonis would expound his theories on the importance of the development of a local Greek-Australian book culture to the perpetuation of our community as a distinct entity and expended thousands of hours and kilometres in its furtherance. Fast forward twenty years and the demise of Greek bookstores in Melbourne, which in the hubristic height of the nineties and in complete ignorance of the ultimate fate of its book repository was re-named by us “New Alexandria,” along with the unlikely prospect of their resuscitation was considered a prospect sufficiently improbable as to provide the foundation last year upon which Neos Kosmos could construct its customary April Fool’s Joke. On April 1st, it published a story announcing the opening of a new Greek bookshop in Melbourne. A poignant, though heart-rending joke if there ever was one.

The word “Fool” is an apt one. As he in his unassuming but persistent manner, compelled municipal libraries to purchase and stock the books of local Greek-Australian authors and traversed the highways and byways of our increasingly congested city in order to provide isolated old ladies with religious books, Theodore Tsonis would comment: “So many people say: “Why are you doing this? You are a fool, to go out of your way.” But we fool ourselves if we think we can survive as a people without books. For the sake of ensuring that every Greek household in Melbourne has books, I am more than happy to be called a fool.”

It was this word Fool, that echoed in my head, as I attended Theodore Tsonis’ funeral at his beloved Northcote Monastery. Sixteen years later, it is fitting but perhaps not coincidental, that the last Greek bookshop in Melbourne is housed on the very grounds of the Monastery in which we bid our final farewells to that late lamented bibliophile.

For Northcote Monastery houses the Melbourne branch of the Greek Orthodox Archdiocese’s bookshop, the last bastion for the purveying of Greek publications in Melbourne. It is centrally located, within the idyllic grounds of what is perhaps one of our most iconic community edifices, Axion Esti monastery.

READ MORE: Lexikopoleio: An Athenian bookstore specialising in dictionaries of all kinds

Beautifully set out within large, well-appointed rooms whose exquisite red brick architecture exude an otherworldly feel, a cross between an English university library and a Byzantine scriptorium, it is a treasure trove of knowledge and piety, stocking bools on diverse subjects such as art, literature and beyond, in many languages, including Russian, Serbian, Arabic and English. While the main focus of the selection is religious, one can find numerous hard to find publications on an almost limitless gamut of topics, including to my absolute delight when last I visited, precious editions of the work of Art historian, Andre Grabar, the stories of Alexandros Papadiamantis and much more remarkable literature besides.

Most importantly, the bookstore stocks the works of local scholars and writers. Our organised community functions mostly centred upon the performative or the social and we tend, to our detriment, to neglect the fact that within Australia, local academics are making significant contributions to fields of study pertaining to key aspects of our culture and identity. Many of these works are ground-breaking and yet without the bookshop making these available to the general public, they would be largely unknown and their impact, decidedly muted. Works such as Basilios Psilacos’ recently published Byzantine Ecclesiastical Music: Chanting in the Eastern Orthodox Tradition, on the other hand, mediate an age-old ecclesiastical heritage through a uniquely Australian lens, providing a cogent framework for the continued relevance and perpetuation of such elements within the antipodean context. Being singularly poised as no other institution to contribute in such a meaningful way to the intellectual diversity of our community and broader Australian society, the bookshop is thus a powerful symbol of multiculturalism and offers us, in the absence of any other providers a much-needed intellectual infusion.

As befits a Greek Orthodox bookshop, it also stocks a comprehensive array of Bibles, liturgical books, lives of saints, books dealing with ethical questions and the modern world in both Greek and English, which prove perennial favourites in many families. It also houses a broad selection of icons, crosses and religious implements, in all of the multifarious diachronic styles that comprise our traditional aesthetic. While it is possible for the visitor to spend hours browsing in the jewel-like, cozy bookshop, dissolving one’s cares in its welcoming, serene, contemplative atmosphere, perhaps the most vital of its elements is its extensive children’s
section that is eminently user friendly. Few of our community institutions go out of their way to cater for children in such a targeted fashion and to address their needs. The exhaustive selection of accessible stories and activity books available in Greek and English have been specifically written in order to impart aspects of ethics, faith and culture to a younger, and largely although not exclusively English-speaking readership. Considering that of late there appears to be a spontaneous grass-root movement from within our community towards encapsulating our values, however these are defined, within the medium of children’s books, it becomes evident that the Northcote bookstore has placed itself as a driving force behind such endeavours.

The other day I asked my children which would be the first place they would like to go after lockdown. The Northcote Bookshop was their universal response.

An Aladdin’s cave of all things spiritual, literary and besides, this last fortress of Greek literary culture is a must visit. In the meantime, most of the items it stocks are available online and offer perfect solace and company in this time of solitude.