The Taste of Freedom – Melbourne’s Pammesinians celebrate 1821 with a showcase of Peloponnesian food, wine and philotimo! 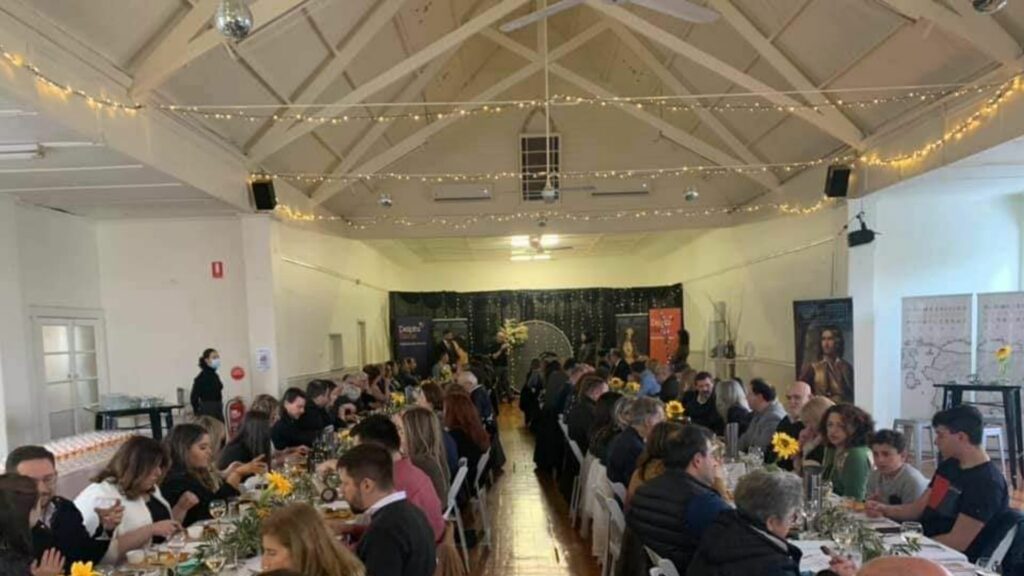 We all know that food, drink and hospitality are an essential element of Hellenic culture.

History tells us that this is as much a facet of Greek life today as it was in the past. And this was as true in 1821 as today. We know that many of the philhellenes who flocked to Greece to support the revolution fell in love with Greece, including its food and wine. One of these was the Scotsman George Finley who fought at Messolonghi and at sea in the Greek cause, who so loved all things Greek that he stayed on after the revolution to help the new government, enjoying its lifestyle until the end of his life.

So how appropriate that Melbourne’s own Pammesinian Brotherhood Papaflessas should put together this amazing event, showcasing the food and wines of Greece, focusing on the Peloponnese – the region that began the revolution and throughout which many of its major battles were fought on the long road to freedom. The event was sponsored by Delphi Bank.

MC’s for the afternoon were Papaflessas’ Mary Tsaganis, ably assisted by her daughter Taksia. The afternoon began with a blessing by Father Vasilopoulos and an address by our own Consul General Emmanouil Kakavelakis.

The spacious church hall was elegantly decorated, with two long tables, topped with white table cloths and decorated by olive branch centre pieces. The event followed the format of a formal degustation, with wines selected to match each specially chosen dish. Dishes were chosen to showcase various aspects of Peloponnesian cuisine, with dishes featuring slices of citrus fruit as both an accompaniment and decoration as well as in recognition of the regions fame as a producer of oranges and lemons.

The selection of delights was curated by own own Hellenic foodie and author Meni Valle and renowned wine specialist Argyris Karavis, with Melbourne’s famed Meraklis Catering producing each dish and serving the wines. This is the first time in Melbourne that such a menu has been created. Each course was accompanied by a presentation by Argyris, explaining each dish and the accompanying wine selection.

READ MORE: The Joys of Greek Food &#8211; With Elizabeth David on her wartime culinary journey across Greece

Mr Karavis’ talks were a privilege to hear. His knowledge of Greek wines, their history and reputation across the world was inspiring and an encouragement to all to learn and taste. He explained the history of Greek wine, stretching back to ancient times, the wide variety of wine types and the nearly 200 wineries of Greece, with fine Greek wines being well respected across Europe and the US.

Diners were also privileged to listen to Meni Valle, in conversation with Mr Karavis, as she explained her interest in food and cooking. It was particularly endearing to hear that her inspiration came – as it is for most of us – by watching and listening to her mother as she cooked in the kitchen. She has dedicated herself to recording and sharing the Greek food that she loves. Her latest publication – the food of Ikaria, the Greek Island noted for its diet and the longevity of its inhabitants – was on display during the evening, with many diners taking the opportunity to purchase a copy.

With two such experts, we all learned something from the event, enriching our experience of all things Hellenic. My own personal favourite was Argyris’ choice of Gaia Notios White wine for the first course. As he explained, this wine combined the best of Gaia’s Peloponnesian grape varieties. Crisp and clean, it was an excellent balance for the strength of the cheese and sausage dish that it complemented.

As befits such an impressive cultural event, it also attracted a number of other authors no doubt drawn by their interest in all things Hellenic and eager to experience Greek culture from afar. These included Roland Perry (author of “Horrie the Dog”), Kathryn Gauci (author of “The Embroiderer”), Dina Gerolymou (author of “The Battle of Crete: The Untold Stories”) and Karen Martin whose new novel – “Dancing the Labyrinth” – inspired by her many trips to Crete and her love of its Island lore, has recently been published in English and Greek, available to order from Sydney’s Bilingual Bookshop.

It was my pleasure to be invited to give a short address, in which I alluded to the love of Greek cuisine and refreshment by the Anzacs who came to Greece across both world wars. I made special mention of the wine and cake offered by the locals of Kalamata to the retreating Allied soldiers as the mainland campaign drew to a close in April 1941 as well as to Horsham’s Private Syd Grant. After the war Syd would come to Melbourne to obtain the Kalamata olives he had tasted while in Messinia in 1941. The Anzac link to Greece is enriched by such experiences.
The event concluded with a warm thank you from Papaflessas’ President, Steve Gotsis, thanking all for coming together for this special experience of some of Greece’s great gifts to the world, a real legacy of the Greek revolution.

Needless to say, many were reluctant to finish the evening, continuing to savour the fine wines and hospitality of the event for that little bit longer. As I surveyed the happy and sated throng, I could only think of the appeal of the Classical Greek poet – and lover of wine – Anacreon who wrote that we should “all the laws of wine obey”. He would have been very pleased with Papaflessas’ initiative.

READ MORE: Events galore: Your guide to the 200-year celebration of Greece&#8217;s War of Independence 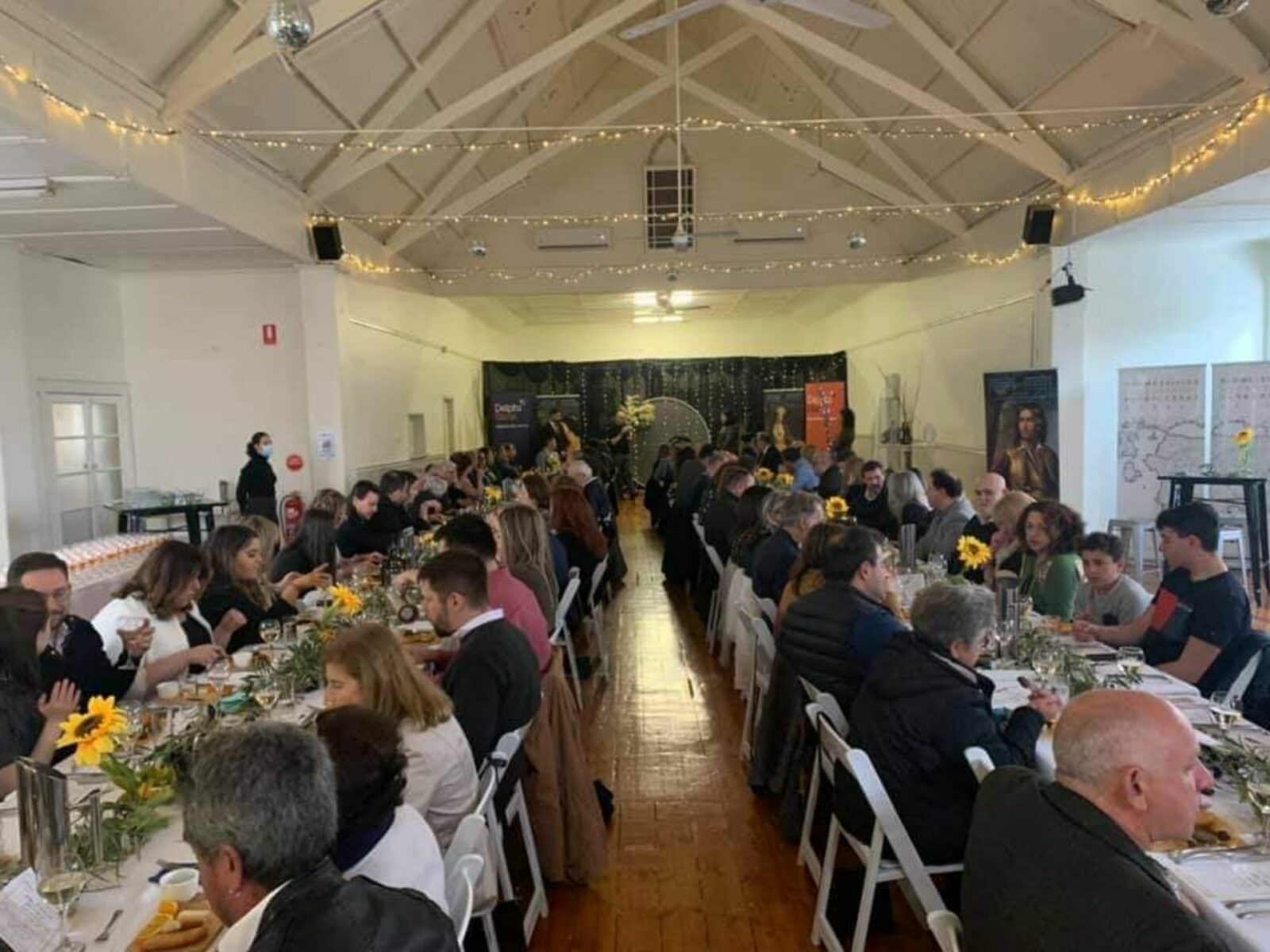 In my opinion – and that of many other attendees – the afternoon was one of the best to date of the whole range of 1821 commemorative events organized throughout this year of celebrations. Credit should go to all at the Pammesinian Brotherhood Papaflessas for choosing such an innovative and creative way to celebrate 1821, showcasing Hellenic food, wine and philotimo. Congratulations to Meni Valle, Argyris Karavis and Meraklis Catering for their excellent work in putting together such a unique and inspiring combination of food and wine. I hope that this event becomes an annual one and an institution in Melbourne’s Hellenic calendar. Finally, I can only raise a glass of fine Gaia Notios wine and shout Yassas!

Jim Claven is a trained historian, freelance writer and published author. He has not only written many articles and made many presentations on the Hellenic link to Australia’s Anzac tradition but also articles on various aspects of Hellenic culture, including one for Neos Kosmos on English food writer and cook Elizabeth David and her role in popularizing Greek food after WW2. His new book – Grecian Adventure: Anzac Trail Stories & Photographs, Greece 1941 – will be released soon. He can be contacted at jimclaven@yahoo.com.au.