This book is written in English and Greek, and illustrated so it can be read and understood, by children of Greek and non-Greek origin 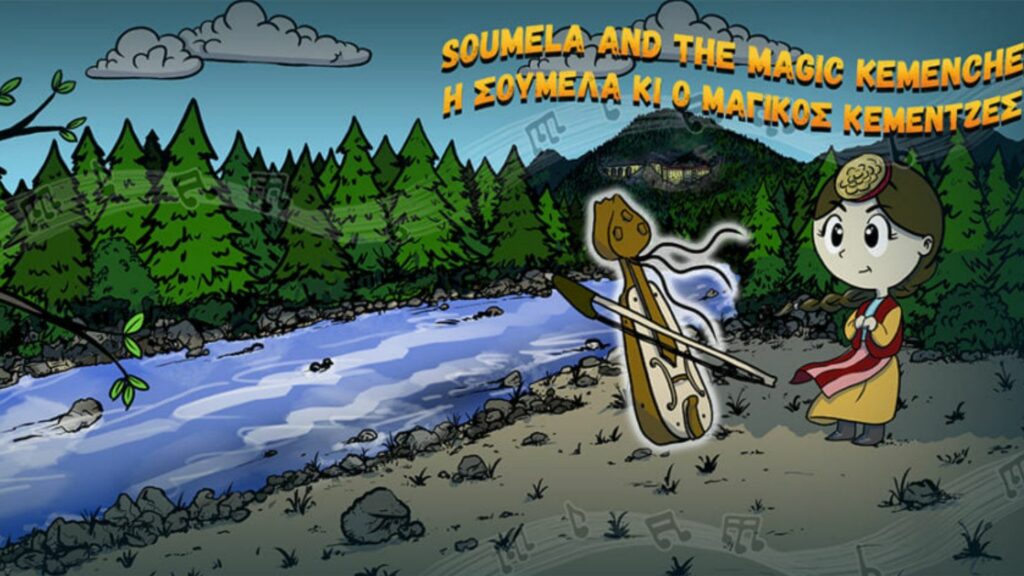 Writer and lawyer Konstantinos Kalymnios’ bilingual book Soumela and the magic kemenche has been published and is ready to take children and their parents on a journey back in time.

Mr Kalymnios dedicated the book to his daughter Helene (who also has her artwork shared in the book), for “inspiring the writing of this book and to all mulberry stained children all over the world”.

The story begins with a little girl names Soumela, whose family lived on the slopes of Mount Mela in Trabzon, where the Monastery of Panagia Soumela was founded in 386 AD.

“In the very old days, before the stories that are being told now were made, there was a little girl. She lived with her mother in a small stone house, near a stream, at the foot of a huge mountain that was as high as the sky. This mountain was covered by a dense forest, so green that it looked like a carpet of soft moss, like the ones huddling on the rocks around the little girl’s house. The little girl wanted to walk over the tree tops and climb the mountain in the same way she stepped on the moss, because on a cliff, in the middle of the hillside, there was the bright white monastery, which emerged from the foliage of the trees of the forest.”

While the story primarily follows little Soumela, and her journey overcoming adversity to be safely reunited with her mother, Mr Kalymnios also gives information about the first presence of Greeks in Pontus, the establishment of colonies in Sinope, Amisos and Trabzon, and the creation of many other colonies across Asia Minor.

He also doesn’t shy away from delving into the wars between Greece and the Ottoman Empire from 1912 to 1923, and the genocide of 350,000 Greeks of Pontus.

Mr Kalymnios’ words are accompanied by illustrations designed by Stefanos Eleftheriadis. The book cover features imagery of a Pontian lyre, a young girl dressed in a Pontian costume, and the Monastery of Panagia Soumela in the background.

You can purchase your own copy of Soumela and the magic kemenche by visiting www.greekorthodoxbookshop.com.au