Students at the Greek Orthodox Community of Dandenong and Districts Greek School at a Zoom session with their fellow students of Moudros Junior School in Lemnos earlier this year. Photo: Supplied

To mark its tenth anniversary this year, Melbourne’s Lemnos Gallipoli Commemorative Committee established a new school competition bringing together students in Greece with those in Australia to celebrate this year’s bicentenary of the 1821 Greek Revolution. The Committee was keen to make this a celebration which engaged with our youth, the next generation.

This special competition was made possible due to the establishment of the Lemnos Gallipoli Commemorative Committee’s Sister School Program, during the centenary of the Armistice of

Mudros celebrations held on Lemnos in 2018.

“Our committee has always been keen to engage with young people, to build awareness of the Hellenic link to Anzac through the Lemnos Gallipoli story, and the wider connections between Australia and Greece”, committee vice-president Christina Despoteris said.

She explained that the Sister School Program currently connects two schools on Lemnos with schools in Melbourne. These are Albert Park College with Moudros Senior High School and the Greek Orthodox Community of Dandenong and Districts Greek School with Moudros Junior High School. Over the past few years, these schools have been holding joint Zoom sessions, focusing on a cross-cultural exchange between Australian and Greek students through language and the historical connection between the two countries and peoples. Ms Despoteris coordinates the program on behalf of the committee.

To help celebrate this year’s bicentenary, a special essay, poetry and art competition was organsed between the students from the Greek Orthodox Community of Dandenong and Districts Greek School and the Moudros Junior High School. The competition was open to all their students who had participated in the Sister School Program at the schools in 2020 and 2021.

The theme of the competition was “Greece 1821 – 2021 Celebrating 200 years of Independence”. Students were encouraged to investigate specific themes including “Heroes of the Revolution”, “Women of the Revolution”, H”ow has the Revolution affected Life in Modern Greece”, “Historical Markers that shaped Greek Society 1821 – 2021”, “The Influence of Hellenic Civilization on the World”, “How Hellenic Civilization has influenced Australia”, “The Greek Australian Connection”.

will be announced at a later stage” Ms Despoteris said.

Ms Despoteris said that the judges were very impressed at the standard of the entries.

“The essays and poems conveyed a sense of insight into the topic, articulating thoughts and arguments succinctly and clearly. The art works which were submitted were of a high standard. They stood out for their creativity and originality of the theme, as well as the artistic composition and overall design”, she said. "The Heroes" by Theodora Panaki (Year 8) 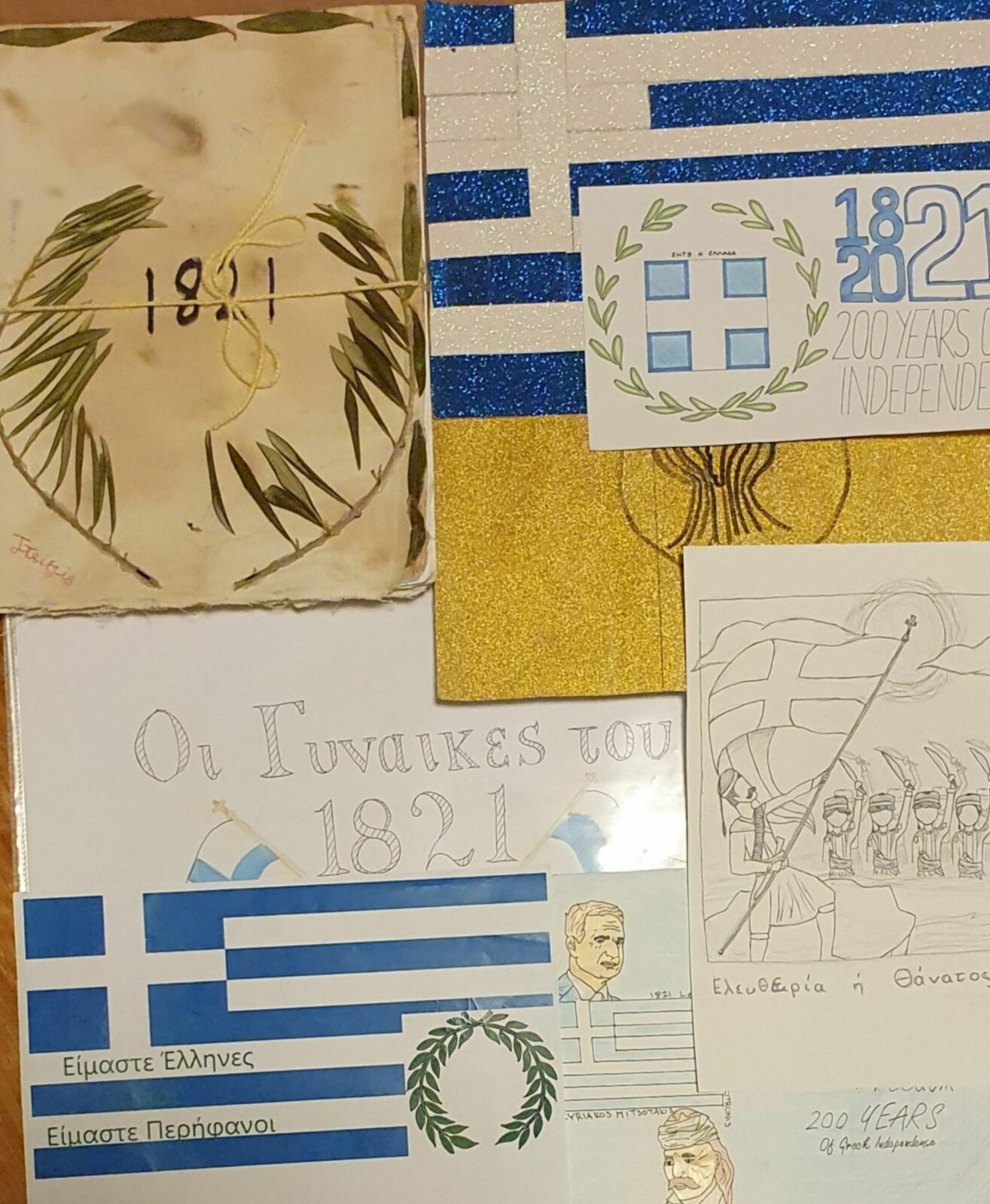 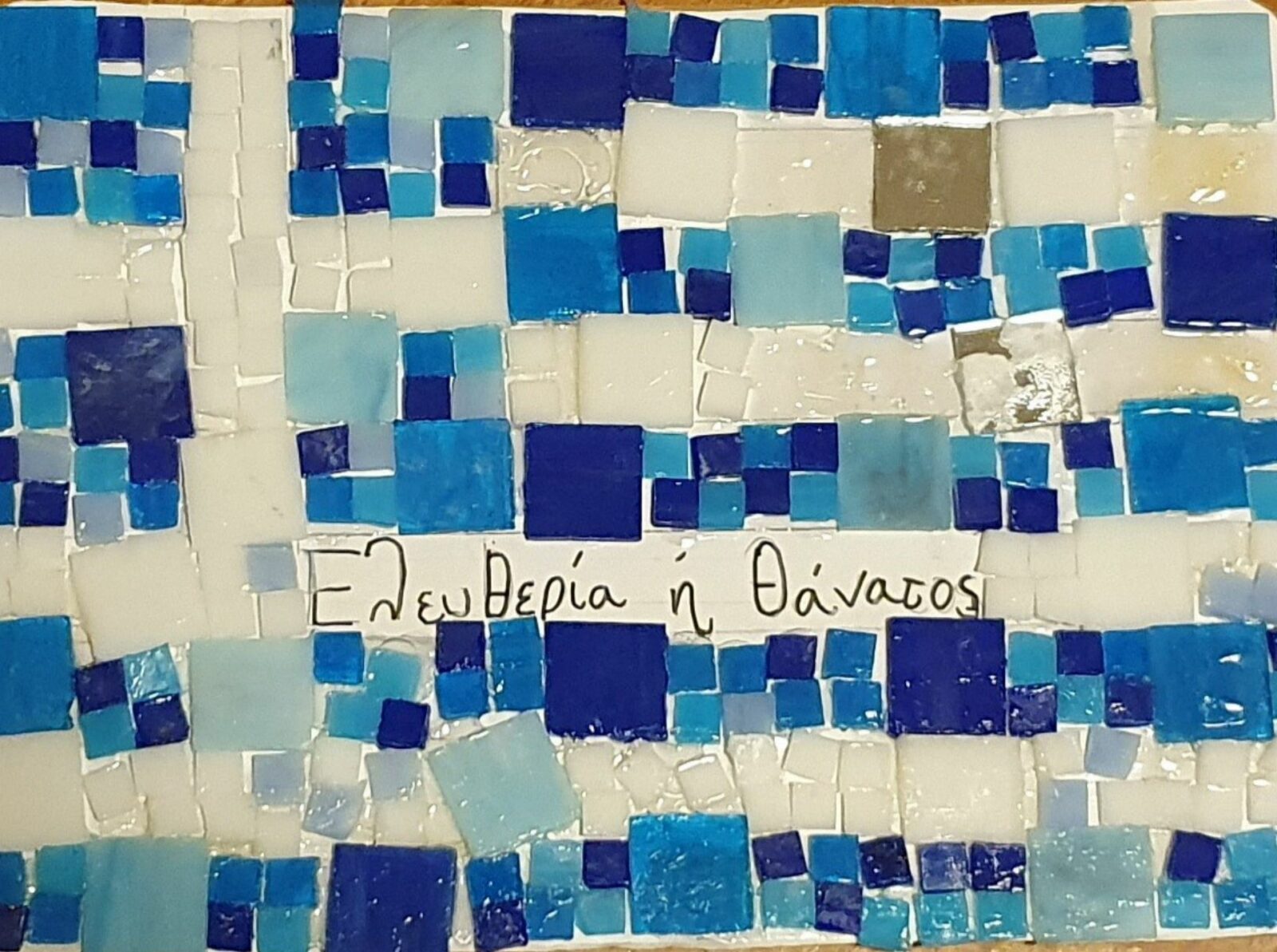 From Dandenong School the winners were:
Nektaria Antonopoulou, a Year-12 student impressed the judges with her essay entitled “Events which influenced me as a Hellene”.

Regas Laoutidis, a Year-11 student wrote about “The heroes of the revolution”.

Stella Ploudia, a student in the composite class of Year 9-10, wrote a poem entitled “Freedom or death”.

From Moudros School, the winners were:
Konstantinos Pinakis, a Year-7 student who wrote the very emotive poem “The War”.

Sotirios Tellios impressed the judges with his sculpture of “Odysseas Androutsos”. Sotiris is in Year 7.

A Year-8 student, Elpida Velve, wrote about “The Women of the Greek Revolution”.

Irini Tarsi, a Year 8 student, wrote a poem expressing her gratitude and to honour “Those” who fought for freedom.

The judges could not pick between the Year-8 students Evangelia Deligeorgi’s and Alexandra Tsiotasi’s essays “The chronicles of the revolution” and “The significance of the revolution”, respectively, so they awarded prizes to both students.

Year-8 student Theodora Panaki won with her pencil sketch of “The heroes”.

The winner of each category and level will receive as a prize from the Lemnos Gallipoli Commemorative Committee a copy of Jim Claven’s “Lemnos & Gallipoli Revealed – A Pictorial History of the Anzacs in the Aegean, 1915-16”.

In announcing the winners, Ms Despoteris said “As the Coordinator of the competition and the sister school program, I was delighted with the response, as well as with the standard of the entries we received. These types of activities keep alive the historical memory, help cultivate the Greek language and further motivate and inspire students to feel proud of their Hellenic heritage”.

We all hope that the time will come when the Lemnian school visits Melbourne and when the students from Dandenong will be able to travel to Greece to cement the relationship that they have developed over the last few years.