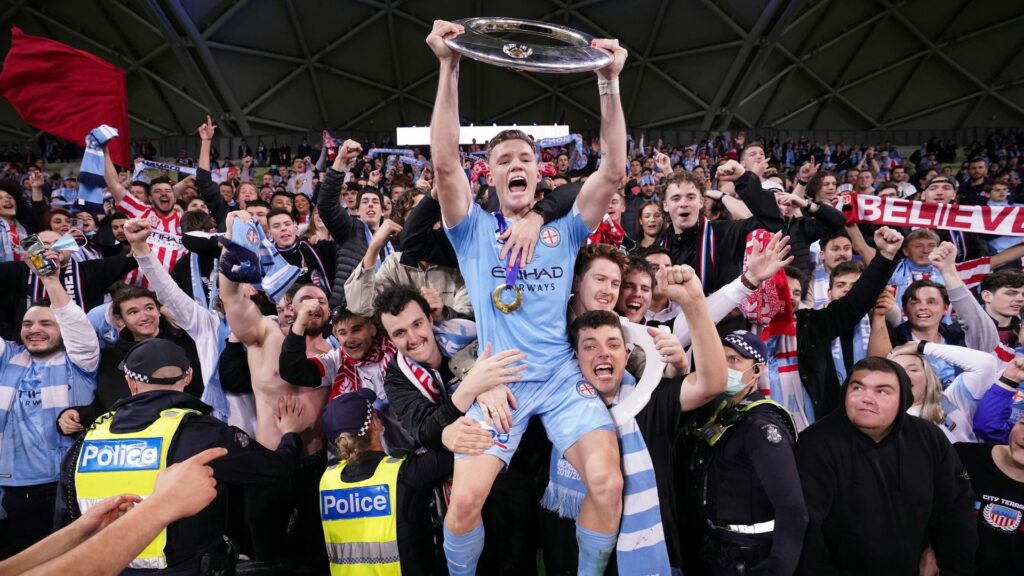 There are still questions as to how football will look after vaccine targets are reached Photo: AAP via Scott Barbour

It is still unclear when sports fans will have the ability to watch their favourite teams play at full capacity stadiums in Victoria, with no clear indication in the Premier’s roadmap.

New South Wales has been promised spectators will be able to start filling seats when the state hits 70 per cent double dose vaccinations.

The new A-League men’s season kicks off on 19 November, followed by the women’s on 3 December, and with the upcoming Women’s World Cup, all eyes are on state and federal governments to provide more information.

Prime Minister Scott Morrison noted in early August that state governments would be responsible for enacting restrictions on stadium entry.

“If venues and things like this want to do that, my advice is then they will need the backing of state public health orders to achieve that, to make those sort of things mandatory.”

As vaccine mandate conversations continue to take place, pertaining to whether or not fans and those working at sporting venues will have to be vaccinated, and how that may be checked, Football Australia has launched their own #VaxxedToBeBack initiative.

READ MORE: Australia’s football leagues rebranded and united under one name ahead of the new A-League season

The initiative is has been undertaken by all nine Member Federations across the nation, with the objective to “encourage members of Australia’s broad football community to share the reasons why they’ve been vaccinated”.

The launch video features star Aussie football players Sam Kerr and Alanna Kennedy, former Socceroo Joel Griffiths and elite referee Kate Jacewicz to name a few, explaining why they felt it was important to get to COVID vaccine.

CEO of Football Australia James Johnson welcomed the initiative, hoping it will bring all Australian football fans and players together from across the globe.

“The safety and wellbeing of the Australian football community is paramount to Football Australia. The strength of our game lies within our diverse and broad community and to see so many come together behind this worthy cause, to reconnect with loved ones and the game we all love so dearly is heartwarming and pleasing to see,” he said in Football Australia’s statement.

Football Australia has not made the decision to make vaccinations compulsory for staff and players under their governance.

“While Football Australia respects and acknowledges that vaccination is an individual decision, the organisation supports Federal, State, and Territory Government advice that mass vaccinations is Australia’s pathway out of COVID-19,” they said in their statement.

At the NPL level, clubs and associations have not foreseen any issues with the possibility of a vaccine mandate that will allow players and staff to make it into local stadiums.

Association of Australian Football Clubs (AAFC) Chairman Nick Galatas tells Neos Kosmos that clubs are more concerned with getting back out to play.

“AAFC has not been referred any concerns by its member clubs concerning the future of playing connected to any vaccine mandate. The clubs are keen to resume playing and ideally, with crowds, as soon as possible,” he said.

There is concern that there may be people who will not take too kindly to the entry rules of the future, but the AAFC is keeping an eye out for what that means for clubs and venues.

“AAFC is mindful of any potential for security and related cost escalation and imposition on the volunteers of its member clubs. We expect clubs will be able to monitor and comply with and requirement to not admit any unvaccinated person. AAFC does not have a view or policy separate to or distinct from govt requirements and official health advice,” Mr Galatas said.

CEO Sydney Olympic FC John Boulous told Neos Kosmos his own club will observe the relevant guidelines put in place by the government and governing bodies of football in Australia.

“We don’t see any issues as we envisage rules that are put in place for entry in stadiums will be consistent with many conditions encouraged in everyday life so people who are fully vaccinated may naturally receive more opportunity and flexibility,” he said.

“Our expectation will be in line with any public health orders and that of our governing bodies around participation in our relevant competitions”.

“We anticipate that as we compete in national competitions, players, coaches and officials wanting to participate freely may have to be vaccinated to do so and we are advising anyone that asks us of this position”.