One small step for motorsport, one giant leap for womankind: Krystina Emmanouilides on making motorsport more accessible for all 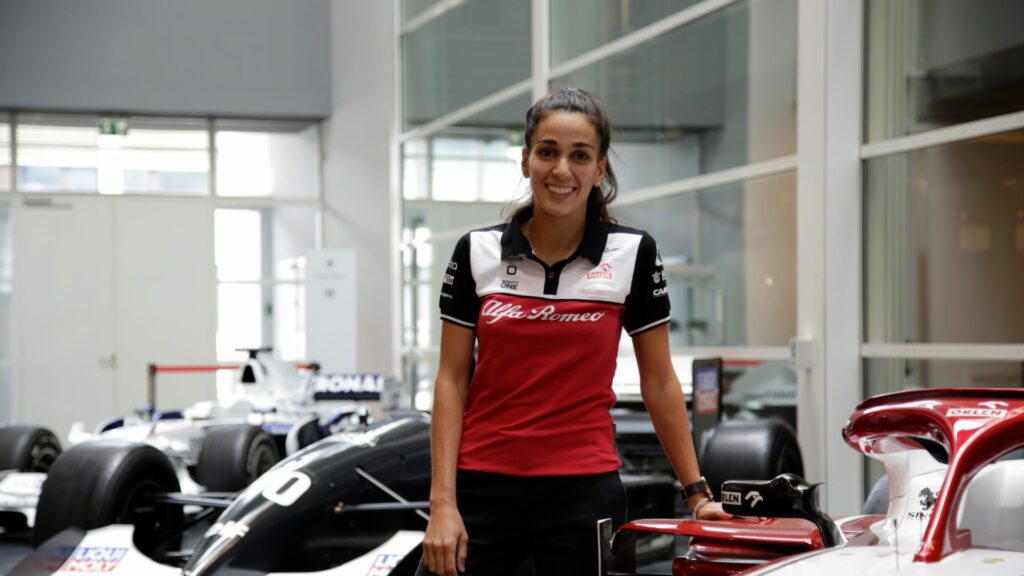 Krystina Emmanouilides wants to make sure the motorsport industry is more inviting and inclusive for all Photo: Supplied

From Melbourne’s outer city suburbs, to Oxford and now Zurich, Krystina Emmanouilides has been making her mark, taking steps to creating a more inclusive world.

Ms Emmanouilides is Computational Fluid Dynamics Development Engineer with the Alfa Romeo Racing ORLEN F1 Team and has been living in Zurich for the last three years.

“It’s always so disappointing when it’s 11th and 12th. It’s almost like when you finish fourth at the Olympics, there’s no medal but you were so close. But I think it was probably one of our better races in the wet, so we’re getting there,” Ms Emmanouilides told Neos Kosmos.

The 30-year-old engineer has made Switzerland her new home, after spending close to a decade studying and subsequently working in the United Kingdom. While it was challenging as an 18-year-old to travel halfway across the world to chase the dream of entering the world of motorsport, Ms Emmanouilides used her knowledge to overcome the fresh challenges of living as an expat.

“It’s strange because it’s difficult with the language but it’s so nice. It’s far similar to living in Melbourne than what it was when I was in London because there’s a lake here, the city is big but small,” she said.

“But it’s been easier. I think the whole language thing has just not even really been an issue because it’s been easier to live here with the quality of life. It’s just so much better now compared to the English weather.”

Ms Emmanouilides is much closer to her family’s origins these days, being just a hop, skip and jump from her father’s roots in Seres and Nigrita and her mother’s in Florina.

Design and hand on problem solving has always been in her blood, and although she didn’t fall in line to become part of her family’s group of architects, Ms Emmanouilides found her calling in machines, perhaps even fuelled further by her upbringing in Melbourne.

“Growing up in Melbourne, where there’s a race, even if you’re not going, you’re aware it’s happening. I think there were just a lot of aspects of my life that were around the track. I played soccer at the pitches at Albert Park. So the pit buildings during the year were our change rooms, I went to school around the track,” she said.

“My family aren’t really into cars, it’s not one of those stories where I grew up fixing cars. My family are all architects and coming from such a design background…you have that really large influence. So for a long time I thought maybe I want to do car design. But I was always more ‘LEGO’, building stuff, always super organised, just a very logical person. I was not overly creative like my family and it just always made sense to me that I would do engineering.”

Eventually all her efforts from studying motorsport engineering, working for motorsports suppliers and software companies landed her a role with the Alfa Romeo ORLEN F1 team. She was no longer on the outside, looking in, but now it was time to make some new strides.

Ms Emmanouilides has been making the case for creating a space for belonging in the motorsport industry, rather than forcing others to fit in from the time she entered studies. She was only one of five women in her course, and that number dwindled further in the industry.

“Even though I was kind of prepared for it given my studies, I really was quite shocked when I went into a team and saw how few technical staff there were who are women,” she explained.

“It’s really strange, I don’t know why, because like I said, even when I worked in the automotive company. It was pretty balanced in the engineering department, so to me it kind of says there’s something about motor sport as a culture, as an environment that just hasn’t adapted itself or its appearance to be more attractive for women to enter.”

While she was always aware of the lack of women in her field, it was still astounding to see how this spilled over in other facets of her day-to-day on the job and how even her mere presence could cultivate change.

“Recently we just got a new women’s bathroom in one of the buildings because there weren’t that many. They were only on the top floor and the bottom floor and so anyone in between had always taken the stairs and the men’s toilets were on every level and so it’s even just small things like that,” Ms Emmanouilides said.

Just being in the field is a step in the right direction to making motorsport more appealing and inviting to women, but Ms Emmanouilides wants to bring to light the social consequences of Formula 1 culture that often gets overlooked.

“I don’t know the reason why we have a two week shutdown, as in what the historical reason is. Obviously it’s a good opportunity to force everyone to take holiday, but two weeks of your holiday are prescribed at a certain time and if you have children and given society, most of the time even when you consider the gender pay gap, women are the primary carers of children. Then you have this environment in motor sport, where two of your whole two weeks of your holidays are dictated and you don’t have that flexibility, straight away that’s already a big barrier,” she said.

“I think as a sport, the governing bodies need to consider these social consequences to things like this and there’s just a lot of things just like that…I think it’s got a long way to go. There’s obviously a lot of headway being made now.”

In an effort to be part of that change, Ms Emmanouilides has been named a Racing Pride ambassador. The organisation promotes inclusivity in the motorsport industry and its technological and commercial partners, with a focus on promoting those part of the LGBTQ+ community.

Identifying as gay herself, Ms Emmanouilides hopes that her work as an ambassador can open up avenues and foster an environment that is open to learning.

“We look at hosting training sessions about diversity and exposing people to terminologies and maybe exposing people also to people within the community’s experiences. A lot of the time people don’t realise the bad experiences that people have and the result which causes people to feel uncomfortable and not to be out at work, not to be authentic at work. I think these types of programmes are really important because a lot of the time you know you do get questions at the end of the session and then a lot of people say ‘you really opened my eyes to these things’. I guess because they’re just not aware, but a lot of the time these things happen quietly,” she said.

By exposing fellow teammates to the challenges faced by those in the industry who don’t quite fit into the status quo, Ms Emmanouilides hopes that the face of motorsport will shift to include a range of people that young aspiring engineers, drivers and suppliers can identify with.

“When I was younger I used to see people sitting on the pit lane on TV and wanted to be them. And that’s the thing, a lot of the time it’s not until we see someone doing something that we think we can be them. This is why it’s really important to me. Not just to be here, but to try and make small changes where I can and make things better,” she said.

“The problem always starts from the younger generation. Why are there not enough girls who are involved in STEM in general? Are they deterred away from these subjects at school? Or are they maybe not even pushed or promoted to do these things and they’re still told in their households that it’s not something that young girls do?”

Looking to next year, 2022 seems to be symbolic for many as a new year of hope after dealing with the fallouts of the COVID-19 pandemic.

Next year’s F1 Racing calendar has just been released with Melbourne slated to host after a two year hiatus in early April. Ms Emmanouilides hopes the new will bring an opportunity to visit her old stomping grounds, and continue growing in her field.

“It would be really nice to work on a winning car. That would be something personal that would be a great achievement, but for me, it’s always about the small things, not just in work, but in trying to change the culture and the environment.”

Ahead of @alfaromeoracing Sauber's 500th GP, we're proud to present our latest Spotlight piece with Ambassador and #F1 engineer Krystina, in which she discusses her path to F1, #WeRaceAsOne and the future of #LGBTQ inclusivity in motorsport. #TurkishGP #racingpride #Sauber500 pic.twitter.com/iKkBbn2Hcb