Brains and brawn: Maria Alexiadis OAM is a powerhouse package 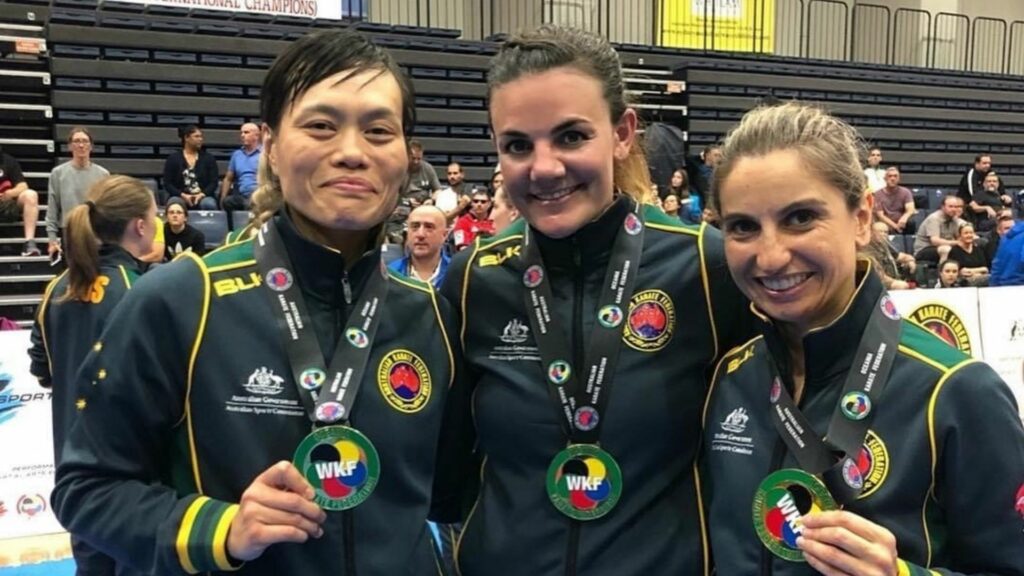 From L to R: Kristina Mah, Michelle Wilson and Maria Alexiadis. The oldest athletes on the Australian Karate Team. Here they represented Australia at the Oceania Championships and all won gold. Photo: Supplied

When Maria Alexiadis OAM first stepped foot into the dojo at the age of 12, she could have never imagined that it would take her across the world and score her an Order of Australia medal.

“I was never meant to start karate. My brother, sister, dad and I used to watch martial arts movies with Bruce Lee in them…My brother wanted to be Bruce Lee and there was a karate school up the road in the area,” she told Neos Kosmos.

“Dad took the three of us along to enrol my brother into karate and the instructor looked at my sister and I and asked ‘why don’t you start as well?’.”

Since then, Ms Alexiadis has won many accolades, including a gold medal at the 2019 Oceania Championships and in 2021 she made the Order of Australia honour roll for her service to karate.

“I was a lot more of a perfectionist when I was younger and would stick at something until I perfected it. At first, I thought getting to my black belt meant I would have perfected the martial art. I then discovered competition and being a high achiever, I just wanted to be the best…And then other challenges kept creeping in so my goal posts continued to change. I guess I never achieved everything there was, I just kept going with it,” Ms Alexiadis said.

The 45-year-old athlete has done it all; athlete, coach, coaching education coordinator, development coordinator and board member, but her talents extend beyond her athletic prowess.

Ms Alexiadis has an impressive day job as a medical research scientist, delving into granulosa cell tumours, a rare form of ovarian cancer.

“There are two forms; an adult and a juvenile form. It is rare and there aren’t many very many groups working on this particular type of cancer, but the team at The Hudson Institute of Medical Research led by Professor Peter Fuller and Dr Simon Chu are working on trying to find answers for women and girls who have this rare disease,” she said.

Ms Alexiadis’ outstanding CV means that she has been able to take her abilities from working within a highly professional team, to a sport that is still quite amateur here is Australia and often quite individualistic.

“In medical research I’m working within a team to find solutions to problems and answers to questions. There are procedures and processes we follow.  It’s all about communicating, analysing, experimenting and looking into different research and making sure that all points of views and opinions have been considered in problem solving.  It is a very supportive environment. These abilities are also important in all aspects of sport” she explained.

Ms Alexiadis has challenged the status quo at every stage of her sporting career, pushing the boundaries of a typically male dominated sport and organisation to make sure karate is accessible for all, no matter age, gender or circumstance.

“I wasn’t selected for a national team, around ten or 11 years ago because I was apparently too old and individuals thought I’d probably give it up in the next year anyway.  I’m not a fan of people putting limits on anybody – for any reason but particularly because of age.  I felt I needed to prove to ‘them’ that people at my age can still compete at a high level, be competitive and win medals” she said.

“So here I am in 2021, 11 years later and off to Olympic qualifiers. That’s pretty special and I hope that other people see that and are inspired by it.  The message here is don’t let anybody limit you because of their own beliefs or their own experiences.  Keep following your dream and passion regardless of age or gender and surround yourself with individuals who are supportive of you and what you want to achieve.”

READ MORE: Karate’s popularity on the rise among Greek Australians

The challenges Maria has faced in her own karate journey have bolstered her motivation into creating a more positive space for current and upcoming athletes and coaches. Ms Alexiadis is no stranger to people underestimating her own abilities on and off the mats.

“I feel like I’ve experienced all sides of the sport having been in it for so long. And although I have had very many positive experiences, it hasn’t all been smooth sailing. It is the negative experiences that made me put my hand up to get onto the executive. I felt because of these experiences I could try and improve the sport and make a positive contribution. I’ve always said that I would never want another athlete to go through the few negative experiences I’ve had in my sport. This is what continues to drive me” she said.

Although there has been the odd person who has not taken so enthusiastically to her passion for the sport, there has still been a lot of support along the way, along with so much she is grateful for.

“I received the OAM at the Queen’s Birthday Honours and that is really special and unexpected, particularly for a sport like ours that isn’t as well-known as AFL or NRL and the fact that I am a female in such a male dominated sport and organisation.  It’s really nice to know that there are people within my sport who appreciate and acknowledge all the work I’ve contributed to the sport, she said”

“I really do believe that it’s a great sport for people to participate in. There are so many skills for example, such as resilience, leadership, and confidence that I’ve been able to acquire because of karate. I love sport in general and I think everyone should be playing something. If it’s not karate, go out there and do something because physical activity is so important for our overall health – body and mind.”

Today Ms Alexiadis has become a catalyst for change, wanting the athletes under her mentorship to believe in themselves and always push forward, something her own parents taught her growing up.

“My mum is one of the strongest women I know. She’s always remained positive and she’s always fought for what she believed in. My dad has always pushed me. You know he’s a Greek dad, so when you got home and said you got an A his response would be, ‘why didn’t you get an A+?’, although this may be perceived as a negative, I think that just always made me believe that I can do better and I could push myself a bit more. They are the inspiring and have had the biggest impact on me,” she said.