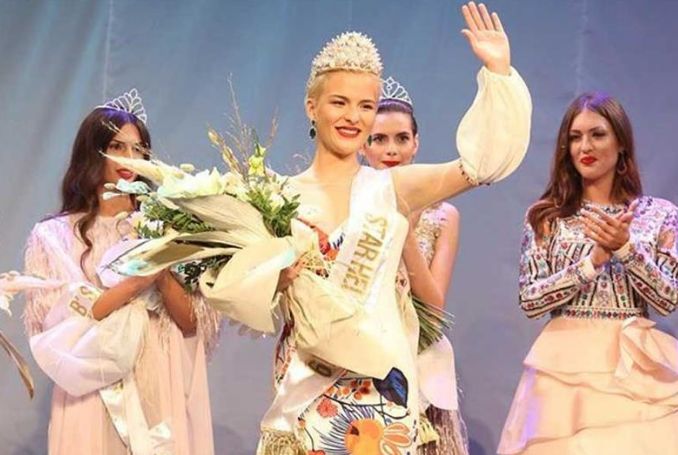 Rafaele Plastira, Miss Greece, does not want to go to a pageant hosted by Israel. Photo: Video grab

Rafaele Plastira, who hails from Trikala in central Greece, said her decision to withdraw came after the announcement was made to hold the Miss Universe pageant in Israel in December.

She uploaded a photo of herself holding the Palestinian flag on Instagram and wrote: “I cannot go up to this stage and pretend that nothing happens when people are fighting for their lives out there.”

The Palestinian Campaign for the Academic and Cultural Boycott of Israel (PACBI) welcomed the contestants decision.

The young beauty thanked everyone for sending her love following her decision and though she said it pained her to make such a decision, she believes that humanity is above beauty pageants.

“It’s so beautiful to see how much love and support and understanding I get from all of you,” she wrote.

“Palestine you are not only in my mind every day but you have the most beautiful place in my heart forever.”

Star GS Hellas quickly announced that runner-up Katerina Kouvoutsaki would be replacing Plastira: “As of today, the new Miss Universe Greece 2021 is Sofia Arapogianni. Our beauty queen Katerina Kouvoutsaki will not be able to represent our country, for the crown of the universe, for health reasons, which do not allow her to travel.”

"I can’t go up that stage and act like nothing is happening when people are fighting for their lives out there." https://t.co/dD6d4rHEvY#BoycottMissUniverse2021 pic.twitter.com/APpfzAhosn