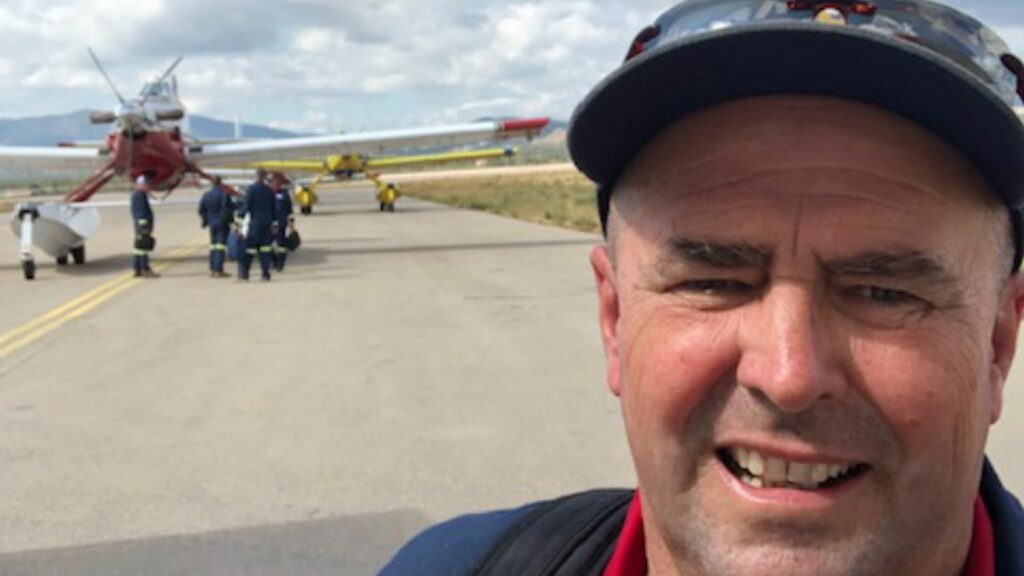 Australian pilot Craig Patton with the Air Tractor Fire Boss (AT-802F) in Greece where he and six other Australians helped fight the devastating fires earlier this year. Photo: Supplied.

The fires that ravaged Greece earlier this year were the most dangerous that veteran Australian aerial firefighter Craig Patton had encountered in his 32-year professional career but what also impressed him was the resolve of the Greek people to fight those fires.

“The Greek system is good. There was such a quick response to the fires, they believe in keeping small fires small instead of trying to deal with a fire once it has become large. You have to keep little fires little because if you don’t, then houses, communications towers, wind turbines all burn. They were all protected by the Greek people.

“I saw families taking a hand in fighting the fires approaching their homes. I was impressed by the will of the Greek people to put out the fires,” Mr Patton told Neos Kosmos.

“I would fly over and see mums, dads fighting the fires. I saw kids on motorbikes taking water to fight the fires and I saw old women dragging hoses. I was gobsmacked.

“If you have ever stood before a 40-knot wind in 47°C temperatures, it is like being in front of a blast furnace, and you are standing there to face a fire. I saw people dragging hoses up mountain slopes that you cannot walk up and I would return on another run five minutes later to see the hoses had been moved hundreds of metres up that slope.”

He also praised the dedication and professionalism of the Hellenic Fire Service officers who were as good as any he had encountered in work that taken him to fight fires in the United States, Alaska and Australia.

“They were young, keen and fit as buck rats who wanted to do well and put out the fires. The Greeks were on to it. They had trucks parked every few kilometres manned by men and women who were ready to go at a moment’s notice” said Mr Patton. He said the equipment that they used was old and the roads on which they worked were often in a bad state – another effect of the financial crisis.

Mr Patton who hails from Quirindi on the Liverpool Plains of New South Wales had arrived in Greece in June, nearly two months before the big fires, on contract with six other Australian pilots to demonstrate to the Greek fire authorities the effectiveness of the Air Tractor Fire Boss AT-802F in fighting bush and forest fires.

A single-engined, fixed-wing aircraft fitted with Whipline amphibious floats, the Fire Boss can scoop to 3,000 litres of water from nearby lakes, rivers and the sea to drop on a fire. It is capable of delivering 53,000 litres or more of water in an hour. It is particularly effective when it flies out in a group of four to six aircraft.

“I knew as soon as I got into Athens that it would be intense, it was already 37°C. There were forests particularly around Tatoi that had not experienced a fire in 30 years,” said Mr Patton.

In the ensuing months the Aussie team of pilots and their aircraft were to operate around Athens, Volos, Andravida, as far east as the Turkish border and over Evia and other Aegean islands. They fought fires around Corinth and helped to protect ancient Olympia from the air.

“I probably saw more of Greece in the three and half months I was there than most Greeks see in a life time,” he quipped

“The Greek fires were probably the most dangerous I have encountered because of the urban interface of a high human population living in areas of incredibly dry vegetation. It is also a very steep country with massive hills and mountains that are very impressive but also very testing on firefighters.

“The hills were tinder dry and the fires could go up their slopes in minutes,” he recalled.

“We were flying sorties from Tatoi Airport as the fires encroached on the town. We had to ask the ground crew to get our things from our hotel because the it was being evacuated while we were up in the air.

The Australian crew flew with two exceptional interpreters, Alexandros Garmpis and Pavlos Panagiotopoulos, who had a vital role to play coordinating communications with the authorities on the ground.

“The communications system had to be very good because there were situations where we were fighting fires in very poor visibility with 25 other aircraft operating within 10kms of each other.

“There were also US, Canadian, Kiwi and Russian crews flying so very good procedures had to be in place to contend with logistic and linguistic issues.” Craig Patton with his Greek interpreter Alex Garmpis on land after another fire sortie. Photo: Supplied He also praised Greek fire preparedness highlighting the system of water tanks in place around Athens and other parts of the country from which helicopters could draw water to fight the fires. He highlighted the preparedness of the Erickson Air Crane operators who played a big role during the fire emergency.

Over the three and half months that Mr Patton was in Greece, he notched up about 300 hours in the air in close to 150 sorties.

“In one patrol, which lasted three-and-a half-hours, we were first on the scene for four fires. While you cannot always put out a fire from the air, in most situations you can slow it down enough so that the ground crews can get to it,” he said.

“I have worked with the best firefighters in the world and the Greek guys were bloody good. They were heroic, absolute Trojans, and I feel pride in the Greek-Australian relationship,” Mr Patton said after his Greek experience.