Ged Kearny: “If aged care workers do not get a pay rise, they will go and stack shelves in Woolworths”

Neos Kosmos talked to Ged Kearney, Shadow Assistant Minister for Health and Ageing who is squarely focused on reforming the aged care system and highly engaged with her electorate in the subdivision of Cooper 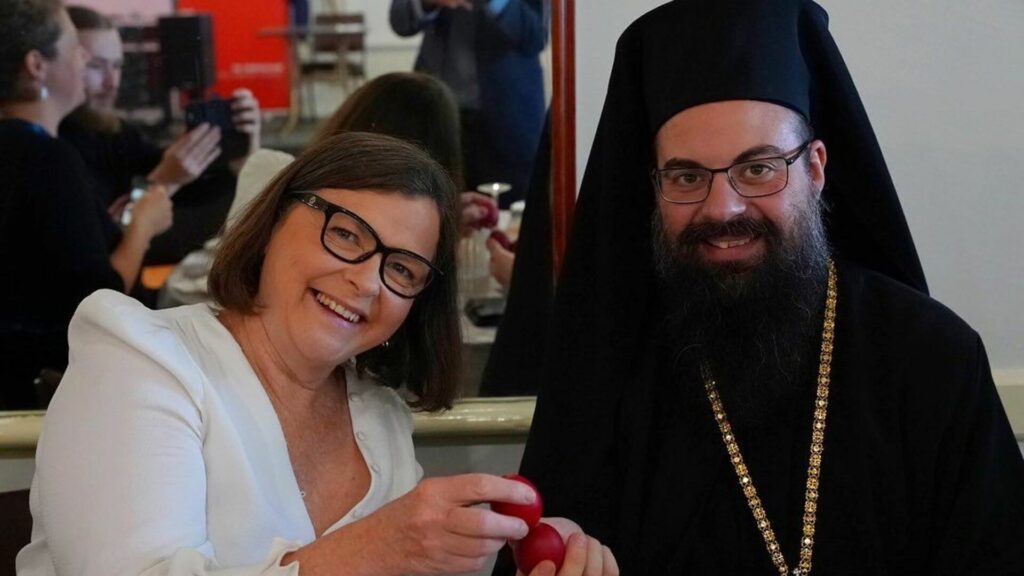 Ms Kearney talked to Neos Kosmos after hosting a morning Greek event. She said that Greek elderly are “worried about their pension and social security, and about aged care.”

“We love the Greek community, we really do, and they’re not backwards in coming forwards when they want something addressed” Ms Kearney said to Neos Kosmos

Ms Kearney a nurse and later the Federal Secretary of the Australian Nursing Federation, is invested in the cause of better pay for aged care and health workers.

The United Workers Union currently have a case before the Fair Work Commission calling for a 25 percent increase for aged care workers’ salaries.

“If aged care workers do not get a pay rise, they will go and stack shelves in Woolworths where they get more money, or they’ll go and work in other parts of the community sector where they know they get paid more.”

“As Anthony [Albanese] likes to say, ‘we are putting the nursing back into nursing home,’ it means the difference between being able to feed someone, or to make sure that they have a clean incontinence pad, that they can get some physical exercise, or see the physio.”

Ms Kearney says that food standards need to rise as “many people in residential aged care are malnourished and undernourished.”

The standards will be written into the Age Care Act and will be legislated says Ms Kearny.

“All facilities, public and private, will have to meet the standards, however, if you can’t attract people to work in the sector then it’s not going to be worth it, so pay rises are very important.”

The member for Cooper also wants to “crack down on dodgy age care providers.”

“There are providers out there buying Maseratis and mansions in Toorak rather than caring for their residents.

“We will make sure that every cent that goes to aged care is spent on care, we will have better transparency and accountability.”

Home care packages will also be increased according to Ms Kearney.

“Tens of thousands of people die waiting to get a package, it’s outrageous, we will increase the number of packages, and crack down on some providers.”

“Most providers [of home care packages] do the right thing, but some are gouging massive amounts out of the packages for so called ‘administrative costs’ – Labor are going to make sure that the maximum amount that goes into the packages is spent on care.”

Neos Kosmos asked Ms Kearney why so many new immigrants with degrees in medicine and health are driving Uber? Was it the Australian Medical Association (AMA) and health unions which are keeping a closed shop?

She agrees that better pathways are needed for people who come from overseas with qualifications.

“We have to be careful because there are standards around language and language is important if you’re in healthcare, you have to be able to communicate well and you need to make sure that they understand the Australian healthcare context.”

The suburbs of Cooper have transformed. Once enclaves of working-class Irish and post-war South-Eastern European migrants are now creative hubs of educated professionals, mixed in with ageing migrants whose children are subdividing 700 sq mt blocks to build million-dollar town houses. Then there are the recent waves of South Asian, Arabic, African and Chinese aspirational immigrant communities. There are also many cashed up tradies.

Ms Kearny is cognisant of the altering demographics and new erratic political allegiances. The new progressives, look to the Greens, while traditional migrant voters and some of their offspring, feel increasingly alienated by ‘woke’ politics.

“When I ran in the byelection the vote a lot of people that voted Green here, but that has settled down and I have quite a comfortable margin.”

The shadow assistant health minister says it is about understanding what the local issues are, “and they very rarely change.”

“People want their kids to have a good education, they want a decent health system, they want their parents looked after in their old age, they want decent jobs, at the end of the day they you know what we will do about climate change, of course there is the issue of integrity and this electorate cares very much about asylum seekers and immigration.”

As the discussion ended Ms Kearney stressed, she fell “totally in love” with Anastasi and that she attended last Saturday.

“I had never been to midnight mass at a Greek church, I love the way it’s all sung and the candles outside it was really beautiful.”

Ged Kearney is very engaged in her local community and is aware of national issues in ageing and health. Will she win Cooper? It appears so. Will Labor take government? A tough call to make yet.