Cutting through the hubris, ideologies, records and promises to decide? 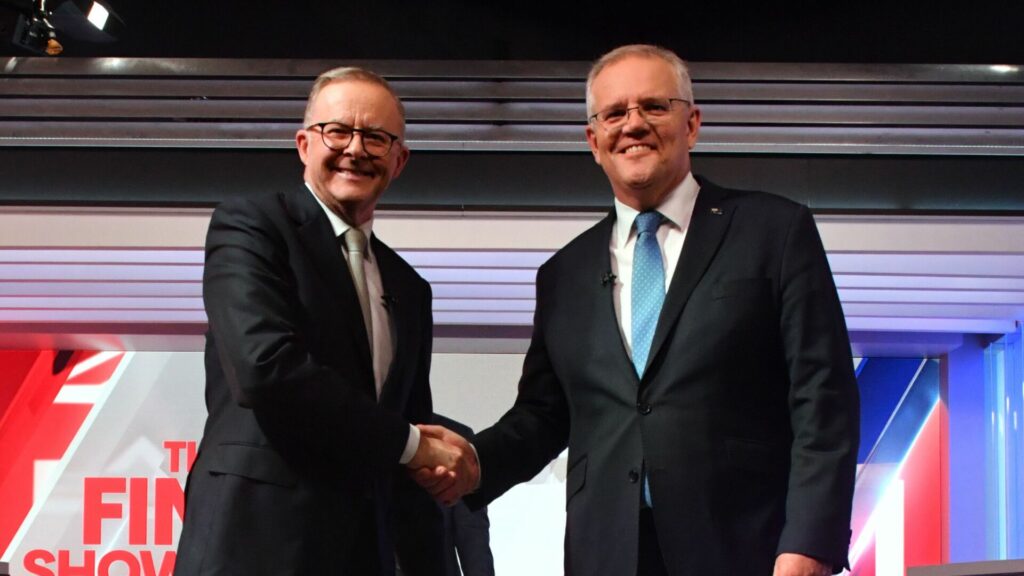 Three days prior to the 2019 election I wrote that the choice was between a salesman, Scott Morrison, and a visionary, Bill Shorten. Australians decided to vote for Morrison and the rest as they say is history.

Shorten’s vision was based on addressing climate change, health, education, more good jobs, and NDIS. Morrison quickly realised that there was nothing to be gained by attacking the vision and instead concentrated on a fear campaign around Labor’s supposed inability to manage the economy and its higher taxing prescriptions. It worked.

In the last three years Australians have got to know Scott Morrison and must now judge him against a new Labor leader in Anthony Albanese – a Labor leader who has shown a preparedness to move away from outdated ideological positions and embrace measured practical policies.

The leaders’ debates have changed the parameters of the choice in electors’ minds. Increasingly they are critically looking at Morrison’s hubris as seen in his body language, his aggression, and his choice of words – what “I” have done and what “I” will do. Morrison has belatedly recognised this and in a bizarre admission has said that he will somehow change his personality by being less of a “bulldozer” – and presumably less hubristic.

Albanese, on the other hand, has shown considerable humility. He is certainly determined. But in recounting his humble beginnings, he points not just to his own successes, but the opportunities provided by Australia to persons such as he. He emphasises the “we” and building a better future together. In my dealings with him while a Victorian Minister and he a Federal Minister he did not exude superiority over mere state Ministers as many Federal Ministers often did.

Morrison has recognised that things were not going his way. This is what led him to try to promise a softer Morrison going forward. At the Liberal launch he even borrowed Labor’s pitch emphasising a better future – with a new softer Morrison.

But to me the most important thing that came out of the launch was not that Morrison has changed. It was that he revealed his ideological side. Labor’s attack ads “Its not my job” were directed at his abrogation of responsibility and hubristic style. The new insight from the launch is that Morrison really does think many things are not his job – and this is grounded in ideology. In contrasting his housing proposal to allow individuals to use their super up to $50,000 to buy a house versus Labor’s shared equity scheme, his message was pure ideology. The government having a share of your house versus us allowing you to do it yourself – by raiding your own super.

Morrison’s scheme has been criticised by organisations and economists. But my point is that it is based on superficial, outdated liberal political theory that does not reflect the realities of modern society or even modern liberalism.

Labor has a real chance of winning. I don’t think Morrison will be able to overcome perceived character negatives with an “I will change statement” or by a simple ideological pitch, or by using fear. Albanese has stridently rejected suggestions that Labor will be soft on China or on border protection.

It thus comes down to Morrison relying on voters having a lingering doubt about Albanese delivering on the economy. That’s why Morrison spent so much time at the launch outlining his economic record as evidence of the better economic manager claim. But does even this stand up to scrutiny.

Yes, there has been some recent success in employment growth, but the Coalition’s ideological hands-off approach has resulted in a massive shift from wages to profits, despite the pandemic. In 2015, 25 per cent of national income went to profits and 54.1 per cent to wages. By 2018, profits received 27.8 per cent and wages 52.2 per cent. And today wages are at 50.1 per cent and profits close to 30 percent. This is a shift of about $400 billion from wages to profits. And yet Morrison argues that the lowest paid workers should not get a wage increase. This seems clearly based on ideology, not the economy or employer’s capacity to afford it if the above figures are to be believed.

Let’s look at economic growth. During its six years in Government following the Howard years Labor achieved average growth of 2.8 per cent despite the impact of the GFC. The Coalition up to the 2019 election achieved 2.6 per cent. The last three years have been a combination of negative growth because of the pandemic and a predictable uplift as we recover from it.

What about debt? Under the first six years of the Abbott-Turnbull-Morrison governments, Australia’s debt doubled from $250 billion under Labor to $531 billion. That’s before the pandemic. And we now face the prospect of $1 trillion of debt against a backdrop of rising housing interest rates.

Increasingly Australians are seeing Morrison’s argument about better economic managers as hollow when they look at the debt our children will be saddled with, the declining share of the national income going to wages rather than profits, and impending higher interest rates.

It’s becoming clear in this campaign that Morrison’s hubristic claims about superiority in economic management, his supposed character shift, his newly expressed ideology, and his resort to fear will not convince Australians.

Albanese’s more humble approach of setting aside ideological conceptions of the past, adopting practical, measured, achievable policies and putting to Australians that “We can build a better future together” is more likely to carry the day.

Theo Theophanous is a commentator and Former Victorian Labor Minister.