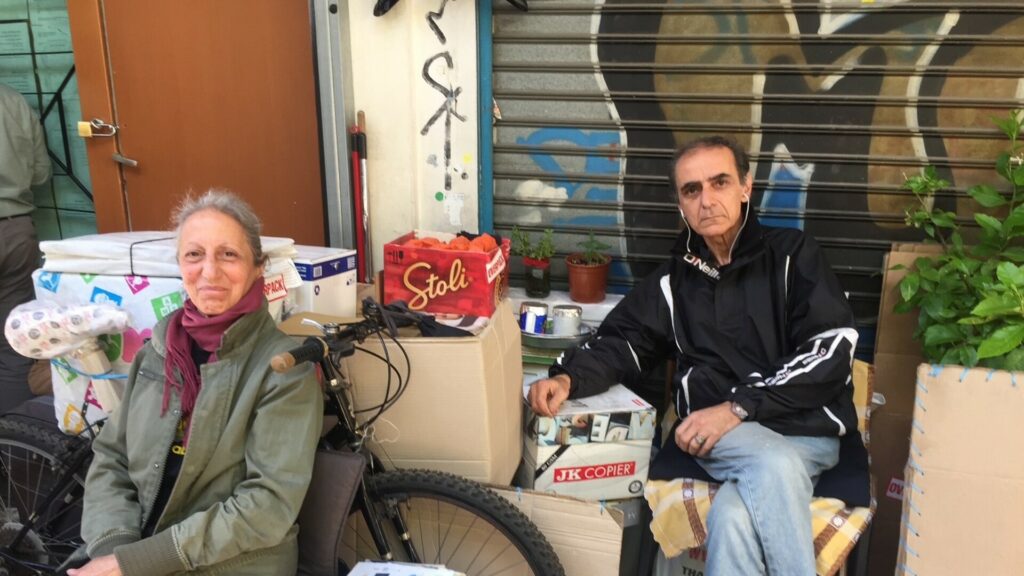 Refugees that waited outside the GCR offices and welcome Stephanie Lagos on a daily basis. Photo: Supplied.

Stephanie Lagos, the Australian refugee and migrant advocate, the social worker, and psychologist, had carved out a significant career in Melbourne over 20 years. The former director of Spectrum Migrant Resource Centre, and diversity expert at the legal firm Slater and Gordon was dug in deep. Yet, she left it all behind in 2015 to make a new life in Greece, to give back, to care for her parents, both now departed.

Lagos’ commitment to her parents “impressed the Greeks.”

“They’d ask,  ‘How can a daughter leave her life to care for her parents?’ just shows you how out of the loop I was with Greek culture in Greece, as a Greek Australian,” she laughs.

Lagos’ father suffered from Alzheimer’s and was in a day care centre, Lagos, the dutiful daughter would drop him off, then spend time with her mother, who was also not well. It was time to care for those that loved her.

“They had been beautiful parents who always cared and loved me, it was my time to give back.”

When not caring for her parents she spent time on her own wellbeing.  She met new friends, read, took in the culture, Athens is a city made for the living.

Refugee crisis rupts and Lagos jumps Into the fire

That all changed abruptly when Lagos found herself in the epicentre of the 2015/16 global refugee crisis, when over a million Syrian and Afghan refugees poured into Greece. Many refugees lost their lives trying to make it to the Greek islands off the coast of Turkey in rubber dinghies. The grim task of fishing corpses out of the sea was a new reality for the coast guard.  The Mediterranean sea is deceptive, one minute it’s a calm sea warmed by the sun, and the next  the lair of of Scylla and Charybdis.

Lagos’ instinct, born of a lifetime working in the Australian multicultural sector, kicked in.

Lagos says that the ability for Greeks to mobilise and get the job done, is “mysterious.”

“Anyway, my social indulgence was too much” Lagos says, “I needed to connect myself with the community.”

Initially the Greeks did not welcome her as a volunteer, their scepticism of the Diaspora is an involuntary reflex for most of them.

“If they don’t know you, or you don’t come recommended, they exclude you.”

Lagos frustrated, talked to a friend in Brussels, who worked for the International Rescue Committee (IRC). Her friend advised her to consult for the IRC, a partner of the Greek Council of Refugees (GCR).

Trying to save refugee minors

Lagos started to work with the Greek Army in their rapid emergency response.

“This wasn’t  refugee advocacy like in Australia, we were in the eye of the storm, often I had to be flown to refugee camps in military helicopters, intense, and I have to say, it was exciting.”

The Greek Army is highly respected says Lagos, and once she was acknowledged by them, she was accepted by her peers.

“Greek graduates working with refugees weren’t from a privileged background, so they didn’t see a huge difference between themselves and the refugees – they weren’t far off from becoming economic refugees themselves.” Stephanie Lagos

“We established rapid safe zones for unaccompanied minors, we had to get them away from conglomerates of people in refugee camps.”

“It was mainly boys aged 15 and 16 years old, if the family couldn’t afford to pay for a smuggler’s boat, they’d send a male teenager to act as a kind of flagship for future family reunification, once refugee status was given.”

The danger was that male minors could all into the Athens sex trafficking trade.

Events unfolded rapidly Lagos and had never faced a crisis of such magnitude. “This was huge, particularly in Greece, a country with relatively weak systems in these areas.”

Lagos was surprised with the involvement and efficiency the Greek military, “regardless of some attitudes, they showed real empathy for the refugees.”

“They were professional, efficient and very relaxed, if this was in Australia it would be total chaos.”

A human tsunami washed over Greece while in the background the Greek Financial Crisis rolled on, with catastrophic consequences.

Youth unemployment soared over 25 per cent. Greece’s middle classes were gutted, in less than two years. The poor became impoverished.

Greece was now the gateway for a river of refugees trying to make it to Germany and the Nordic Europe. They knew that Greece as not the economic safe harbour. Lagos says that the crisis did not have a “massive shock factor on the Greeks”.

“Greeks have lived hundreds of years with invasions, colonisation, civil wars, and unrest, and this was just another crisis.”

“The Greeks had a relaxed attitude towards refugees, they cared, but didn’t exhibit annoying ‘rescue tendencies’ like we do in Anglo Australia. They embraced the chaos.”

Part of Lagos’ job was to recruit people for “jobs in refugee crisis management and for jobs without job descriptions.”

“I was developing infrastructure that didn’t exist, all on the go.”

Lagos was initially confronted her compatriots’ “laissez-faire and often fatalistic attitude.” But soon she realised that the Greeks “don’t like hierarchies” or structure.

“I imposed systems and procedures and they resisted. They like chaos, yet mobilise when it comes to the crunch and do so very fast.”

Lagos says that the ability for Greeks to mobilise and get the job done, is “truly a mystery.”

“I don’t know how it happened, it’s crazy, one minute 400 boys were sitting around in a refugee camp, next they were in safe spaces, in my Australian trained mind, I just could not understand.”

“The Greek military is highly developed, and refugee workers had no issue taking orders from the military.”

The refugee crisis also became a new employment scheme in the financial crisis. The EU, and external agencies ploughed money into Greece to deal with the crisis. And the Greek government utilised the crisis to leverage support and influence.

Greece was the frontline state and a holding station for a million refugees as EU nations fumbled. Central European nations like Hungary barred refugees from entering their borders with careless brutality, against a raft of human rights conventions. In England the crisis was manipulated to ramp up shrill Brexit narratives. Greeks endured and did what they couldm it was just one more crisis.

“Occupational therapists, health staff, social workers, and other young people that could not get a start, were given positions. It was like Christmas for them.”

They were “did something good, and it changed their attitude towards refugees, also, they weren’t virtuous, they weren’t ‘saving’ people, like Australian activists.”

“Greek graduates weren’t from a privileged background, they didn’t see a huge difference between themselves and the refugees, they weren’t far off from becoming economic refugees themselves.”

Many Greeks protested in support of refugees; “even cynical ones saw the economic boost refugees created”

The refugees created jobs throughout Greece, “in medical and social services, in logistical and food services.”

Many settled into villages, towns, and cities “that had been neglected due to the financial crisis.”

They worked, rented apartments and provided services. Syrian doctors took up posts abandoned by Greek doctors that left during the financial crisis.

Also, the Greeks knew that they weren’t that different from the refugees coming in.

“In their mind, for Greeks becoming refugees was not beyond the scope – crisis is natural- war, chaos, and catastrophe are embedded in Greece’s DNA.”