“Say her name, say her name” thousands gather at protest against Iranian oppression

Global protests over the death of 22-year-old Masha Amini at the hands of Iran’s brutal ‘morality police.’ 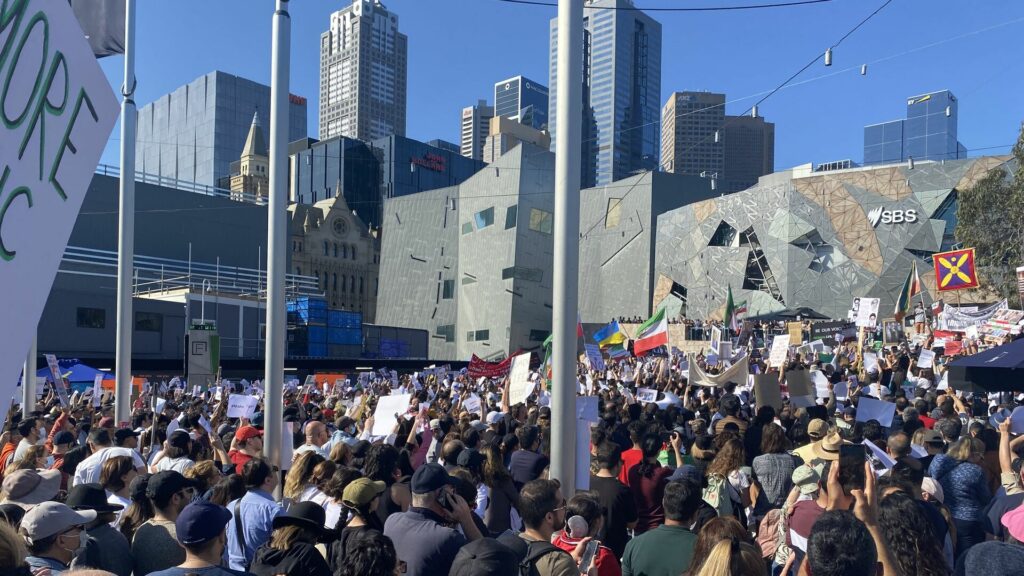 Crowds gather at the protest over the death of 22-year-old Mahsa Amini at the hands of Iran's feared morality police. Photo: Supplied

Saturday afternoon thousands of Melbourne’s Iranian community, and non-Iranians, gathered at Federation Square as part of global protests in opposition to Iran’s Islamic regime over the death of 22-year-old woman Mahsa Amini.

Amini died from head injuries after alleged torture while in the custody of the Islamic regime’s morality police. She had been accused of violating Iran’s mandatory headscarf law.

Neos Kosmos spoke to an Iranian-Australian professional at the protest, who has been living in Australia since 2011, she asked that her name and profession be withheld in concern for her extended family’s safety in Iran.

“We attended in support of the people of Iran, especially the women who have been repressed by the Islamic dictatorship for more than 40 years now. Over the years many men and women have been tortured and killed for standing up against this regime.”

“Mahsa Amini went on holidays from her city to Tehran, there she was arrested by the ‘morality police’, because she wasn’t wearing the ‘mandatory’ Hijab correctly,” she said.

“Demonstrations have erupted across Iran and more than 70 people have been killed and many arrested.”

“The people of Iran have been cut from the world as the internet has been disconnected and social media has been filtered.”

She believes the protests by the global Iranian diaspora and the solidarity expressed by non-Iranians “has put the regime under pressure.”

“The Iranian government is scared; they can sense that this is a revolution.”

“They are arresting everyone who takes part, even if it means a simple Instagram post, or having breakfast in a local café without the Hijab.”

“They know they can’t just do whatever they want, the world is watching,” said the Iranian Australian.

The Greek-Australian friend of the Iranian at the protest also requested that her surname be withheld in respect to her friend.

“I got very emotional… especially when they chant, ‘Say her name, Say her name’.

Konstantine Kalymnios, the Melbourne-based contributor to Neos Kosmos attended as an expression of his “solidarity with the beleaguered Iranian people.”

“As a father of two daughters, I cannot countenance a world that restricts the horizon and discriminates against that part of the population that brings forth life and takes away their lives when they don’t confirm to preconceived expectations and demands.”

“The appalling and unacceptable statistics of women murdered as victims of domestic violence in Australia and Greece makes this is a global fight.”

“Finally, espousing the causes of freedom and justice lie at the essence of what it is to be a Greek”

NB: Neos Kosmos has not published the faces of Iranian women at the protest in fear of what the regime may do to any of their families if recognised.