Kat Theophanous is “building a pipeline to language learning from young”

Kat Theophanous beat the Greens in Northcote by engaging with the multicultural communities and she aims to do that again. 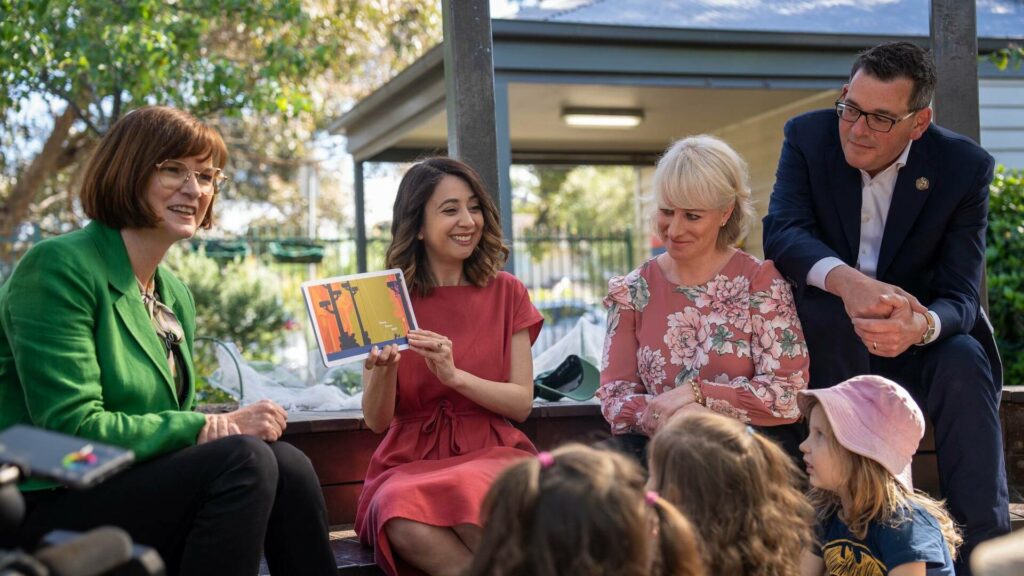 On Monday, Kat Theophanous the member for Northcote, was at Clifton Street Kindergarten Child Care Centre, Northcote, flanked by Victoria’s premier Dan Andrews, his partner Cath, and the Minister for Health Mary-Anne Thomas to announce a $69 million package to help new parents.

Part of the funding, $15 million will be invested in an early parenting centre.

“Northcote doesn’t have one, and indeed the inner north does not have an early parenting centre,” Theophanous said.

She emphasised that it is “technically a public hospital which offers residential overnight stay, and they will run day programmes.”

The centre will be for the ages of zero to four and it is an “acknowledgement that parenting is tough.”

Theophanous, a young parent herself, has a three-year-old and a five-year-old, and says she “knows what it is like to be a new parent.” She entered parliament as a newly minted member when she was pregnant, “I gave my first speech in parliament and then had a baby.”

“Those first years are tumultuous, there are physical and mental changes that happen, and you can end up feeling isolated and overwhelmed easily.”

“So, it’s about putting supports around the whole family” Theophanous said.

The centre will assist with sleep and breastfeeding and an “expanded offering building resilience and helping parents.”

It will look at the relationships between “Mum and bub and Dad and bub and the whole family unit together,” she said.

Theophanous said that the Royal Commission into Victoria’s mental health system showed that “women are more at risk of developing mental illness during the perinatal period, than any other time in their lives, dads also experience perinatal anxiety and depression, it’s about developing a wraparound service.”

Another announcement is the commitment for “$6 million to fund multicultural story time for the zero to five age group.”

“Multicultural story time will allow community organisations, councils and other groups to apply for grants to run in language story time,” Theophanous said.

Kat Theophanous played a key role, along with the Greek Community, the Archdiocese and Greek media to save Modern Greek at La Trobe University last year. The campaign was successful, and the program is now off life-support, and has secured a 20 percent increase in enrolments in Modern Greek.

The Cypriot Hellene says that language maintenance is critical.

“We are building a pipeline to language learning from young, it’s important to children to have a solid foundation, as you get into those third and fourth generations, it is harder to retain the language,” Theophanous said.

Funding will go to libraries, community centres, councils, community groups who apply and the languages will include Hindi, Punjabi, Mandarin, Arabic, Turkish, Vietnamese, Italian and Greek.

Theophanous is tight with her constituents and knows that “there is a demand for Greek story time in the area.”

“Mums just like me, can take our kids there and relax, they can meet other kids and parents.”

“We have large Greek and Italian communities, and although the first-generation migrants are older, the relevance and the desire amongst the second and third generations to continue language learning is very strong.”

Kat Theophanous won back Northcote from the Greens in 2018. She claims that the Greens do not engage with multicultural communities particularly the older ones.

“I have not seen them genuinely engaging with our multicultural communities over the last four years, or in the campaign more recently.”

Where the Greens have taken control of local government in Yarra, Moreland, and Darebin, they have a “record of defunding multicultural communities.”

Returning to the fold

Theophanous is of political pedigree; her father Theo Theophanous was a minister in various Labor governments.

Initially she rejected politics. “Politics was not something that I wanted to get involved in.”

“Politics meant that my dad wasn’t around and wasn’t available when I was growing up.”

She was an “academic kid” and did an honours degree in philosophy as well as media communications.

After a stint as at SBS she realised that it wasn’t enough for her. The epiphany occurred when she began working as an adviser for Fiona Richardson the former member for Northcote.

“Being a ministerial adviser to Fiona Richardson, who was a minister at the time for women and for the protection of family violence, I saw unprecedented investment in mental health, and programs to prevent family violence”.

“I could see tangible changes happening in my community for the better, like making women and children safer and more equal. It showed me what really is possible when you get into politics.”

Theophanous says that parliament has adjusted to benefit MPs with babies during the last term of government.

“They didn’t have a feeding room before, now they established one, they never had pram parking now they do, it is a gentler place for men and women, there’s plenty of dads that now bring in their little babies and their toddlers.”

Asked if she will be angling for a portfolio, Theophanous said, it “is a complicated process”, but she is ambitious and has “lots to offer the party and government.”

She said that the Andrews’ government has “not wasted a day of the last four years and will not waste a day if re-elected.”

“We’re not going to waste a single day in the next period of government if we are elected, whether that’s rolling out our free kinder, or getting more free TAFE courses up, or expanding our health network.”