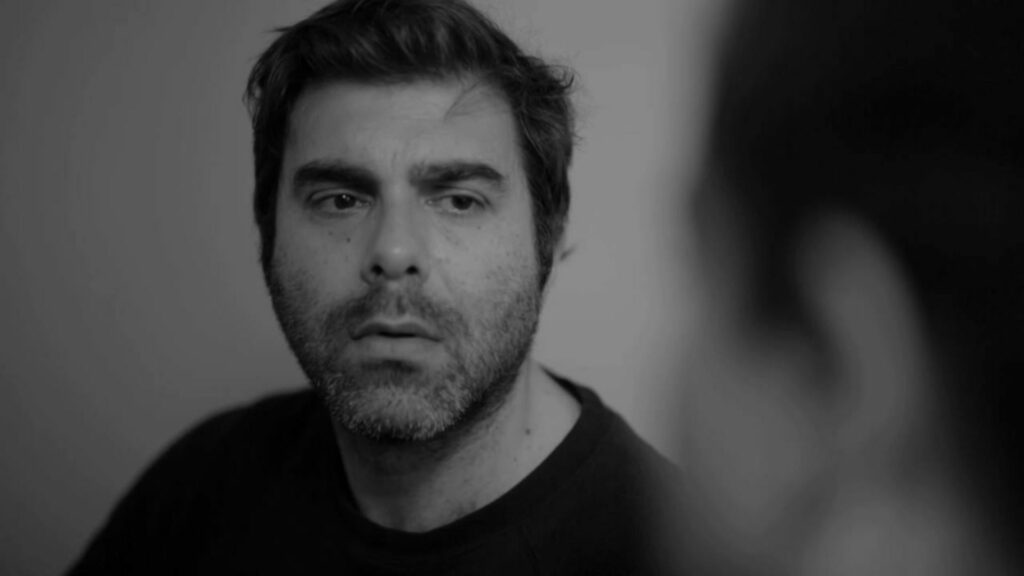 Each performance of Untitled is different, a new construction born of one random word, a trigger for character, and context.

“It’s all born of a single word trigger, I go up cold every night, in a different costume, that would colour a particular scene,” says Arabatzis

A black screen connected to the control desk linked to laptop goes through a word scrabble and “the the tech stops the process and a random a word appears and from that point there’s a slow transformation triggered by that word.”

“I look at the word then take my cue and perform, but the theme may not be about the word specifically, but around the word, which is the trigger.”

This technique he learned when he studied in New York, “as part of a theatre company there”.

Untitled is a raw theatre. The lights go down the music begins, and a theatrical show begins.

“It has a clear beginning and a unique end, which I can’t give away now,” Arabatzis says.

The lighting, audio, and visual aspects are key to “creating context and in letting the audience know what is happening.”

“There’s a structure. There’s a fence around this,” Arabatzis adds.

In New York, Arabatzis studied under Jon Shear the director and producer of Urbania – nominated for the Grand Jury Prize at Sundance Film Festival. Shear featured in Independence Day and Heathers; and starred in the Pulitzer Prize winning production of Angels in America and appeared on Broadway in many works no less, Six Degrees of Separation.

Arabatzis immerses into character and his subconscious often drives the development.

“I use a word to trigger the subconscious, and I see how far I can go then I go off.

“I’m not sure which character turns up. I’m not sure who will show up like it might, it might just be me as ‘Ange’ telling a story then I might slip into a character.”

Asked if his YouTube alter ego will make an appearance in Untitled, Arabatzis says “I’m sure Many will…he’s got to at some point”

Untitled is “honest and seeks truth.”

Arabatzis has wanted to do this for over four years.

“I was going to do it back in 2018, but it wasn’t the right time for me, and I’ve had a long break from performing on stage, so it feels like it’s the right time to get up and perform again.”

Arabatzis who also has a Masters in Film and Television from University of Melbourne, has over the years made many short films, and has appeared in Australian television series such as Underbelly. Now he is working on his production of a feature film, Anathema- “a surrealist exploration of the of the complexities of immigrant life in Melbourne.”

He says that that Untitled piece will challenge his capabilities and limits.

“What I learn, what I experience from here may be used in future shows that I’m going to put on with my theatre company.”

As if Arabatzis was not doing enough as a filmmaker, and YouTube comedian, he is using Untitled to launch his new theatre company Warm Bodies.