Last Saturday saw the culmination of six days of events for Oh My Greek Week 2016, the Greek culinary festival spearheaded by chef, TV personality, restaurateur and author George Calombaris. Join Ross Karavis as he places you in the centre of the two events – the master class and dinner – and consider why this culinary festival matters. 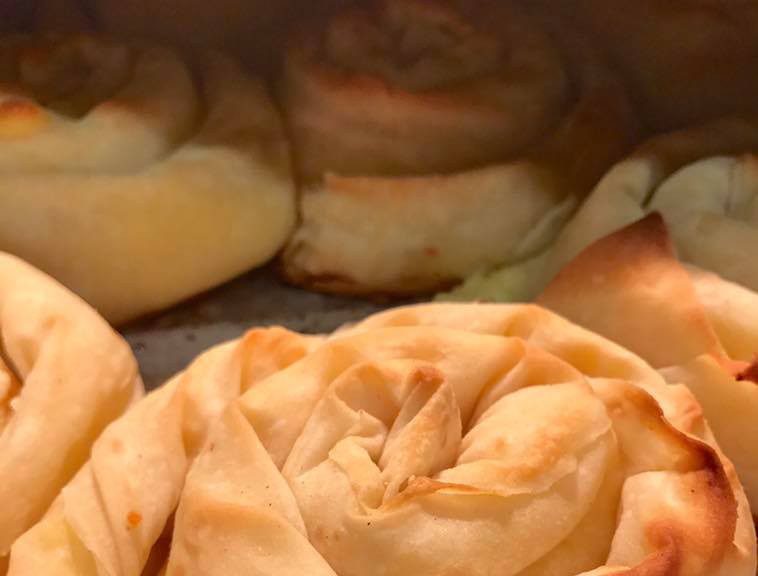 At 11am on a Saturday morning there is a queue in the narrow entrance to Hellenic Republic in Kew. The queue comprises middle aged Greek Australian women, some with their mothers, some with their friends and daughters. All are waiting to attend the masterclass by Stelios Paliaros, the pastry chef from Greece with his own television show, monthly magazine and his zacharoplasteio in Kolonaki.

We are all ushered into the main dining room before proceeding to the masterclass. Sitting at my table are eight women. To my left are two local cookbook writers, Kathy Tsaples and Mary Valle, to my right are sixty-somethings, Georgia and Eirini, who are both fans of Parliaros and his television program, ‘Sweet Alchemy.’ Directly opposite me are two forty-something west-side professionals and food lovers, Grammatiki and Ioanna, who regularly attend cooking classes and food events. To their left is thirty-something public servant Suzie, who is here with her Indian colleague, because she is interested in exploring more about Greek baking following the death of her grandmother.

Elsewhere in the room is a mixture of the Real Greek Australian Housewives of Doncaster with their Bling! Bling! Bling! and the forty-something single women who enjoy, eating, drinking and being modern. 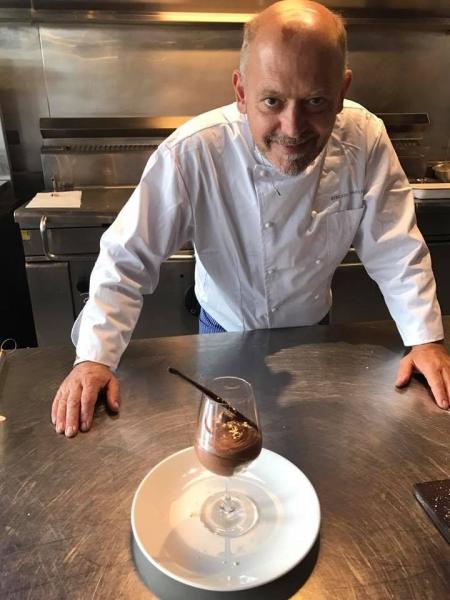 We are ushered to the upstairs demonstration kitchen where Parliaros warmly welcomes us. Over the next 45 minutes he proceeds to prepare three traditional Greek sweets and a French classic, each with a twist. There is his take on the kourambie, one with icing sugar and one with a vanilla scented sugar glaze, a melomakarono stuffed with a whole walnut, a baklava with a pistachio paste filling and a chocolate mousse made with olive oil.

Parliaros works with authority as he prepares each of the sweets. There is an economy to his movements, a self assuredness and control that comes from three decades of working at the top of the game. He is measured, economical and considered and his instructions are simple and direct and delivered with fluency. There is a minimum of fuss as each finished sweet is plated, decorated and put on the front of the kitchen bench. The women hang on his every word. They raise their eyebrows when he applies a glaze to a kourambie. They nod knowingly when he shares his ‘secret’ to making a great baklava – the pouring of a hot syrup over a hot baklava. They gasp when he pours 600 mls of olive oil into his chocolate mousse and look sceptical when he says that dough for kourambiedes and the melomakarona needs to be weighed at 30 gms for consistency. They don’t take notes. They let their smart phones do the work.

The end of the masterclass sees a mad rush towards the kitchen bench. Georgia lines up beaming, mobile phone in hand, waiting with anticipation, to confess to Stelios that she is his biggest fan, that she uses his recipes all the time, that she watches his television show, and that she has a subscription to his magazine. However Parliaros is encircled by the Real Greek Australian Housewives of Doncaster with their Bling! Bling! Bling! who line up in various permutations to take photographs on their smartphones, excited to be in the presence of an esteemed pastry chef and television celebrity.

I speak with him briefly after the masterclass and he expresses his surprise at the level of recognition he enjoys amongst Greeks in Australia. He disavows the hoopla associated with being a celebrity chef and reminds me he is a zacharoplastis (pastry chef) and that he didn’t become a pastry chef to become a celebrity. 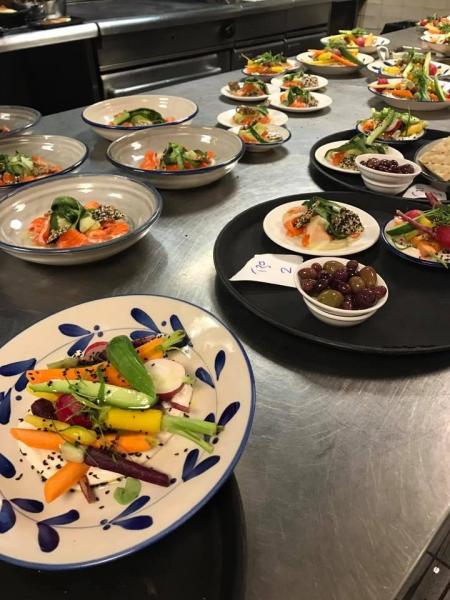 Mark, Madeleine and Keith are my company for the night. Mark and Madeleine are having a date night without their two teenage children. Keith is a quiet but awkward mathematician. He worked in universities but now combines semi-retirement, occasional consulting work in higher education with periodic travel to New York. We don’t know each other at the outset but after shots of Barbayianni ouzo, eight dishes and several glasses of Kir Yianni’s Paranga red and white wines, we become Facebook friends and promise each other to stay in touch.

Over the course of four hours we work our way through eight dishes which are on the menu. The menu follows a classic four course structure: entrees, seafood, meat and dessert. Three of the guest chefs from Greece and the USA design a course each and their dishes present a different approach.

Polychronis Damalas, the ‘RedFoo’ lookalike with funky glasses, showcases his novel fusion of Greek and Japanese influences in the entrees. The loud and sassy New Yorker via Athens, Maria Loi, includes a Cycladic classic which combines seafood and a pulse. Yiannis Baxevanis, who exudes the happy contentment of your favourite middle-aged uncle, takes a middle-eastern approach to serving lamb. George
Calombaris deconstructs traditional Greek sweets and reassembles them with a contemporary twist. We eat, drink and swap notes on the dishes. We each take turns to serve each other food and to ensure that nobody misses on their portion of a dish. We talk about the things that people who meet each other for the first time talk about – work, holidays, children, travel and families. Towards the end of our time together, with eight dishes come and gone, we start ranking our dishes. We all agree that our favourite course was the entrees. 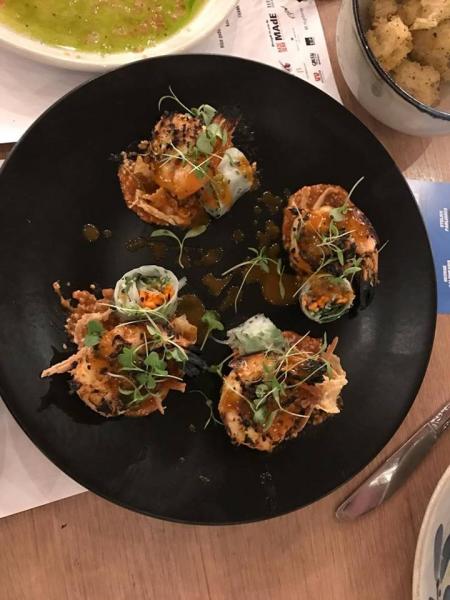 While Madeleine, Keith and I rave about the kingfish dressed with wild scampi roe, lemon, passion fruit and olive oil and Mark ranks the mussel congee with its briny mussels and dill infused avgolemono stock highest. I am the only one who likes the subtle combination of tender boiled octopus on a bed of fava topped with caramelised onions but agree that it could have done with a touch of olive oil and splash of lemon or vinegar.

We all agree that the pastourma spiced lamb rack served with artichoke, a sweet garlic sauce, crushed wheat and a baked splice of orange is interesting but underwhelming. The dessert course of a date stuffed kourambie, the lemon curd loukoumades and the slivers of baked phyllo pastry baklava sprinkled with cardamon and crushed almond was rated highly. We love the deconstructed rizogalo. The rice pudding, malted milk sorbet, small cubes of coffee infused loukoumi and puffed rice is visually appealing and a perfect combination of taste and texture.

As the time passes the Greek music starts to get louder, the groups of couples and friends start to make their way home and the wait staff clear the tables. Keith has already gone home. Mark, Madeleine and I farewell each other with a hand shake, a hug, a thank you for the company and the promise of staying in touch. 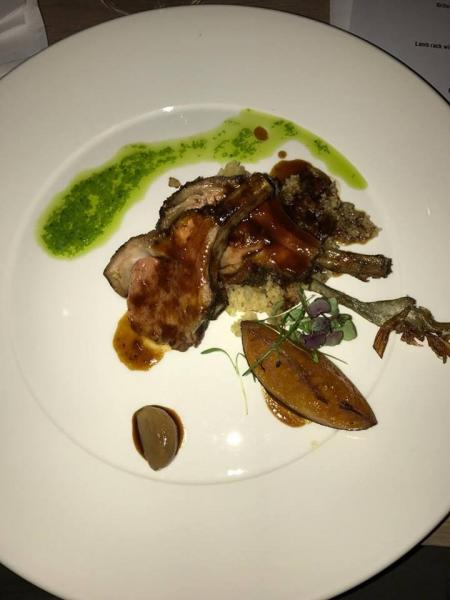 Part Three – Why this all matters

George Calombaris and Oh My Greek Week are important. Who else would be able to pull together a suburban couple on a date night, two local cook book writers, a retired mathematician and the Real Greek Australian Housewives of Doncaster with their Bling! Bling! Bling! to an event? Who else champions excellence in Greek cuisine by spending time in Greece with leading chefs Christoforos Peskias, Georgianna Hiliadaki, Yiannis Baxevanis, Polychronis Damalas and Stelios Parliaros? Who else facilitates culinary exchange by bringing these chefs out to Australia and having them work with his staff? Who else allows us as diners to meet these chefs and to experience their food? These contacts are important because they create a new cohort of chefs and consumers who experience and support the emergence of a contemporary, sophisticated Greek cuisine, both here in Australia and Greece.

These exchanges also generate a new form of culinary dialogue in which both chefs and consumers across Greece, Australia, the United States, Canada and the United Kingdom are actively shaping a new framework for a modern Greek cuisine.

Who else has given us Greek Australians contemporary dining experiences which we value and trust because it represents who we are? Walking into Hellenic Republic or Gazi or Jimmy Grants provides those of us who are forward thinking, outward looking, socially mobile and culturally plural with a space we can go into where we feel comfortable. We instinctively respond to eating at these establishments because we know that the food presentation, the food service and the interior decoration are as contemporary and as adventurous in approach as we are.

Who else acts as a benchmark for Greek cuisine in Australia? There is a chain of younger cooks and chefs setting up new establishments whose menus are responses to the lead that Calombaris has set. They try to follow his formula but do not possess his culinary knowledge and business acumen. We also see established mid-career chefs, who were doing contemporary Greek prior to him, acknowledge how his presence and support has helped them lift their game and created new momentum and new opportunities for them to establish flagship restaurants.

This is why the continued success of Calombaris and Oh My Greek Week are important. 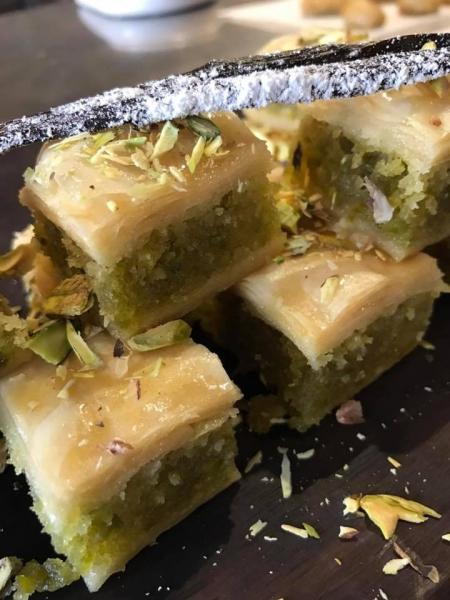