Food has become an increasingly common feature of contemporary cinema, as evidenced by the three food films in the Greek Film Festival program 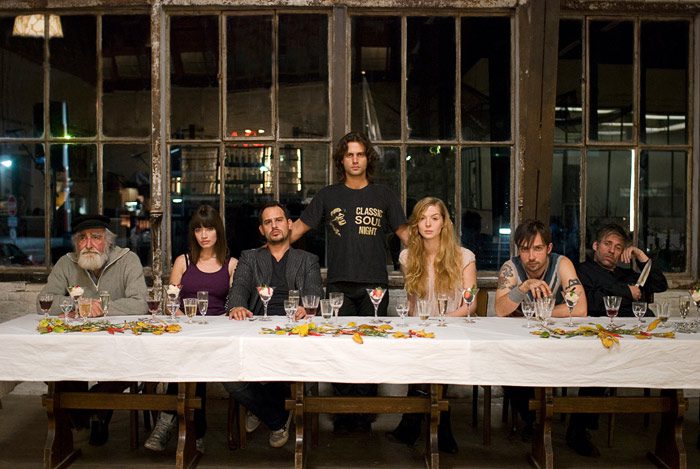 World cinema has had a preoccupation with food in recent decades. From the decadent over-indulgence of the French film Le Grande Bouffe, where a group of men hire prostitutes and go to a villa in the countryside to engage in group sex and eat themselves to death, to the dinner of a lifetime in Babette’s Feast, film has become increasingly preoccupied with food.

As evidence, consider the following: Big Night, with its story about two Italian brothers running a less than successful restaurant and their romantic entanglenments; Like Water for Chocolate, and its strong theme of food imbued with love; the cooking-obsessed rat in the animated feature Ratatouille; and Julie & Julia, the story of legendary cookbook writer Julia Child’s start in the cooking profession intertwined with blogger Julie Powell’s 2002 challenge to cook all the recipes in Child’s first book.

My personal favourite is the 1987 Japanese Tampopo, which is described on the Internet Movie Database as a “humorous paean to the joys of food.

The main story is about trucker Goro who rides into town like a modern Shane to help Tampopo set up the perfect fast-food noodle restaurant.

Woven into this main story are a number of smaller stories about the importance of food, ranging from a gangster who mixes hot sex with food to an old lady terrorising a shopkeeper by compulsive squeezing of his wares.”

We have also seen a rash of documentaries about food which have been screened in cinemas and have fed off the anxieties people have felt about the links between industrial agricultural production, the fast food industry and obesity. These include Food Inc., Supersize Me, Food Fight and Dirt: The Movie.

Greek cinema has not resisted the trend to address food in film, as we have seen in recent Greek Film Festivals in Melbourne and Sydney.

Who can forget the visually sumptuous A Touch of Spice from 2004, and its delicately handled story about a spice-obsessed Greek professor’s journey to adulthood which mixes food, history and family ties very palatably and poetically.

Or my particular favourite, Like Chef Like God, which light-heartedly charts a young man’s developing obsession with cooking and the temptations of the flesh.

So it is no surprise that the 2010 Greek Film Festival features three films which have strong food themes.

Dangerous Cooking, which stars A Touch of Spice star, George Corraface, is about a battle between an older chef and a younger man for the affections of the gorgeous Nena, played by Katia Zygouli, wife of Sakis Rouvas.

The film is a light romantic comedy which focuses on the aphrodisiacal qualities of food.

Canteen is a series of quirky vignettes centred around a mobile canteen at a truck stop on a coastal road.

The first feature film by experienced documentary maker Stavros Kaplanidis features a series of interconnected vignettes, which are in turn funny, touching, humorous and melancholy.

Greek magazine Athinorama describes the movie as being “simple, affectionate and full of authentic images of Greek everyday life.”

The most intruiging of the three films with a food theme is Soul Kitchen, directed by German Turkish film director Fatih Akin.

Akin is best known for his moves Edge of Heavan and Head On which have been strong dramas involving characters of Turkish descent living in Germany and focusing on how they define their homes and their roles.

However, Akin’s latest movie is a much more funky and contemporary comedy about the young Greek owner of a restaurant plagued by problems.

His girlfriend Nadine has moved to Shanghai, his Soul Kitchen customers are boycotting the new gourmet chef, and he’s having back trouble.

Things start looking up when the hip crowd embraces his revamped culinary concept, but that doesn’t mend Zinos’ broken heart. He decides to fly to China for Nadine, leaving the restaurant in the hands of his unreliable ex-con brother Illias.

Both decisions turn out disasterous: Illias gambles away the restaurant to a shady real estate agent and Nadine has found a new lover! But brothers Zinos and Illias still have one last chance to get Soul Kitchen back, if they can stop arguing and work together as a team.

Soul Kitchen is a light-hearted romp about sex and food with idiosyncratic characters, a great funky soundtrack and a whole lot of laughs.

It’s no wonder the At The Movies crew describe the film as being “cheerful, wild, colourful and sometimes a little silly, but it’s thoroughly enjoyable”.

For information on when these films screen as part of the Greek Film Festival see:
www.greekfilmfestival.com.au