Honey from a Weed

A classic English cookbook about the food of the Mediterranean revealed. 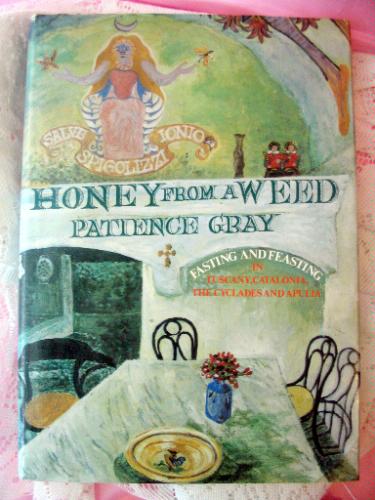 Patience Gray. Honey from a Weed.

Anybody interested in a different take on Greek food should read Honey From A Weed: Fasting and Feasting in Tuscany, Catalonia, the Cyclades and Apulia by the wonderful English food writer, Patience Gray.

I was first introduced to the book by Tim White, owner of Books For Cooks in Fitzroy, who knowing of my interest in quality food writing (as distinct from cookbooks) urged me to read the work because of it’s unique take on the food of the Mediterranean and Gray’s stylish writing.  And he was right on both counts.

Honey from a Weed  is both a cook book and a travelogue. The Independent described the book as being ” an “autobiographical cookbook” that told of her back-to-the-earth life with Norman Mommens, and their wanderings around the Mediterranean in search of stone and marble for his sculptures.”

It is a book about peasant food, whose many ingredients could only be procured by foraging.

In her foreword to the book Patience Gray wrote “The theme that binds this book together is not just the pursuit of the marble and the stone, but its location on limestone in the Mediterranean world, Italian, Greek and Catalan, a world rooted in the cultivation of the olive and the vine.”

First published in 1986, Honey From A Weed captures a rural world in which frugality rules. It is a world according to Patience Gray where “‘Home made bread rubbed with garlic and sprinkled with olive oil shared – with a flask of wine – between working people , can be more convivial than any feast.”

Interwoven through the book, amongst the stories and recipes and reminiscences based on her time in Apulia in southern Italy, in Tuscany and Veneto in northern Italy and in Catalonia in northern Spain, are anecdotes about the time Gray and her partner – referred to as The Sculptor in the book – spent in Naxos and the food that they ate.

She describes how locals finish work in the summer and head to a spot by the sea where they smash open sea urchins with a knife or stone and enjoy their succulent organ ovaries by dipping the bread into the shells.

Gray also describes the pleasures of being offered delicacies such as the fried spleen of goat or the grilled skull of the small bird.

Each entry is accompanied by a story, a fact, a historical reflection or a comparison.

The anecdote driven structure of Honey From A Weed serves Gray well because it provides her with a loose structure for sharing her sharp and succinct insights into her experiences with the reader.

So it is no surprise that in 2006 Stephanie Alexander declared Honey From A Weed a book she treasures because, “it is, above all, a treasure chest of stories about people, places and flavours that can be dipped into for a lifetime. The physical world Gray describes has largely vanished but the insights and recipes are as current today as ever.”