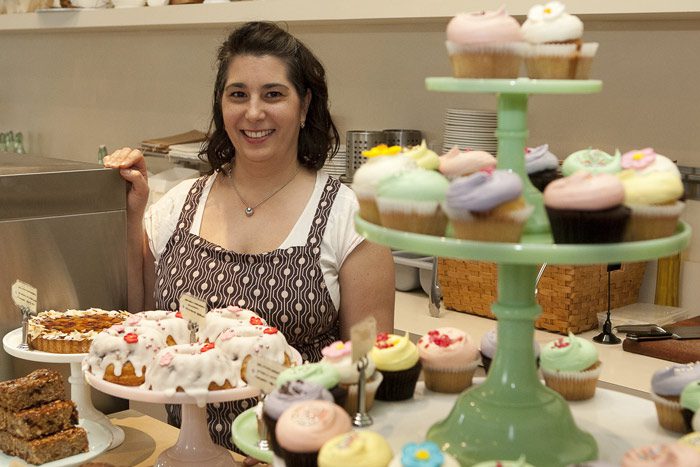 In an alternative universe Zoi Condous from the cafe Sweet Source in Carlton would not be a pastry chef. She would be a photographer, a set designer or a makeup artist in theatre.

From the day we opened, everybody wanted savouries and that has kind of taken over. The cafe has taken over. I still do quite a few wedding cakes and special occasion cakes but they are secondary things –
Zoi Condous

However, in this universe she is one of a small but growing number of pastry chefs who are branching out from restaurants and are setting up their own ventures.

Think Phillipa Sibley and what she is doing at Il Fornaio in St Kilda or Christopher The’s Black Star Pastry in Newtown.

Zoi Condous can stand confidently next to Sibley and The as a pastry chef of the highest order.

Sweet Source on Rathdowne Street in Carlton is one of those magical places where you can enjoy a sweet or a savoury pastry that is exemplary in flavour and in execution.

While it is located in a local shopping strip where cafes abound, Sweet Source is always busy with locals and people in the know. They go there to have a bite to eat and to enjoy great coffee brewed by Zoe’s partner Matt with beans from Coffee Supreme.

The cafe is small, airy and full of natural light and exudes an old world rusticness. There are old copper pots and saucepans, and classic teacups and saucers scattered on a shelf among cookbooks, jars of lemon, cumquat, lime and seville orange jams and marmalades, and a sign that reads ‘larder’.

The menu this week balances a mixture of old world and new world sweet and savoury pastries.

On the one hand, the old world was represented by a linzer torte, a spinach, fetta and leek tortilla, a smoked cod pie, and a raspberry frangipane and a banana frangipane.

On the other hand, the new world is represented by the pork and molasses flavoured Boston baked beans served on toast with avocado, blueberry muffins, a quesadilla filled with mole chicken and black beans and a breakfast burrito filled with beans, scrambled eggs and cheddar.

The menu is kept tight and structured but changes from day to day and week to week.

The same is also true for her sweet pastries. “I also have two sweet tarts, two sweet pies, three different sorts of cake. But the flavours always change,” she said.

I assume there is a system or process behind her decision making about changes to flavours and ingredients.
“Whatever is in season and whatever I feel like cooking,” she says when asked.

I am surprised by the role serendipity plays in her menu choices.

“I look in my fridge and see what I have ordered for the week,” she said.

The irony is that when Condous set up Sweet Source four and a half years ago she did not intend to run a cafe. She loved the location because “it has a very comfortable, relaxed, villagey feel which is not very pretentious.”

Her intention was to set up a shop which would specialise in wedding cakes and serve coffee and cakes on the side.

She laughed as she recounted: “From the day we opened, everybody wanted savouries and that has kind of taken over. The cafe has taken over. I still do quite a few wedding cakes and special occasion cakes but they are secondary things.”

It is no surprise that Condous is doing so well given that she brings substantial experience to the table.

She completed her apprenticeship as a chef at the Hyatt, worked with leading Melbourne cake maker Loretta Sartori at Distorta Designer Cakes, studied pastry at the highly regarded French Culinary Institute in New York, had stints working with San Francisco pastry guru Emily Luchetti at Farallon, at New York’s Union Square Cafe and as the executive pastry chef at London’s celebrity hangout Restaurant 192.

Upon her return to Australia she also enjoyed a stint as the pastry chef at Melbourne’s Richmond Hill Cafe and Larder.

Condous is clear about what she has learnt along the way: from Loretta Sartori the technical knowledge and skills to know when something is right; from Emily Luccheti to create simple dishes with fresh ingredients of the best quality; from Union Square Cafe the execution of skills and technique when dealing with high volumes; and from Restaurant 192 the pleasures of being creative.

However, the reality is that Condous has always loved cooking and baking. She drew inspiration from both the Greek and Australian sides of her family. Her maternal grandmother ‘always baked beautiful fruit cakes’, according to Condous, and her paternal yiayia on the island of Lesvos was always cooking massive feasts and traditional Greek biscuits whenever they would visit.

Her mother learnt to cook from Di Holuigue at The French Kitchen in Armadale and subsequently set up her own catering company and cooking school while her paternal aunt ran a Greek restaurant on Johnson Street. So food was a passion on both sides of the family.

However that passion become a profession when she finished high school. All she knew at the time was that she did not want to go to university and wanted to do something artistic or creative. Her mother suggested she try a cooking apprenticeship.

“From the first day in the kitchen it was ‘I really like this’.”

Given her Greek heritage and her visits to Greece we discuss what she enjoys about her trips to Lesvos. She loves the tranquility of the village, the large family gatherings and the accompanying family feasts, and the rustic nature of village life; a life where a truck comes around and sells fruit and vegetables twice a week and bread every day.

Layer cakes with their four layers and fillings are her favourite to make because they are voluptuous to look at and remind her of the excesses and decadence of New York.