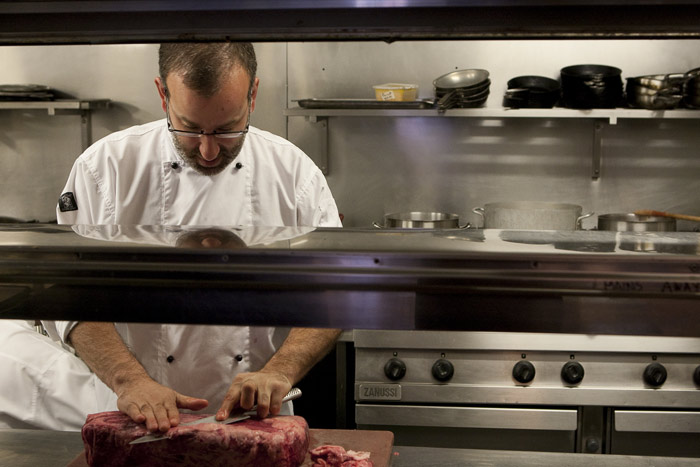 Vas Donoudis in the kitchen at Church Street Enoteca.

Sitting opposite Vas Donoudis you would find it hard to believe he is one of the few Greek chefs in Melbourne who works in a hatted restaurant.

While Donoudis is being photographed he assiduously trims the fat off a large slab of meat with short and precise movements of the knife.

He is not hyperagitated like a Gordon Ramsay or a pucker Londoner like Jamie Oliver nor is he a happy cheerful words-a-minute type of chef like Curtis Stone or Tobie Puttock.
Vas is relaxed, considered and measured.

When I turn up at Church Street Enoteca on a Monday morning he is at the bar waiting for me. His manner is warm and friendly and before you know it we are sitting down, sipping on a coffee and chatting.

Church Street Enoteca in Richmond is in a funny spot, situated as it is in the furniture, offices and cafe section of Church Street.

However it has earned a fine reputation as a place to enjoy modern Italian with a French edge under its former head chef, Ron O’Bryan, and it has proved popular with the South Yarra suits and Richmond gentry.

Vas Donoudis has maintained the restaurant’s reputation by honing the menu and giving it a much stronger regional Italian focus. He has drawn on his years of experience working in Italian restaurants in Melbourne and Sydney – Pendolinos in Sydney and at Cicciolinas and the Dog Bar in Melbourne – to frame a menu which emphasises flavour and simplicity.

The menu presents Italian classics with an enticing modern twist.

The Tuscan classic bistecca fiorentina is a char grilled t bone served with a pecorino infused potato mash and a freshly made Chianti mustard.

The ravioli is stuffed with quail and served with broad beans, a blood orange sauce and crisp prosciutto.

The risotto is a flavoursome combination of olive oil braised globe artichokes, broad beans and mint.

He is a fervent believer in using the best quality ingredients and in letting the ingredients speak for themselves.

When asked to describe what he prepares, he responds with an anecdote: a good Italian chef always insists on a dish containing no more than three or four ingredients.

He illustrates the point by describing the making of his pumpkin and ricotta filled crescent shaped pansotti – think of a Ligurian stuffed pasta – which are dressed with a sage infused burn butter sauce and an amaretti garnish.

Donoudis insists that he works within the Italian culinary tradition and that he likes to add modern twists that do not compromise the basic premise of the dish. He insists he wants the flavours on the plate to speak for themselves.

The irony is that he never had a particular passion or interest in Italian food. He worked in a series of restaurants with a strong Italian influence. It wasn’t until he worked at Pendolinos in Sydney that he cultivated a serious interest in regional Italian cuisine.

The high level of his skills is borne out by the fact that under his stewardship, Church Street Enoteca has maintained its one hat rating in the latest Good Food Guide and that Pendolinos in the Strand Arcade in Sydney, where he was the executive chef, was also awarded a one hat rating by Sydney’s Good Food Guide.

You get a sense of his modesty when he points out that while he is proud of having led the kitchens in hatted restaurants, he is also aware that these ratings are subjective.

He adds that his biggest challenge is to get the kitchen and the front of house staff to maintain the high standards of service he expects.

Watching Donoudis in the kitchen as he prepares for lunch service is instructive. The four young chefs who work alongside him are busy preparing what will soon be offered to customers.

While Donoudis is being photographed he assiduously trims the fat off a large slab of meat with short and precise movements of the knife.

There is an economy to his movements and his words which belie the urgency of the work.

Once the photographer is finished he bids us farewell.

There is a civility to Donoudis which is the perfect accompaniment to his relaxed but refined approach to cooking.