Harry’s meat: a cut above the rest 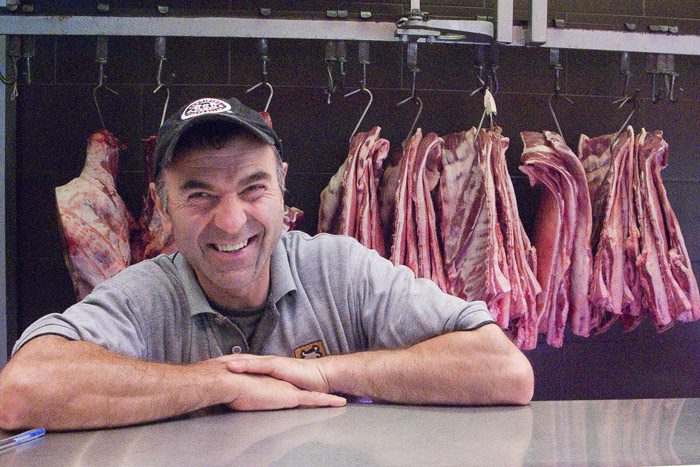 Harry Tsatsimas is a knock about bloke who loves his meat. He loves his meats so much that he has spent three decades working as a butcher at the Queen Victoria Markets.

It’s like everything else, you buy shoes from Target and shoes from Versace. The difference is quality. That’s the same with meat now.

In any week his family business sells around three tons of meat – a combination of beef, lamb and goat – to his retail customers and wholesale to restaurants around Melbourne.

The meat he sells is not the commonly available mass produced meat from Queensland sold cheaply in plastic trays for $10 and $20 at your butchers or local supermarket.

This is meat from superior breeds of cattle – Angus, Bos taurus and Australian wagyu crossbreeds – which meet Australian standards for premium meats.

Tsatsimas has a simple analogy to explain the difference: “It’s like everything else, you buy shoes from Target and shoes from Versace. The difference is quality. That’s the same with meat now. You can buy cheap meat at cheap prices. I buy expensive meat and sell it at a reasonable price. I am happy and the customer is happy.”

He explains that the difference between an everyday and premium piece of meat, say a porterhouse, is evident in the cooking.

Premium cuts of meat will be tender and will have a fuller flavour as a result of marbling (fat through the meat) and the meat having been aged for a week or more. The cheaper cuts will look good but will be chewy, Tsatsimas said.

The prevalence of cheaper beef in our supermarkets and butchers is being driven by economics, according to Tsatsimas.

“A lot of shops are bringing it down here because it is cheap because they are worried about profit margin,” he said. “What I’m most worried about is the customer being very happy with the meat.”

Tsatsimas has seen the business go through two major transitions in the last three decades. The first is in the way people buy meat and the second is in the type of meat they buy.

“Thirty years ago meat was cheap. People were buying trays of meat. ‘Give me the whole tray of t-bones. Give me a whole tray of chops. Give me that half a lamb and cut it for me,'” he explains. “Now it is a little and good. So one steak and a lot of veggies. Whereas before they would buy a whole tray to feed four people. They would eat like kings, like Romans,” Tsatsimas said laughing.

He attributes the changes to people’s changing lifestyle and the rising cost of meat.

“People watch their pockets because they need to watch what they are buying. People have smartened up.”

At the same time Tstatsimas has prospered from the increasing consumer interest in premium meats. This interest has been fuelled by the emergence of small producers willing to cultivate cattle for the premium meat market and restaurants that are willing to source premium meats and to credit the producers on their menus.

“These days people are going to the restaurants and paying high prices for meat. They’ve got to know where it is coming from and what kind of breed it is. They are paying top money and they have the right to know.”

As the Christmas festival season rolls out Tsatsimas is preparing to sell huge amounts of eye fillet and rib eye because that is the protein of choice for his customers.

He resorts to the butcher’s defence – I’m vegetarian – when asked what his favourite cut of meat is to eat. However he concedes that he loves rib eye or scotch fillet because the marbling in the meat means they have more flavour and cook better.