When lesser is better: Naxos and the lesser-known Cyclades of Greece

I had been assured, as the timetable indicated, that the last boat out of the secluded Kato Koufonisi without a hotel or rooms to rent, would depart at 10.30 pm. Greek time would dictate that it could be later; much later. Aside from hippies and camping, you only have goats and possibly the baboula for company if you are not on that boat.

At 10.20 pm I paid my bill at the only eatery on the island, Taverna Venetsanos, which is not powered by electricity, and said goodbye to the gents who ran the place. It is a two-minute walk to the tiny port – if you call it that – at Panagia beach. In the distance, I could see a small boat that had long departed.

With no accommodation and, worse still, no iPhone charger or wi-fi, I trudged sadly back to the taverna. The staff were puzzled to see me return. Explaining that the boat had taken off, they too had wanted me to take off and quickly called the Captain.

The Captain was at a taverna in Ano Koufonisi, some of his youngsters were in charge for the evening and may not be reachable on the boat due to the wind of Poseidon!

Fortunately, those at the taverna insisted and the Captain made a call to the boat. The staff on the boat then had a vote with the passengers on board, and they returned to pick me up. Not sure if I would have survived a night of camping, but I can tell you that the beach and coastline looked spectacular due to the fact that probably less than 100 people reside on the island.

The taverna is a must. Staff will treat you well, and the food is some of the best I have ever eaten; you can choose your dish not from the menu but from venturing inside and having a chat to the chef.

READ MORE: Yannos Kourayos brings Despotiko to life in revival of Greek antiquity in the Cyclades

Sometimes, less can be more. More beauty, more adventure, and more hospitality. Not everybody who gets to Greece will visit a smaller island, usually following the masses to Mykonos, Santorini, Crete or Lesvos.

The Cyclades are smack bang in the middle of the Aegean, and generate a vast amount of income during the tourist season. Yet nestled not too far from these busy nisia, one can find paradise with less people and slightly lesser prices than your bigger holiday destinations.

Starting in Naxos, though not technically one of the lesser-known Cyclades serving as the airport and ferry gateway to other islands, it is known for spots such as Agia Anna, and has a winter population of about 7,000 people, which dwarfs the lesser-known Cyclades’ cumulative total of 965. As per usual, I found a small hotel not far from the main drag and hired a scooter that was meant to work safely to take me across the island. A couple of hairy moments (and I do have a hairy chest) on mountain bends later, I returned to Chora. With the back wheel and brakes reminding me of a skidding Formula 1 car, I found it amusing that I had to beg the owner of the rental to take it back as he felt it was safe… Until he tested it and almost fell off.

Naxos has grown since I was last there in 2002, with an increase in residents and visitors, more beach bars have popped up.

Crossing over from Naxos on a slow boat that allowed me to top up my tan for about an hour, I reached Iraklia island. No, this is not a city in Crete, for few people come here or know of it – and those that do will appreciate how quiet it is.

Looking for a scooter to rent or a Harley Davidson, whichever came first, the kid from the hotel drove me back to the town, all 100 metres away to what is the post office. The post office is also the supermarket, the one scooter rental place, the petrol station via the small bottles they use to fill up your tank, a coffee shop and the travel agent. I did not ask if it was the police station as well, though I have a feeling it could be.

The scooter was a gem, probably one from before I was born, which qualifies as a classic, taking me to the remote parts of the island. Paradise is possibly one way of describing Iraklia, treasure is another. The water that surrounds the island is crystal clear to aqua. I counted two villages and six tavernakia all up, and a population of 200, though I am told there are significantly less once tourist season finishes.

For photographers or those on a honeymoon, I cannot recommend a visit to the island enough. It has that typical community friendliness and warmth that outsiders will appreciate and while there is a bus, everything is walking distance and down the hill. The view is worth the huffing and puffing for those, like me, needing to rediscover the term fitness. Significantly for me, the wi-fi was better here than anywhere in the Cyclades this summer.

From the port/beach of the island I next made the journey to Koufonisia.

As had been the norm during my trip to the lesser-known Cyclades, there was little to no fanfare for the election. In fact, being Election Day, the youth were intent on working their 12 hour shifts and then going out, rather than voting. There was no discernible voting booth anyway.

There were reasonably large numbers of visitors which starts at the picturesque port littered with dozens of boats and yachts and ends being a swimmable beach. It is here that you can catch a caique to Kato Koufonisi, just make sure the boat takes you back!

READ MORE: The diary of a digital nomad

Again, almost everything is within walking distance. There are no rental companies for scooters or vehicles, but there are plenty of busses and caique connections to visit other areas of the 26 square km island, or simply hire a bicycle. I hadn’t ridden one for years and with my body weight, I hired and then quickly returned the mountain bike as I was menace to myself – and possibly the fish, that’s how unstable I am riding one of these.

Chora has an abundance of shops, eateries, barakia and things to do and hosts the bulk of the 400 island populace. Walk out of town on either side and you will find the odd hidden restaurant that is usually packed in the evening, affording you a nice ocean view. I linked in with a Captain from the hotel I stayed at, a man from Piraeus, to take me out to Keros island. Aside from it being a windy day, which played havoc with head and chest hair, it was great to be allowed to commandeer the boat and drive it. Something I hadn’t done much of since I was rescued from a sinking houseboat a while back! Keros has no current residents and is just a few minutes from Ano Koufonisi, with two small beach bays for possible docking. There is a farmhouse located on the island. Nature, wildlife and the neighbouring Glaronisi are what you can look out for, which has a few small caves that you can just about drive into with a small boat. On a day with waves however, probably not a good idea.

Next up, I took the ferry for a day trip, this time to the small Schinoussa island, with its port doubling up as a basketball and football pitch, a terrific beach and hosting two tavernakia; though both places found it hard to welcome someone who simply wanted to sit in the sun. So I was rather glad to sweat hard for a kilometre walk up the hill to find a scooter rental company on a small farm. I later discovered a path you can take which would have saved me from some of the sweating. 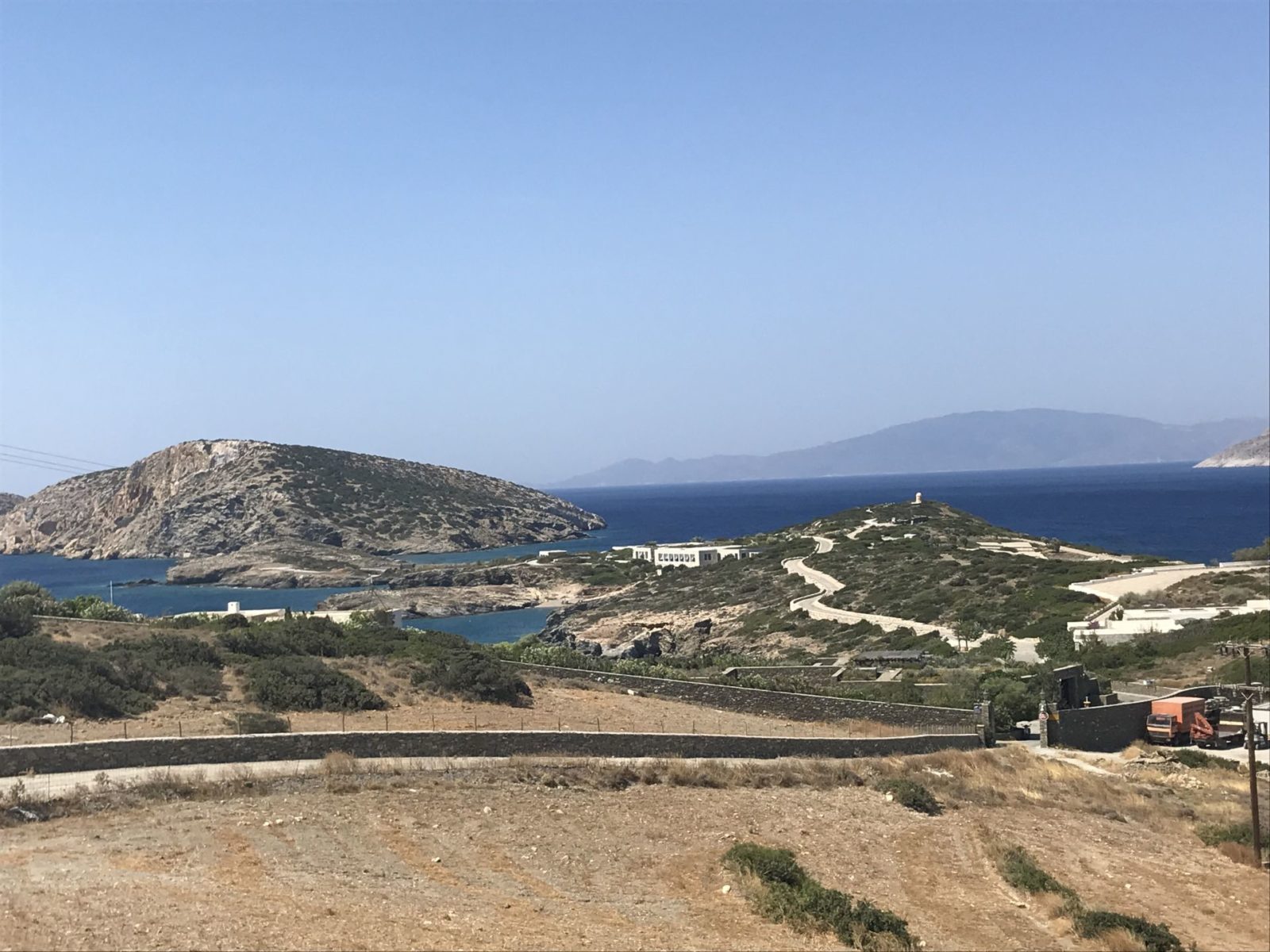 The remote island of Schinoussa is in the Cyclades archipelago. The wind may not have been kind, but the stunning scenery was. The eight km coastline of this small island is as beautiful as the other gems, and with a small population of just 260 people, you know it will be relaxing. The biggest village is set along the main road up the hill from the port and has an array of barakia and shops – a really nice way to spend the day or evening.

The only ‘significant’ island that I did not visit on this trip, as I am saving it for another year, was Donousa which will take the number of Greek islands I have visited to 80.

With many amazing places to visit in Greece, the best kept secret may actually be the lesser-known Cyclades. Perhaps the less that know about paradise the better.

* Billy Cotsis is the author of ‘From Pyrrhus to Cyprus Forgotten and Remembered Hellenic Kingdoms, Territories, Entities & a Fiefdom’.