Through the prism of the pool, Christos Tsiolkas’ latest project seeks to tell Australia’s history 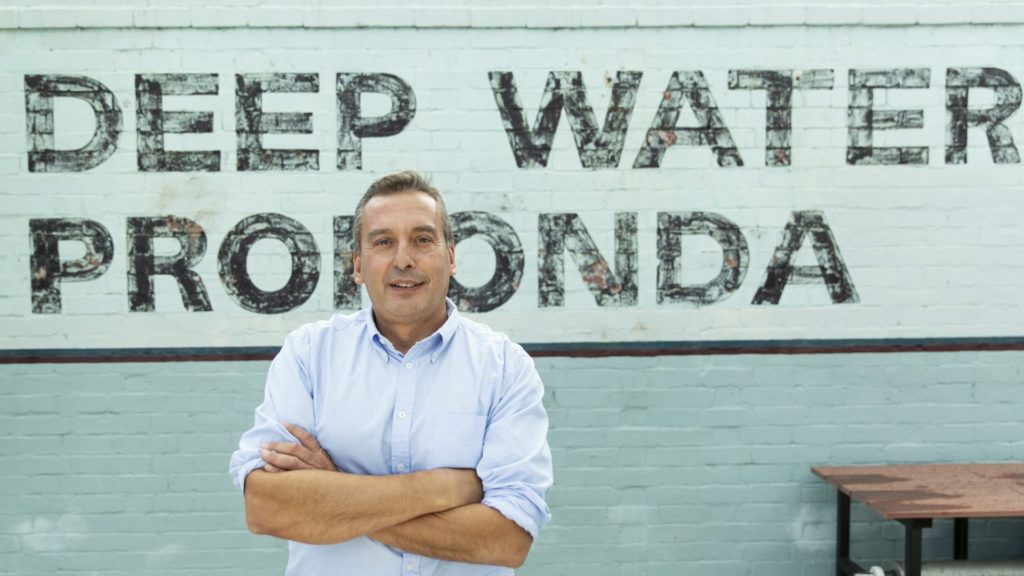 Christos Tsiolkas at the Fitzroy Pool in front of the ‘Aqua Profonda’ sign. Photo: Supplied

When we each think about the swimming pool, as Australians we all have some memory, be it be positive or negative.

For Christos Tsiolkas, the pool was a place where the division between him being Greek and being Australian started to unfold. His parents hailing from the mountains of rural Greece didn’t know how to swim, and so with their son learning to swim a separation commenced.

“We all have our personal, individual stories of the pool, but it is also a story that belongs to all of us as Australians,” Tsiolkas explains. “We have different perceptions of it depending on where we come from; whether we’re First Nation, whether we’re from the original Anglo Saxon Celtic people, or whether we are from those increasing waves of immigration that have formed this country.”

It is through these collective memories and nostalgia that The Pool, a new two-part documentary series co-written by Christos Tsiolkas, explores Australian identity.

He was approached by producer Dan Goldberg after being interviewed for an installation titled ‘The Pool’ in the Australian pavilion of the Biennale in Venice in 2016 – he was the perfect candidate for the job – and once Sally Aitkin came on board as director, Tsiolkas says “sorry to use a cliché metaphor – it felt like yeah, I’m happy to take a leap”.

He admits he was initially tentative, wondering how much there was to actually say about the subject matter, but he quickly found that with Australia boasting more than 100 ocean pools, more than 1,000 public pools and more than one million backyard pools – going all the way back to the ancient history of the billabong, there was a fair bit to unpack.

What they found was that aside from being a place of leisure, the pool was the setting for many untold stories of community, as well as having been a battleground for feminism, racism and sexuality. Which is why the doco is presented in two parts: Our Playground – the elements of fun and pleasure, and The Battleground.

“What anchors that second part is those stories that I think should be more known, like the battle in the 60s in the Moree Pool in outback Australia where Aboriginal people weren’t allowed to swim. Then there was the freedom riot, [for which] Charles Perkins was the driving force, that actually changed laws in this country. When I was a young kid I had heard everything about the Civil Rights movement in America, but I didn’t know that story, and I was like this is a story I want to tell,” says Tsiolkas.

Another one of his favourite stories in The Pool, one that is rather close to home given its post-war migration connection, is that of the ‘Aqua Profonda’ sign inscribed on the brick wall at the Fitzroy Pools in the 1950s in his hometown of Melbourne.

“It was an Australian man, an Anglo man, who as the inner suburbs of Melbourne were becoming more and more migrant with lots of Italians living in Fitzroy, was concerned that people, young kids, from those backgrounds would be drowning. So he took it upon himself to write the words ‘Deep Water’ in Italian. But because he wasn’t Italian and because they didn’t have Google back then,” Tsiolkas laughs, “he misspelt the word ‘Acqua’, he lost the C.

“I think there’s something really beautiful in that story; it says a lot about our history. I don’t think the series flinches from that, that there is a history of racism that you have to take into account whenever you talk about Australia, but there’s also an importance to remember that moment of kindness by that man.”

That kindness is something that continues to this day, with many council pools holding swimming lessons specifically for new migrants, “an ongoing project,” as Tsiolkas describes it, “that in a way learning to swim is a part of becoming Australian”.

On the other hand, the pool has also played a big role as the playground; a place that is both private and public where people whether straight or queer, could, put simply, look at bodies other than their own.

“In the documentary Dennis Altman speaks really eloquently of the hidden gay history of the pool as well. It’s kind of a subterranean layer there that the pool long before apps and the phone was a way of people from outside sexual communities being able to meet.”

This was in part the case for Tsiolkas. While the division between himself and his heritage started to grow with that first swimming lesson, it was also at the pool that as an adolescent he started to suddenly become aware of his sexuality. As he began to question his place in the world, the water was a way to escape.

“There was something in swimming laps that took me out of the world; I always have loved that aspect of swimming,” he says, and is something he continues, now 53, at his inner-north local.