28 October anniversary in the Antipodes: Is it upside down or the right way up? When I moved to Greece from Australia, I remember feeling very lucky that I could finally embrace my culture at ‘home’.

But the celebration of Greekness in the homeland soon turned to disappointment as the anniversaries and holidays that once meant the continuation of our culture, lost some of their lustre and importance in the place where they were born. Sometimes they were even ridiculed and called redundant by those who felt that you do not need to do anything to show that you are Greek when it is taken for granted that this is what you are.

The school march, for instance, an excuse for national pride in Sydney, seemed to have fallen wayward in Greece.

Instead of honouring fallen heroes, it was turned into a media circus with a new trumped up topic of contention each year from whether the students were right to do the Monty Python walk; or whether the skirts were too short that year; or whether such events are nationalistic and anachronistic; and whether Albanian students whose ancestors fought with Greek soldiers should be allowed to be flag bearers – an honour reserved for the best student in the class.

At the Hellenic Memorial near the Shrine of Remembrance on Monday – surrounded by Oakleigh Grammar and St John’s College Preston students, Hellenic RSL veterans from Korea, Vietnam, Somalia, East Timor, the Middle East, Soloman Islands and Afghanistan and more – I could not help but recall the simple 28 October events of my childhood and how they taught me not to be afraid to celebrate my heritage and to take pride in the history of my country. And I wondered what the same anniversaries meant to my own children, raised as Greeks in Greece.

In my daughter’s Nea Smyrni classroom, I remember feeling teary-eyed upon seeing kindergarteners belt out the Greek national anthem with gusto while waving little hand-made Greek flags, even though their names were Xavier, Eldina, Sylvia, Marie-Claire, Ahmed and the like.

It was not lost on me that, in the Antipodes, pupils of all ethnicities join their voices together in singing ‘Advance Australia Fair’ and seeing these children of diverse backgrounds sharing their love for Greece filled me with hope until a mother of one of the classmates whispered in my ear, “Look, we’re outnumbered, where are the Greeks?”

Then there were the 6th graders vying to be flag-bearers in a sport dipped with nasty epithets and school bullying, which sometimes resulted in parents getting involved to defend their children’s right to that honour, reserved for the top student in class.

But these battle cries were just a distant memory on Monday as I stood at the shrine, surrounded by migrants, soldiers, and others who knew what sacrifice means and understand the importance of recognising other people’s selflessness rather than use 28 October as an opportunity to brag. It was about love and unity, rather than about skirt length, hairstyles and other forms of meaningless debate. 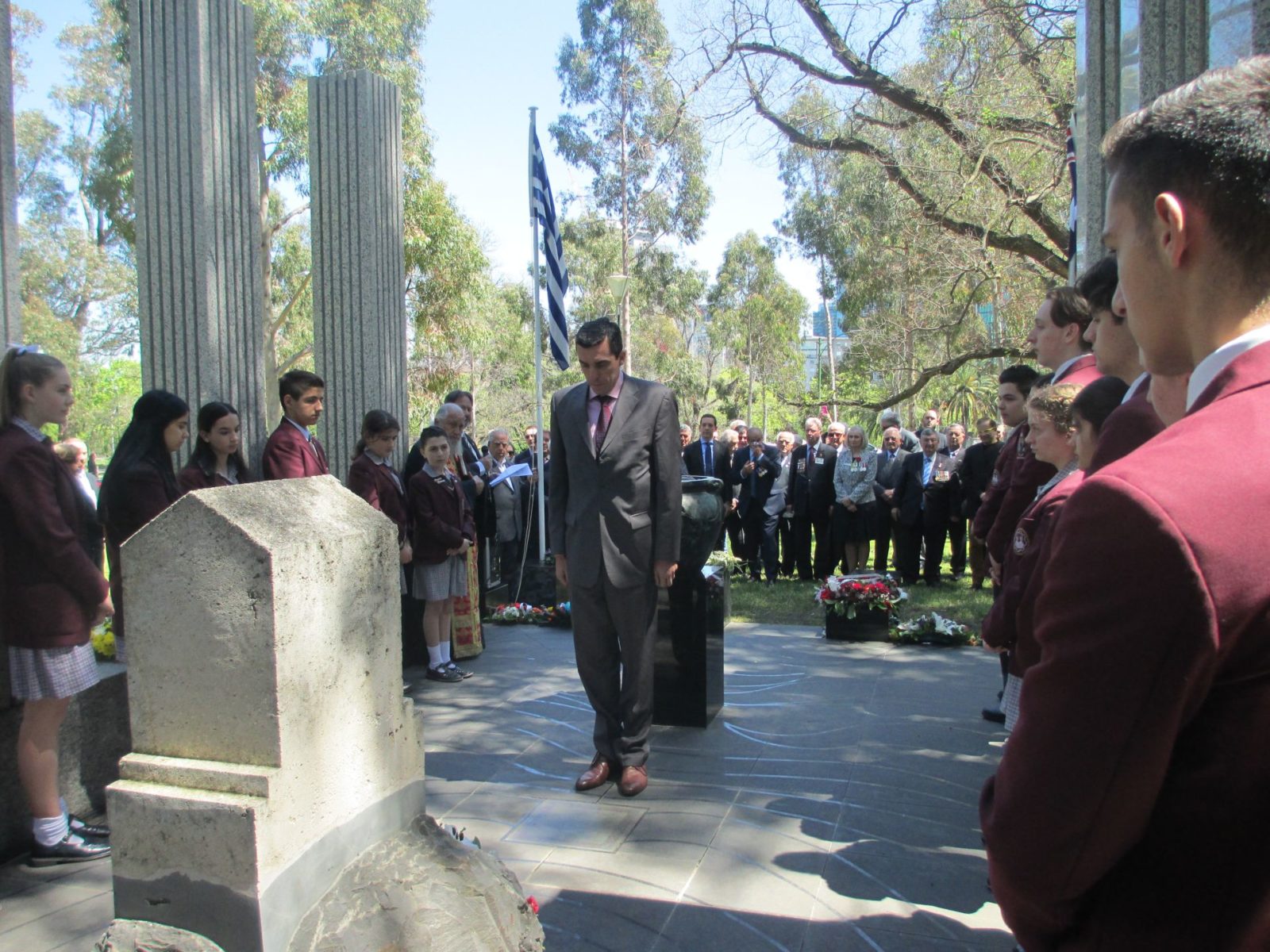 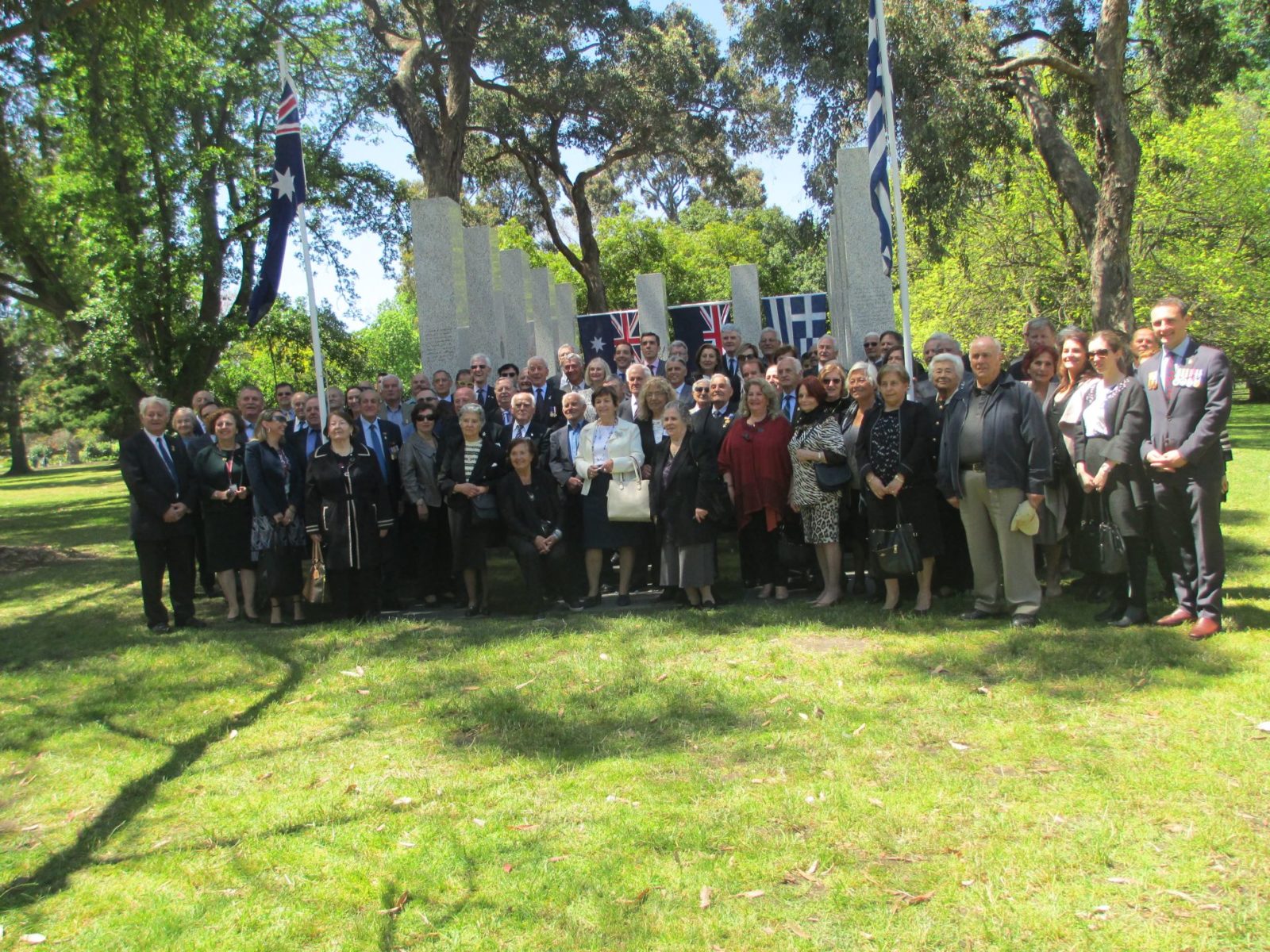 Greek Consul General Dimitrios Michalopoulos spoke about Ohi Day and how important it is to remember the servicemen for their offerings and sacrifice in WWII. He also pointed to the important role played by Australia’s allies, the ANZACs and the people of Greece that gave so much supporting the troops. Representatives from Victoria’s Government and from the Opposition, government bodies and Greek organisations laid 32 wreaths in honour of the fallen, and the stench of bloodshed was covered by the scent of optimism as a mountain of flowers rose.

It was 28 October in Spring, not Autumn – and Spring is always filled with freshness, new life and flutters of hope and a prayer for the fallen by Father Chris and Father Sinesios.

And that’s when I realised that I went to Greece hoping to raise kids who would be in touch with their heritage and love their country, but to be able to do that perhaps you need to live abroad; to be in a place where your heritage is not easily accessible. You need to be in a place of meaning, a place like the Hellenic Memorial near the Shrine of Remembrance.