Putting Greek desserts in the spotlight 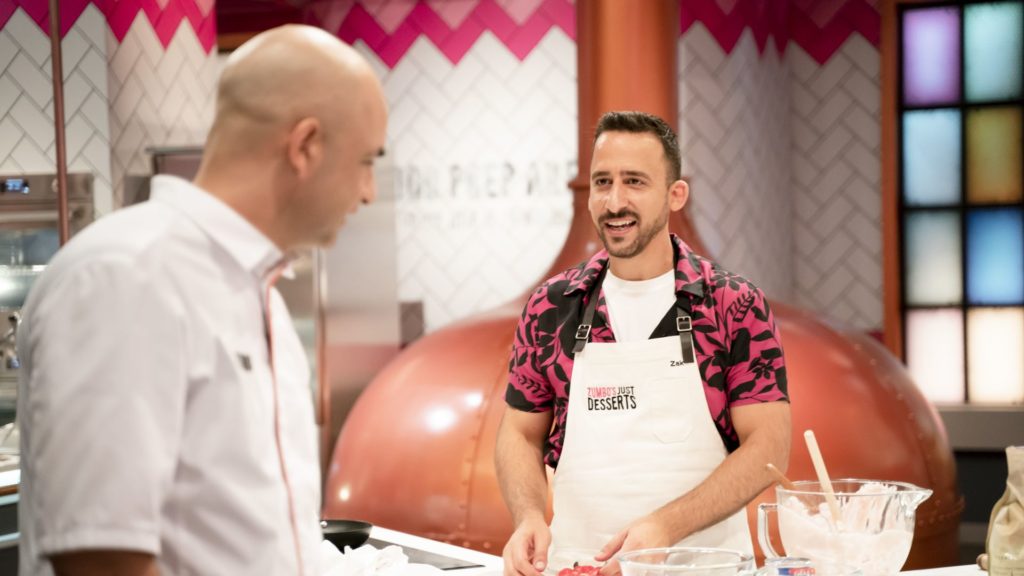 For those who enjoyed the first season of Zumbo’s Just Desserts in 2016, the wait is finally over for Season 2, airing on Channel 7 this weekend.

The dessert cooking competition, co-hosted by the master of sweets himself, Adriano Zumbo and acclaimed chef, Rachel Khoo, will see 10 contestants battle it out in the kitchen, with the last one standing taking home a prize of $100,000.

Among them is 39-year-old Greek Australian Zak Antoniou.

Based in Melbourne, he grew up surrounded by the aromas of Greek sweets.

“I’ve always loved making desserts,” Zak told Neos Kosmos. “Always watching my yiayia in the kitchen making things, instead of being outside playing, I would want to help her roll the melomakarona or kourabiedes.”

Zak studied Food Economics in high school, but his next steps led him into advertising and marketing.

“I just never thought food was an option. Also you know when you watch those TV shows of chefs and they’re always screaming and angry? It always frightened me a little bit,” he laughs.

But throughout the years, Zak never stopped cooking and honing his skills, especially when it comes to desserts. So when the opportunity came along to apply for the show, he couldn’t pass it up.

“That’s what pushed me to apply. Also, I wanted to show Australia Greek desserts, and put them on the spotlight,” he says.

Zak found out his application had been successful just three weeks before being flown to Sydney for filming, and during that time he set out up skilling himself, watching YouTube tutorials and making a new sweet treat each night.

“Desserts are very French influenced, but I wanted to bring something different; I wanted to incorporate my Greek desserts, but modernise them a little bit, to make something they may not have seen before. So I would ring mum up and say ‘how do I make the custard for the galaktoboureko?’ And then I’d try and change a bit of that flavour or add it into something different,” he says. “I’ve used flavours of mastiha and mahlepi in my recipes, which you’ll see on the show.”

A fan of Season 1, he admits it was a whole different experience to be on the other side of the screen, and says the pressure surprised him.

“I work in quite a high pressure job, but it’s such a different type of pressure,” he says.

“You’re under the pressure of a clock to get something prepared, present to the judges. If things don’t go to plan, it’s very stressful, and they’ve got cameras all over you. Plus you’re competing against other amazing dessert makers, so when you look around and see what they are plating up, you’ve got that sort of level; you either have to go bigger or better.

“Then with the Zumbo tests, if you’re in the elimination round, what you see [as the viewer] when they unveil the dessert, is when we first see it, and you freak out!”

When the first episode of Zumbo’s Just Desserts airs on Sunday night, it will be the first time Zak has seen himself on TV. He admits to being a little anxious, but it’s not about how he will be portrayed.

“It’s not that type of show; it’s very genuine in the way it will be edited. I’m just so passionate and I think that’s where my Greekness comes through,” he laughs. “I know there’s some instances where I get quite emotional. So you might see me do my Greek cross in one episode, you might see me cry a little bit, praying to God for something to work out.”

READ NEXT: Pomegranate fruit, the Greek elixir that France can’t get enough of

Since his first travels to Greece, Zak has dreamt of opening up a zaharoplasteio of his own in Melbourne, with a modern twist.

And he couldn’t have a better name for a lover of sweets.

“I registered a new brand, Zacary Desserts, because my name Zacharias has a reference to sugar and I thought it was a really good connection. So I’m working on that,” he reveals.

“My goal is to go to Greece next year to do a food tour, and check out some of these amazing Greek dessert shops to get more influence.”

Catch Zak on ‘Zumbo’s Just Desserts’, airing on Channel 7 on Sunday 17 December at 7.00 pm.
Follow Zak’s progress on the show via Instagram @Zak.JustDessertsAu