Diatribe: Theo-Fanya and moments of Epiphany at Port Melbourne In ways inexplicable, my attendance at the annual Theophania Festival at Port Melbourne determines the outcome of the rest of the year. I can attend the same ceremony in Frankston, or Rye or Rosebud, but these are no substitutes for being present at the primary blessing of our Melburnian waters. If, as this year, other obligations get in the way, then those obligations are speedily cast aside, for who knows how the year will turn out if my presence is there not made manifest?

A number of rituals accompany attending the Port Melbourne Theophania, the first of which is having a secret, convenient car parking spot that no one in Melbourne is privy to. It is a good idea to have a second back up secret car parking spot, if, as was the case this year, your last year’s brilliant find has in the meantime, turned into a Loading Zone. And be not jealous of the pensioners and senior citizens that have parked so close to the pier. They have been there since last night, and have camped out in order to obtain priority.

Then there is the ritual of the long walk along the sea to get to the pier. I pass the public toilet, which still has a sign painted in the sixties, in phonetic Greek “ANTRES,” this being a time before gender, but not alphabet dysphoria. As I proceed, passing Station Pier, invariably, I see older Greek-Australians point to that landmark and relate to their disinterested grandchildren, how they first set foot in Melbourne upon that very spot. Consequently, thousands of third generation Greek-Australians are possessed of the firm conviction that their ancestors arrived in Melbourne, from across the Tasman, on the Spirit of Tasmania.

Back in the times when the Blessing of the Waters was newsworthy, or during election years, the pier would team with reporters and politicians, both of Greek descent and the garden variety. This year, is not an election year and I missed being asked by stray MPs, for directions to the refreshments tent. I always, however, remember the time, years ago, when I was accosted by a rather anxious journalist, asking me if I could identify Mr Theo Fanya in the crowd and would he be willing to speak with her?

“See the tall man wearing a crown and sporting a beard? The one who is about to throw the cross in the water? That’s your man,” I told her.

I am convinced that the received pronunciation of our feast, as demonstrated by sundry newsreaders over the years, into standard Australian, has its origins in this singular conversation. Arriving at the pier and jostling my way through the crowd, I soon give up on trying to find a suitable spot from which to view the imminent competition. Instead, I do what all second generation Greek-Australians do: I hand over my progeny to their grandparents, trusting in their superior pathfinding skills to find a suitable vantage point. After all, I already know how the story ends and they are still agog with anticipation.

Attempts to secure a position in the shade or a plastic chair are fruitless. They have been in the possession, custody and power of ever resourceful yiayiades since the early morning. There they sit, Woolworths supermarket bags placed proprietarily upon the trestle table, a veritable apostrophe of possession. This is the land of Terra Nullius, a legal concept which in Greek translates to: “Όποιος πρόλαβε, τον Κύριο είδε.” Yet on extra hot Theophania days, when the sun beats down hotter than the wings of the Holy Spirit, on the heads of the faithful, sovereignty is invariably ceded, but only to young, suffering children.

As the procession of priests, bearing the flower bedecked Theophany Icon, winds its way through the crowd to the platform, there is no jostling, no pushing like years of old, for at the end of the pier, a giant screen has been erected, allowing the proceedings to be viewed in crystal clarity. I lament this abomination, as signifying the destruction of the religious saying: “Πίστευε και μη ερεύνα,” although as a result, this was the first year that I actually was granted a vision of the entire event.

The Bishop begins to read from the Bible. “Σήκω βρε αθεόφοβε,” an old woman tugs at the sleeve of a corpulent man with droopy eyelids, dozing upon a straining plastic chair, all the while crossing herself: “They are reading the Bible.”

“Σιγά μη σκωθώ,” the old man snorts, adjusting himself, and settling in his chair once more. “Άμα σκωθώ, θα μου πάρουν την καρέκλα.” The fact that the gentleman in question happens to be the long-serving president of a Greek brotherhood with a particularly robust political culture, is purely coincidental. 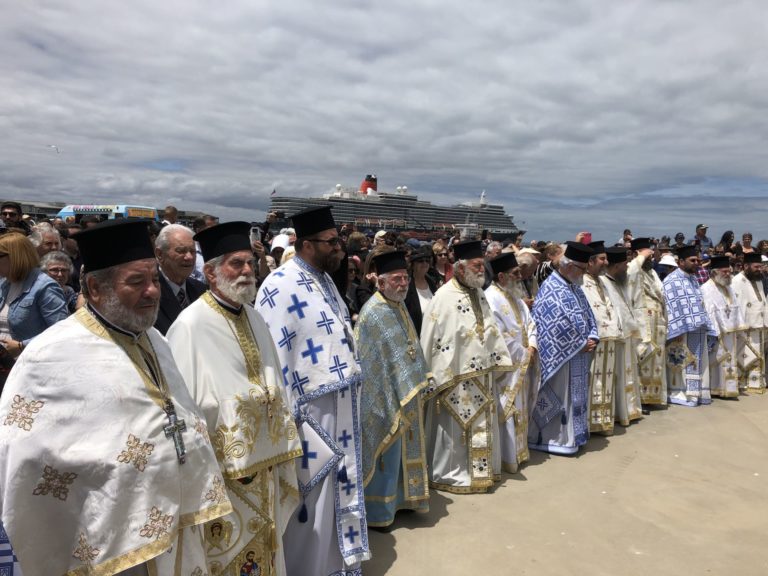 Doves are released and they circle the crowd once and fly off back to their dovecot. The Bishop feigns a few throws, teasing the swimmers and then tosses the cross into the briny. Oblivious to the large screen, people crowd onto the edge of the pier and are shouting. Apparently an unregistered interloper, swimming from the jetty has caught the cross, a unique occurrence, yet…my attentions are drawn elsewhere. A rather harried lady in her fifties poking her finger repeatedly into what apparently is her mother’s shoulder. Employing the lisp that is standard in Greek-Australian female pronunciation of the consonant s, she demands:

On the large screen, I watched as the brave swimmers passed the cross to each other and kissed it. Then they kissed each other. Arising from the waters to receive a blessing and a cross from the Bishop, they were surrounded by wives and girlfriends, also eager to give their champions a kiss. Then it was their mates’ turn to whoop enthusiastically while giving them a kiss, a pinch on the forearm, a slap on the back, a feel of a pectoral muscle, a grasp of a bicep. I viewed this touchfest with mild opprobrium, for, much like Prince Andrew of the House of Windsor, I disdain physical contact, especially with seamen.

In years gone by, I would stay on for the politicians’ speeches, so that I could venerate the Theophany Icon in their aftermath. Instead, this year, after listening to the Bishop’s homily, I retrieved my progeny and took them down the pier to view one of the caiques that took the swimmers out to sea. This was the New Artaky, fitting enough, considering that Artaky, in Asia Minor, was the birthplace of Private Peter Rados, the only Greek to die in the Australian army at Gallipoli.

Though the purchasing of souvlakia and loukoumades is de rigeur at all Greek-Australian events, there is a general unspoken convention among the Greeks of Melbourne that, at Theophania at Port Melbourne, these must be supplemented by something more maritime, such as fish and chips. This is why, even as the folk dancers jolt the pier out of its somnolence, Greek-Australians can be found patronising the piscatorial and potato purveying establishments along the length and breadth of Bay Street and beyond, with an emphasis on Hunky Dory. In memory of the Theophaneia I once experienced in Constantinople some decades ago, I purchased an icy pole instead. As The Age  writes, “spirituality, sun and souvlaki,” indeed. The Age also writes of the controversy over the cross swimmers as a Greek tragedy, presumably because Orthodoxy is salvific rather than tragic.

A particularly hallowed Greek-Australian Theophania tradition does not take place at the actual pier but in the living rooms of Greek-Australians across Melbourne in the evening of the festival. This involves scanning all the news channels to see which one will report on the ‘Theo-Fanya.’ After first examining the screen to see if one can recognise themselves or their acquaintances, a quick comparison of length of the segment, explanation of the event and quotes from a person on the ground allows for a ready reckoner to be compiled, of most racist to least racist television channel, though such indignation that is expressed, rarely lasts beyond the sports segment, or at worst, the weather. There is also a new permutation to this age old tradition: the uploading of one’s own Theophania footage on youtube and Facebook, an electronic infusion of the Holy Spirit, for the couch potatoes of on-line Orthodoxy.

When I was younger, I would like to confound my relatives and friends in Greece by claiming that we celebrate Theophania in Australia by having jockeys mounted on kangaroos chase after the cross along the foreshore.

“Yeah right,” they would laugh. “Next thing you’ll tell us is that you all ride camels across the desert in search of waterholes.”

As I took my leave of Theophania Festival for this year, I whipped out my telephone to record five camels at the land end of the pier, urinating in unison as they awaited their riders. Pressing send, was by far, the most profound festive experience of the day.