Herbs are central to the unique flavours key to Greek cuisine 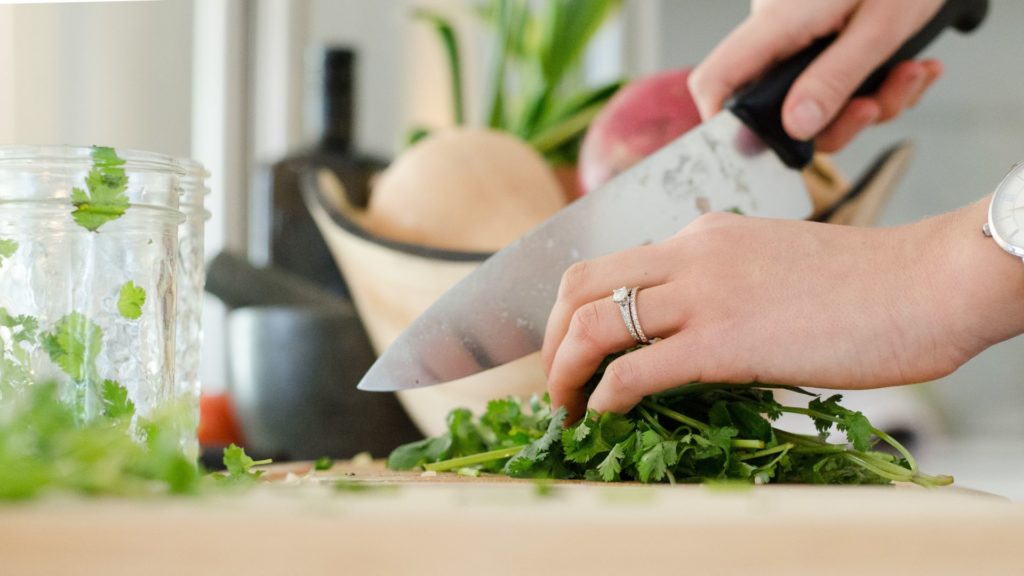 Chopping up coriander. This herb is good with pork, mushrooms, in stuffed cabbage, and is even used in chocolate cake and sweet making. Hippocrates recommended its use as a medicinal plant. Photo: Alyson McPhee/Unsplash

When you consider Greek cuisine there are a few key herbs that you will need to rely upon. And the fresher they are the better. Your ammunition belt of flavours should include oregano, mint, dill, bay leaves and basil among othes.

Greek cuisine generally relies more on fresh herbs than other Mediterranean cuisines which, though using similar basic ingredients, will rely more on the use of chervil, chilli peppers, paprika, saffron and tarragon.The emphasis in Greek cooking is to bring about a balance so that all the flavours of the ingredients are detectable rather than allowing for one flavour to dominate the palate.

Of course, there are many varieties of the herbs growing around the world but if you are absolutely hellbent on replicating the flavours of the past then you would probably opt for the herbs as grown in Greece.

Oregano, basil, parsley and mint, for example, have their Greek variants which taste differently to their counterparts grown elsewhere in the world. It is one of the reason why you will find so many of the first generation Greeks in Australia growing their own herbs and vegetables in their backyards.

Along with culinary uses, many herbs have medicinal properties the knowledge of which often goes back to ancient times.

Mint (Diosmos). The typically “Greek Mint” is a spearmint that has softer mint flavour. Mint in many varieties has been used over the ages to flavour meat dishes, rice and cheese dishes. It is used to enhance tomato sauces. It is also a key herb for dolmathes.
Bunches of fresh mint bruised in boiling hot water create a wonderful herbal tea to relax with or to stimulate in draining hot weather. It has been  used to treat upset stomachs. It also known to soothe sore throats and helps with coughs and chest congestion. The Greek mint plant is hardy and less reliant on water than other mints.

Parsley (Maidanos) the Continental or Italian variant rather than English parsley, is used to garnish salads. It also serves as a substitute for mint in many dishes. As a tea it is said to help with rheumatism complaints. It seems to love Melbourne’s climate as it seems to take root with ease and minimal fuss.

Oregano (Rigani) is a herb that Greeks love to use. Part of the Marjorum family, it comes in many varieties and is a hardy herb that does not need much attention to grow in a garden – it does not need much water, but it does need sun. It is the go-to herb for many Greek meat and fish dishes. It works well in tomato sauces and to lend flavour to vegetable dishes.
On the medicinal front an oregano tea is said to soothe indigestion and work as a laxative.
The herb is linked to happiness and the ancients credited Aphrodite with its creation.

Fennel (Maratho) is used in stews, meats and seafood that have strong flavours and can mellow the herb’s distinctive flavour. It is also used in savoury pies. Anise, a different plant, can be used as a substitute for fennel. The plant grows well in southern Victoria and it is not difficult to find it growing in open urban spaces.

Dill (Anithos) while similar to fennel, lacks the aniseed taste of fennel. It is much used to flavour crusty Greek bred and works well with cucumber and lemon sauces. It also used to flavour seafood, salads, soups and tomato sauces. Also used for tzatziki and to flavour salads. Brewed as a tea, it is said to help with insomnia. The ancients used it to flavour their wine.

Basil (Vasilikos) is a king among herbs and used so often that it is not unusual to find it being grown in a pot within easy range of cooking counters. Basil is king with any dish that uses tomatoes. Its versatility is also evident in many other savoury dishes.
On the medicinal front it is said to be good for muscle spasms and for stomach aches and works against diarrhoea, nausea and flatulence.

Bay leaves (Daphne) are the leaves of the laurel tree used for the wreaths of Olympic winners. They are used purely to flavour a dish and should be removed after cooking because they do not soften with cooking. It does matter whether bay leaves are used fresh off the tree or in their dried form, the result is still an overall subtle presence in a stew or soup.
It is a symbol of chastity as Daphne transformed herself into the laurel tree to avoid the attentions of Apollo.
The leaves can be used directly on the scalp to treat dandruff. They are also used  to treat muscle aches and pains.