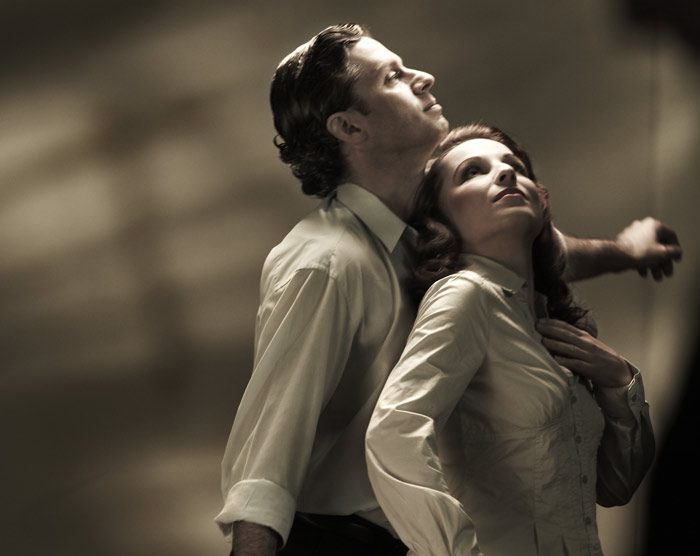 “One day I will sleep soon, it’s been an intense process,” says a visibly worn and emotional Thomas Papathanassiou to Neos Kosmos English Edition, (NKEE) about his work in Stephen Helper’s musical theatre, Cafe Rebetika.

Papathanassiou is not new to theatre, one of his devised pieces Looming the Memory, has toured nationally and won awards.

But Cafe Rebetika is different, “It’s monumental. I am no stranger to theatre, but this show is trying to explore a music, a time in history, a type or people, which is foreign to us these days. But the music is like a time capsule because we are surrounded by the music even today.”

He emphasizes how history can only let us understand aspects of people’s lives, especially the lives of fringe dwellers like Greece’s rebetes.

“Sure we can read about what happened to those people at that time, but it is the music that captures the spirit.”

Papathanassiou is part of a new attempt to capture the spirit of rebetika music and the people that shaped it, the rebetes.

The music began in the slums of Piraeus in the 1920s following the mass expulsion of Greeks from Turkey in 1921.

Rebetika, is a music which was originally derided as working class and oriental and was deemed illegal during the fascist Metaxas regime of the 1930s.

Yet it has, since the late 1950s, become one of Greece’s greatest cultural exports and influenced many Greek composers like Theodorakis, Xarhakos and Loizos.

Rebetika, or commonly known as ‘Greek Blues’ by non Greeks, captures the spirit of fringe dwellers, drug addicts, whores, communists and pimps that swelled the ranks of the rebetes.

“We have tried to as much as we can to be authentic to the period, to the people and we have conducted extensive research.

“What has been fantastic with Stephen is that he has always said, ‘if it’s a situation which is problematic go back to asking would it be like for the rebetes?’” says Papathanassiou.

He plays a young man torn by images of his home in Smyrna (now Izmir) in Turkey, burning and his mother and farther slaughtered by the nationalist Turks. The images of his past terrorise him to the point of seeking solace in heroin.

“As a character I have fallen into a debilitating heroin use to numb the pain. Being a migrant, losing his family in Syrna due to the Catastrophe, he faces the racism of the Greeks who call him ‘Smyrnian filth.’ Growing up in Athens from a 12 years old – he finds resolution only in the end, in a jail cell.”

Trying to capture the existentialist spirit of the rebetes has eluded many theatre makers but Papathanassiou believes the research and the focus on authenticity sought by Stephen Helper the director, combined with being Greek has succeeded.

“As a Greek playing this roles, I can speak for all the other actors who are Greek in the play, it goes deeper than just performing, we are feeling our culture our music, this is almost spiritual.”

He has no qualms in raising the difficulties they have had with seeking a balance between the music and narrative, “It’s hard we want to introduce people to the music, which has been around for so long. But it’s not a concert, it has to be done in a theatrical form. It has been tough to meld the two in a seamless way – but I think we have achieved it.”

Given the initial sell-out performances of Cafe Rebetika, it seems that the cord of authenticity has been hit.

Cafe Rebetika is on at the Arts Centre’s Fairfax Studio up to May 9, for bookings ring 1300 136 166 or go to www.theartscentre.com.au