Love me Tinder: The legendary Effie takes on dating in the internet age 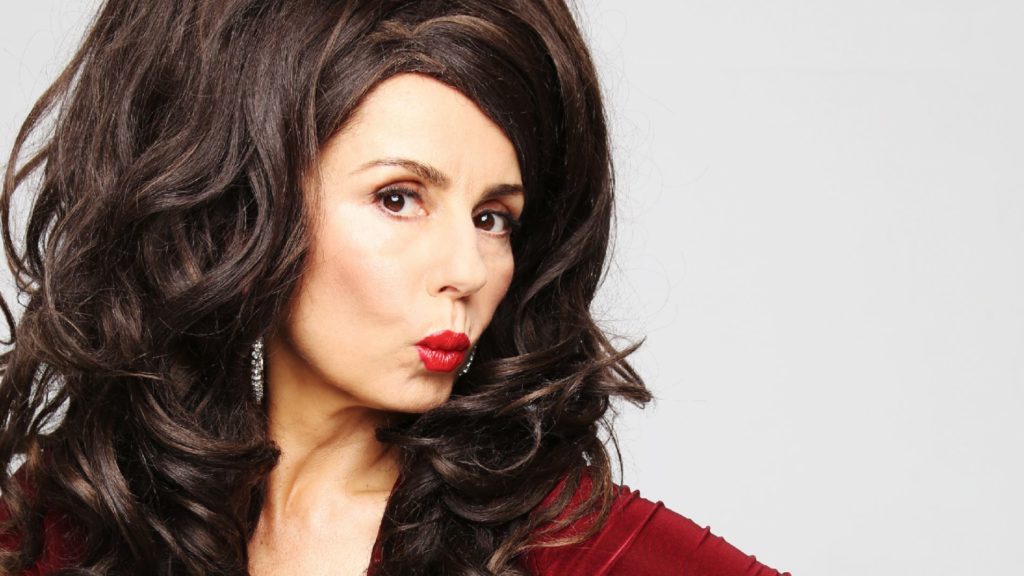 One of the funniest, most colourful shows Mary Coustas has put together is heading to Melbourne following huge success at the Sydney Comedy Festival this year.
She brings back the delightful, sometimes raw character, of Effie, aka The Virgin Bride in the show Love Me Tinder, where the anti-heroine decides to test modern-day dating options and attempts to find out why true love is so hard to come by and keep.

Through awkward incidents and insightful jokes Coustas holds a mirror to the complexities individuals face in their endless search for love. Why do we keep wanting more? Why are we never happy?

Even Effie herself – swimming in a sea of happiness being newly-wed to the love of her life Shane Bradley Cooper – is experiencing a seven-month itch and is tempted to see what’s out there and why everyone has become so obsessed with swiping all of a sudden.

Have people lost faith in falling in love organically and is it possible to stay faithful when there are so many options out there? Love is hard when it is as easy to go on a date as it is to walk into a super market.

Neos Kosmos sat down with Mary – and Effie – and had a sizzling Q&A on this hot topic.

What was the idea behind ‘Love me Tinder’?

I wanted to explore the idea of how illusive love is and how when we finally get it we can so easily sabotage it. Relationships are complicated. The content is personal to Effie’s greatest dilemma which is love versus ego, to innocence versus curiosity.

I wanted to explore the complexities of Love and Fidelity through Effie who, prior to her marriage, was a frigid fantasist. She was single for the longest time. In her words, she was “on the shelf by herself”. And for good reason. Effie had been way too picky and never thought anyone was good enough for her. Then the clock started ticking and ticking, and before she knew it she was 40 and completely alone. And panic set in. Desperation replaced delusion. And just when she thought there was no hope whatsoever, and in the depths of her own despair, she decided to go to her 25-year school reunion. And, as fate would have, it she saw her first ever love from primary school. Her first ever kiss. Shane. Shane Bradley Cooper. Now a Plastic Surgeon. Eureka! And that night their love struck courtship began. Shane has never gotten over Effie. As far as he was concerned she had him at, “Hello. Good Thanks” 30 years earlier.

Given her new love of Tinder it raises the question… has the Virgin Bride failed to find true love with Shane?

Effie loves Shane wholeheartedly. So love is not the issue. The problem is that on the night of Effie the virgin bride’s honeymoon, a beast, a vulverine was released in her southern hemisphere. And that has unleashed a dangerous curiosity in her. In the past Effie had enormous ‘won’t’ power and now she’s balling with with her willpower? Tinder is the ultimate temptation and in her words: “There’s nothing wrong with just a little browsing, is there? I’m not looking to buy. But what if I come across a sale item I just can’t say no to?That’s when it gets dangerous. And since I got married men have never found me more attractive. Everywhere I go they’re sniffing around me like Beagles at an airport.”

Did personal experiences of friends and family inspire you to focus on online dating?

Only some of the people I know would admit to using Tinder. But I researched it a lot before writing the show, And that’s where it became obvious that Tinder and other online platforms like that have become the ultimate lures. The thing that makes it harder to resist is that now temptation is at the end of your fingertips complete with photos and profiles and you don’t even need to leave the house to flirt and orchestrate meeting up with someone. It’s become a social sexual sport with literally endless options.

What is your personal opinion of dating on apps these days? As an observer, do you think one can find love online?

I’m not a huge fan. I think it can be very damaging to the soul for so many. I try not to despair because I’m ultimately an optimist but surely there’s no better way of meeting someone than face to face, with no filters, only reality and instinct to guide us.

What is it that keeps Effie’s shows sold out? What attracts audiences?

l think that Effie has evolved a lot over the years and as much as we know who she is and identify with her she speaks about the things that we all struggle with in a way that is honest and relevant. I think that’s always been her appeal. If you haven’t seen her live it might be easy to think that it’s not relevant but there’s a reason why the shows sell out… I have done my best work in the last 5 years. And that’s because I’ve taken greater risks – half of my show is improvised every night. I involve my audience – they are stars too. And I delve further into the things that forever matter to us all. Things like identity, vanity, gender, family, sex, class, relationships, love. People that see what I do don’t get offended. They feel liberated, validated, entertained, understood and seen.

What should we expect next? Are you preparing a new show?

l want to continue touring this show for at least another six months. I’m currently doing New South Wales and about to do Melbourne. Next year I’m doing Adelaide, Brisbane, Hobart and as many interstate venues as I can fit in. There’s a hunger and a demand for this show and I love doing it. And I want as many people to see it as possible. As for the future I am always working on multiple things. I do a lot of corporate work and public speaking which could mean anything from entertaining politicians, to speaking at women’s forums, to cultural festivals to performing for the financial sector, or at AFL functions – it’s endless and it’s been that way for a long time. Actually I can’t believe it’s been over 30 years. I’ve had the privilege of having a job that makes me and the audiences happy and for that I am eternally grateful.