Spices that flavoured Greek cooking from ancient times to the present 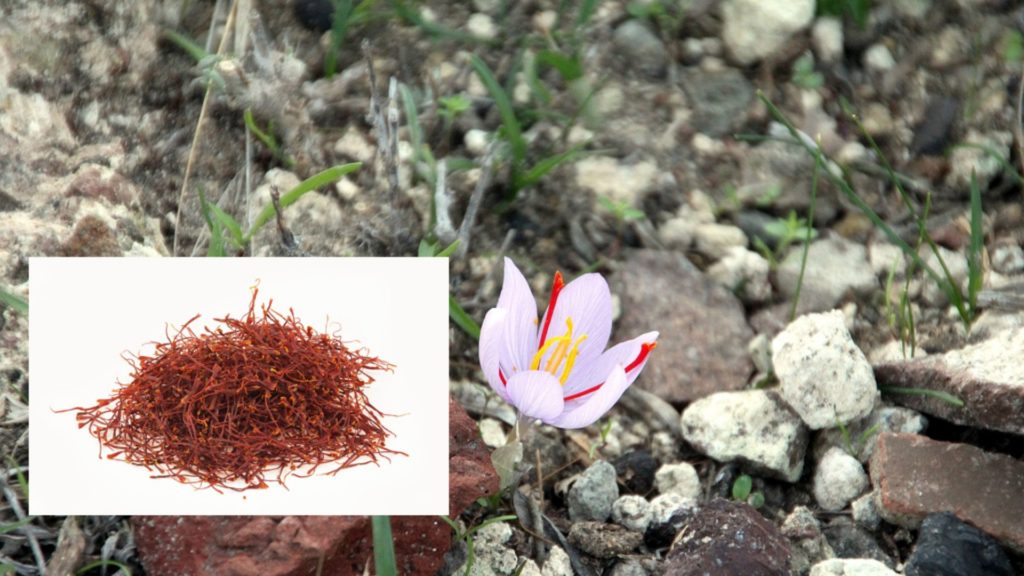 A composite image shows a saffron plant growing in Santorini, with the three yellow stamens in the centre. The stamens (inset image Photo: Hubertl/WikiCommons) are what become the saffron spice. Photo: Klearchos Kapoutsis/WikiCommons

Recently we published an article about popular herbs in Greek cuisine. Herbs are derived from the leaves of herbaceous plants that lack woody stems– apart from bay leaves which come from the laurel tree. The herbs are locally grown.

A spice is derived from other parts of a selected plant – often imported – such as its roots, bark, seeds, berries or the flowers. Usually these are dried and often ground into a powder before they are applied to flavour or garnish a dish.

Spices tend to provide a stronger flavour than herbs. They have properties that suppress the growth of bacteria and are also used to preserve foods and contain essential oils that have been considered to have medicinal properties.

While Greek cuisine relies heavily on herbs, spices do have key roles in many dishes.

1. Pepper (Piperi). While Greeks tend to disdain heavily spiced foods, pepper has been very much part of the Greek table since probably the times of Alexander. Grown in India, pepper was one of the key drivers of the spice route from India to Europe. Where there were just a few ships  to brave the journey from the Red Sea coast of Egypt in the times of the Ptolemies, the trade was to expand  rapidly with the arrival of the Romans on the scene.

The ancient Greeks used pepper to flavour their wine and it was only applied to food as a medicine. We can thank the Romans for its wider use to flavour food – a habit that has survived to this day.

2. Saffron (Krokos).  Saffron has a long history in Greece and is part of its mythologies. It sprang out at the place where Hermes accidentally killed his friend, Krokos. The three yellow stamen of the purple flower represent three drops of blood shed by the dead Krokos.

Saffron is grown in Greece and is used mainly in rice-based dishes but it is also used to flavour seafood dishes and soups. Thankfully a little goes a long way in terms of adding flavour to a dish such as a pilaf and lending it its distinctive yellow colour.

The spice saffron is but a tiny portion of the flower of the Crocus Sativus plant. The flower itself is purple and only the three stigmata (the female part of the flower that germinates pollen) within the flower are used to make saffron. As a result, the harvesting and stamen extraction is done by hand. It needs over 150,000 flowers to make up one kilogram of saffron.

3. Cloves (Garifalo). Like pepper, cloves are derived from the Far East. Cloves are the aromatic flowering buds of the  Myrtaceae,(Syzygium aromaticum) tree species that is native to the Indonesian islands. Cloves are a much loved spice in Mediterranean and Middle Eastern cooking having a key role in cakes, pastries and sweets – most notably in Kourambiedes. It is also punctured into pork before it is roasted, and is used to season other meats, fish and vegetable dishes.

4. Nutmeg (Moschokaritho). Another Indonesian import, Greek dishes like Mousaka, pastitsio would not be the same without nutmeg. This versatile spice is also used in desserts, sauces and liqueurs – notably a key ingredient of Tentura from Patras. It is derived from the seed/nut of the nutmeg tree. Once it is picked is then dried for two months until the kernel inside rattles when shaken. The shell (which is origin of the mace spice) is then removed and the egg shaped nutmeg is what makes it to the Greek kitchen.

5. Coriander (kolianthro). Where the Greeks accepted pepper from India, some say that Alexander the Great brought Coriander to India – although there ancient Indian texts referring to the plant that predate the Macedonian king’s incursion by several thousand years.

It is widely believed that the plant was first grown in the eastern Mediterranean. The earliest archaeological evidence of the plant was found in a cave in Israel and is considered to be over 8,000 years old.

The fresh leaves of the the Coriander plant ( a member of the parsley family) make it a herb, that tastes quite different to the small round seeds that are ground and treated as a spice. Ground coriander lends an earthy, lemony flavour flavour to dishes using pork, mushrooms,and stuffed cabbage leaves. It is also used with chocolate in cakes, and for making sweet dishes.

6. Mahlab/Mahleg (Mahlepi). Mahlepi is a Greek native spice that is derived from the kernel of a select cherry tree seed. Mahlepi is a rarely used spice that makes its appearance in the breads especially prepared for Easter and Christmas and New Year celebrations.

It is sold whole dried cherry seed or in powdered formas Because of its relative rarity, Greeks of the Diaspora would use substitutes in the form of cinnamon, lemon rind or anise seeds.

READ MORE: Herbs are central to the unique flavours key to Greek cuisine

7. Cinammon (kanela). What would rizogalo and baklava be without cinnamon? The spice is thought to have come to ancient Greece by way of Egypt and was highly prized. It is thought to originate in India and was, along with pepper, one of the most valued products of the ancient spice trade. The Romans set a price of 1500 denarii for one pound (327 grams);  the equivalent of 50 months of wages.

In Greek cooking it is also used in savoury dishes using lamb and chicken. It is a key ingredient of stifado.

8. Mastic (Masticha). This spice derived from the resin of the mastic tree a native of Chios (it is called the Tears of Chios because the beads of resin resemble tears). It is ancestor of chewing gum and when chewed(with some effort) it softens into an opaque pine flavoured gum. Masticha  used in liqueurs, sweets and desserts as well as to flavour breads and cheeses. It is also used in the making of Turkish delight and ice cream.

9. Cardamom (Karthamo). The pods containing Cardamom seeds are used to season vegetable dishes and sauces, in lemon cakes and fish marinades. Equal parts of cinnamon and nutmeg can act as acceptable substitutes for cardamom. In Middle Eastern countries, the seeds are ground into a powder. The ancient Greeeks and Romans used cardamom in their perfumes.

10. Sumace (Soumaki). The spice is ground into a coarse powder derived from the berries of Sumac bush which is native to the Middle East. It is not commonly used but is prized for its lemon flavour – without the acid taste of the fruit. It is rubbed on to grilled meats, in used also in stews and pita wraps. It is also used in rice and vegetable dishes.