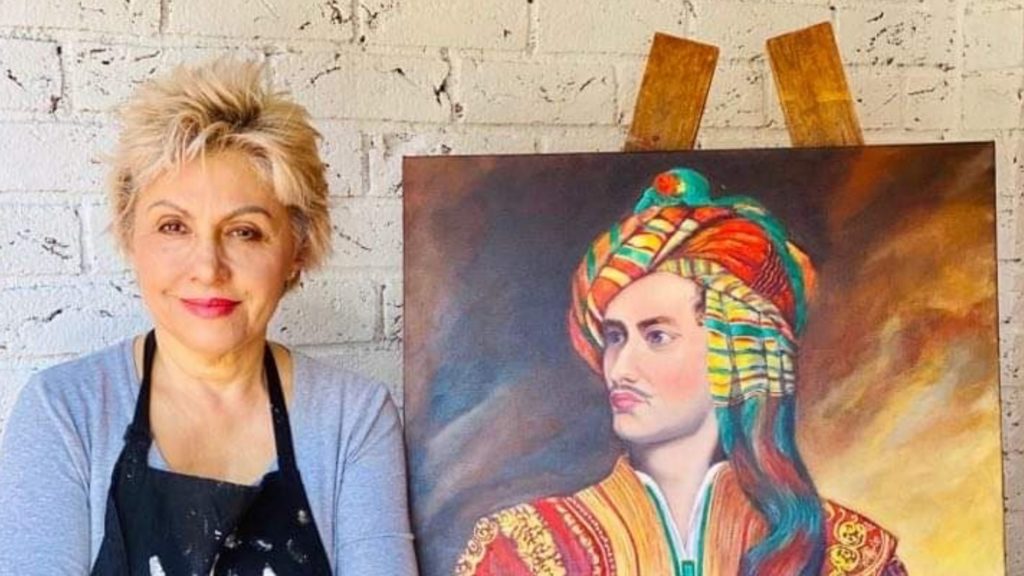 I have known Angela Kiki Konstantinopoulou since the age of six when we were both at Primary School. She was always interested in art and I in music. She is an accomplished and award-winning designer and artist and was a finalist at the Fisher’s Ghost Art Award and her painting is exhibited at the Campbelltown Art Centre. She also received a Statement of excellence from the Visual Arts Department of Campbelltown TAFE for her work “Greece is Bleeding”, a reference between the Battle of Messolonghi in Greece in 1825 and the Greece of today.

When I saw her paintings of Kolokotronis and Lord Byron and the series of paintings she is in the process of completing, with many of the heroes and heroines, of the Greek Revolution for Independence I became intrigued. Angela’s work, or KIKI as she signs her name, is art from the heart with a naive love of country, a patriotic outlook from within and without the Greek sphere. An art form that deserves to be acknowledged and applauded. Hopefully, she will be able to exhibit her work all over Australia next year and I believe she is worthy of sponsorship.

Angela won an award at the Fisher’s Ghost competition and her artwork Fisher’s ghost is on display at Campelltown visitor’s centre.

The interview below is but a short introduction to Angela Kiki and her work.

Where were you born and where did you grow up?

I was born in Achaia Greece. My parents migrated to Sydney Australia in 1960 when I was 2 years old. I grew up in Earlwood and my parents started a clothing factory in the late 60s in Redfern.

Tell me about your journey and studies as a fashion designer and an artist.

After high school my parents encouraged me to study Fashion Design as they wanted me to be in the family business. I, on the other hand – although I loved fashion design –  wanted to go to Europe and study art. I decided to follow my parents wishes so I enrolled at East Sydney Technical college to become a fashion designer and later transferred to St George Technical College which was closer to my home.

While living in Sydney in 2005 I met and was influenced by portrait artist Dave Thomas who lives in Bowral. I started painting with him and started to exhibit in various art shows. I also studied Iconology for two years with Professor Samil Luka at the Coptic Orthodox Church in Punchbowl.

Unfortunately, a car accident in 2010 left me with serious injuries on my neck and right shoulder which made me stop painting. That situation caused me a lot of physical and psychological trauma and, in 2014, I left Sydney and went to Greece to spend time with my family and continue the long path of recovery. 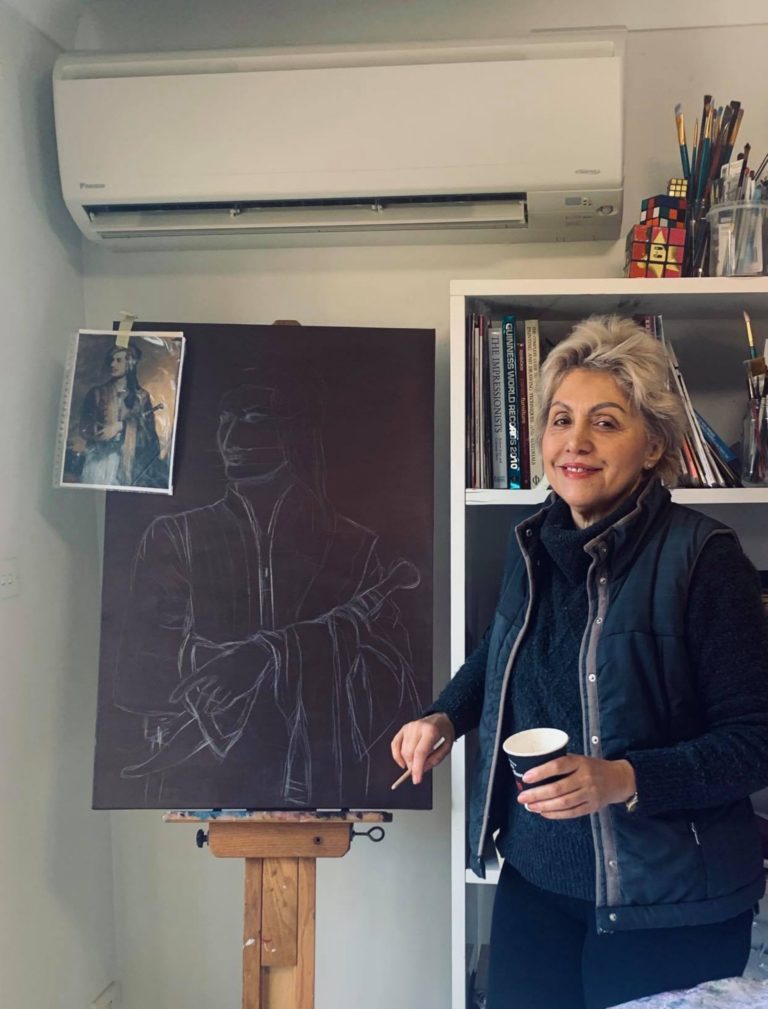 While in Greece in 2016 I joined the committee of the Art Society of Patras and started to paint and exhibiting my Art. During that time Greece was still going through an economical crisis and my friend Elena Fligou and I decided to start a non profit Greek Traditional Arts and Crafts Society to help the preservation of Greek traditional craft and at the same time help women and young girls learn different trades in order to become financially independent. Our goal was teaching trades which are diminishing in today’s modern world that will help people keep our culture and Heritage alive. During my stay I taught history of costume and design in the Department of (κόβω – ράβω – Δημιουργώ ) Cut Sew Design. The society is still operational and I often contact them from Sydney through Skype and ZOOM.

I returned to Sydney in November 2017 and in 2018 and completed a Diploma of Visual Art at Campbelltown TAFE.

This period in my life was very challenging.

I started to study Graphic Fundamentals Certificate III at TAFE this year as the use of technology in Art intrigues me but due to the current situation with COVID-19 I have decided to postpone it for now but will continue next year. I am very grateful to my teachers Lorna Grear who made my classes very rewarding and Head Teacher Lydia Kullik whose inspiration and positive attitude gave me strength in the early stages when COVID-19 closed down at TAFE.

How many years did you spend in Greece? And what did you do there?

In 1980 my family and I moved back to Greece where my parents started a fashion business. I took over the Fashion design department and quickly fitted in to the life style and fashion at the time. I created haute couture for many Greek celebrities and for beauty pageants as well as wedding dresses and bridesmaid dresses.

During this time I also designed the summer and winter uniforms for the Greek Delegates and Ministry of Foreign Affairs of Greece which they wore at the 1992 Mediterranean Games held in Cyprus.

In 1992 I won a competition and started working for Patras’ City Council designing costumes for the carnival before I returned to Australia in 1995.

As mentioned earlier, I returned to Greece in 2014 after a car accident I had and focused on my physical and mental health. In 2016 I joined the committee of the Art Society of Patras and started to paint and exhibiting my Art and created a Greek Traditional Arts and Crafts Society.

Greece has always had a significant place in my heart and being able to spend time there has been a great source of inspiration.

When did you start your current series of paintings?

It was in September 2016 that I started my current series of Greek Independence Day Heroes.

My first painting was of General Theodoros Kolokotronis commander in chief of the Greek forces.

In which, if you remember in 2017, you saw it and suggested I do a series of the ‘Heroes of the Greek Revolution’.

What made you paint him with a tear coming out of his eye?

I painted a tear coming out of his eye because that’s the way I feel he would be feeling if he could see that the war and the struggles he and his companions endured for the freedom of Greece were in vain. I feel that pain while painting all these Greek heroes.

Why is it so important to you for this part of Greek History to be remembered?

This Historical revolution and the struggle for freedom should never be forgotten. It defines who we are and our beliefs; it represents who we are as a race of free people. Greek people will always oppose oppression and slavery. These fearless freedom fighters gave up everything for our country and our freedom but were also in a way betrayed. I want to memorialize them for the new generations of Greeks as we have to always remember and never forget them. This series is my contribution to their Legacy.

What is your favourite painting?

I will be able to tell you that when I finish the series.

What is it about Lord Byron that intrigues you?

Lord Byron was a free thinker in a society full of taboos in those times. His beautiful poetry is eternal, his charisma wit and charm an inspiration, and the fact that he was an incurable romantic always puts a smile to my face. Lord Byron was also a very dynamic and tireless man, he fought oppression with passion. He wanted liberty for every single person. Although he was English, he came to Greece full of energy and ready to help the revolution. He also brought a lot of money and jewels in which he gave to the Greek War of Independence. He must never be forgotten.

Many people may call your art nationalism. What do you think about this? Is there a difference between nationalism and patriotism?

I certainly do not see my art as a reflection of nationalism. My paintings represent prominent figures of the past of a nation that fought for independence. There is a big difference between nationalism and patriotism. Nationalism does not belong in our History only Patriotism exists in our history and in our DNA. From ancient times Greeks have been the beacon of democracy and freedom, fighting for the ideals of patriotism.

2021 is a big year for Greece where are you planning to exhibit your work?

The current situation with Covid-19 has created a lot of turmoil in the world of Art and the preparations for the celebrations of the 200 years from 1821. If everything goes well my work will be exhibited at AHEPA Hall in Rockdale in the end of March 2021.

The Hellenic Lyceum will also exhibit it on the 20 March 2021 in their event at The University of New South Wales.

I am also currently in the process of closing more exhibitions in Sydney Melbourne and Adelaide and awaiting dates in which people will be informed via local newspapers closer to the end of the year. Unfortunately, dates may also change due to the situation with COVID-19.

Are you planning to paint more paintings for your series?

Definitely! I will be adding more paintings including the Souliotises in Zaloggo and the Palikaria, the first Greek Australians who were brought to Australia in 1826 as convicts. Dr Panayiotis Diamadis, Genocide historian, has been of significant help providing a lot of information regarding the first Greeks that came to Australia and lived and worked in the Macarthur area.

Are you looking for financial support for your paintings?

Ideally, yes. With the current situation, any financial support would help take care of more expenses like seeing my paintings framed in the manner they deserve.

Eleni Elefterias-Kostakidis is an academic, writer and owner of the bilingualbookshop.com.au, which operates online.