On the blue waters of Greece – The Anzac Rowers of Lemnos Neos Kosmos recently reported the success of the Hellenic rowing team in the European Under-23 Rowing Championships. The story of rowing and a love for the sea has a long history in Greece as well as Australia. This link is woven through the Hellenic link to Anzac, with many diggers rowing the waters of Mudros Bay during the Gallipoli campaign and one of them was an Olympic rower who would row his last in the waters of the Northern Aegean. This is their story.

The beach and the sea is an essential part of Australia’s culture. Our indigenous peoples plied Australia’s rivers and coasts in search of the sustaining fruits of the sea and rivers. Sailing and the sea have been a part of modern Australia’s history since the arrival of European settlers. For many of us summer marks the arrival of our days going to the beach or out on the waters of our bays and surrounding seas for relaxation and rejuvenation.

Greece and its peoples have also had a connection to the sea over millennia. The sea features strongly in Greek myth and legend, no doubt reflective of the real importance of the sea in the life of its people. As Poseidon ruled the waters, Jason and Odysseus would row and sail across the seas, often at the whim of Poseidon’s favour. The sea would determine the fate of Greece’s story on many occasions – from Salamis, through Lepanto and Navarino, to the Hellenic Navy’s naval victories in the northern Aegean in 1912-13. And in peace seafaring would play a key part in Greece’s economic and social life, whether in the history of its large maritime fleets, the fishing industry of the Islands or in the sporting achievements of Greece’s Hellenic Rowing Federation with its sportsmen and women winning Olympic and European championship medals. “Ulysses and the Sirens,” an oil-on-canvas painting by John William Waterhouse (1849-1917) created in 1891. Source: National Gallery of Victoria. The cover of a popular edition of Homer’s The Odyssey, available in Australia before the First World War. Source: Author’s collection.

A few years ago I came upon the full-scale recreation of the Ancient Greek sea-going oared vessel at the Piraeus naval military museum. A student of ancient as well as modern history, I was amazed at its size, the effort taken to recreate it and could only imagine the scene as it gracefully sailed the waters of the Aegean.

As the advanced base for the Gallipoli campaign, Lemnos would play home to tens of thousands of Allied soldiers, including some 50,000 Australians. Mudros Bay would provide safe haven for hundreds of Allied ships at a time. Its shores were dotted with Allied camps, field hospitals and supply depots – their tents and buildings visible from the ships at anchor there.

The waters of the Bay played a key part in the life of the Australians who came to Lemnos. They were anchored in its waters, often watching the local fishing boats darting across its waters selling goods to the eager soldiers aboard the ships. They would cross its waters by hiring local fishermen – as the Australian war correspondent Charles Bean did – to take them across the Bay, often to visit Allied ships. Later a ferry service would also be established. But some would sail the Bay themselves, rowing its sometimes choppy surface as it was buffeted by the strong winds that flowed across the Island from the Dardanelles and beyond. 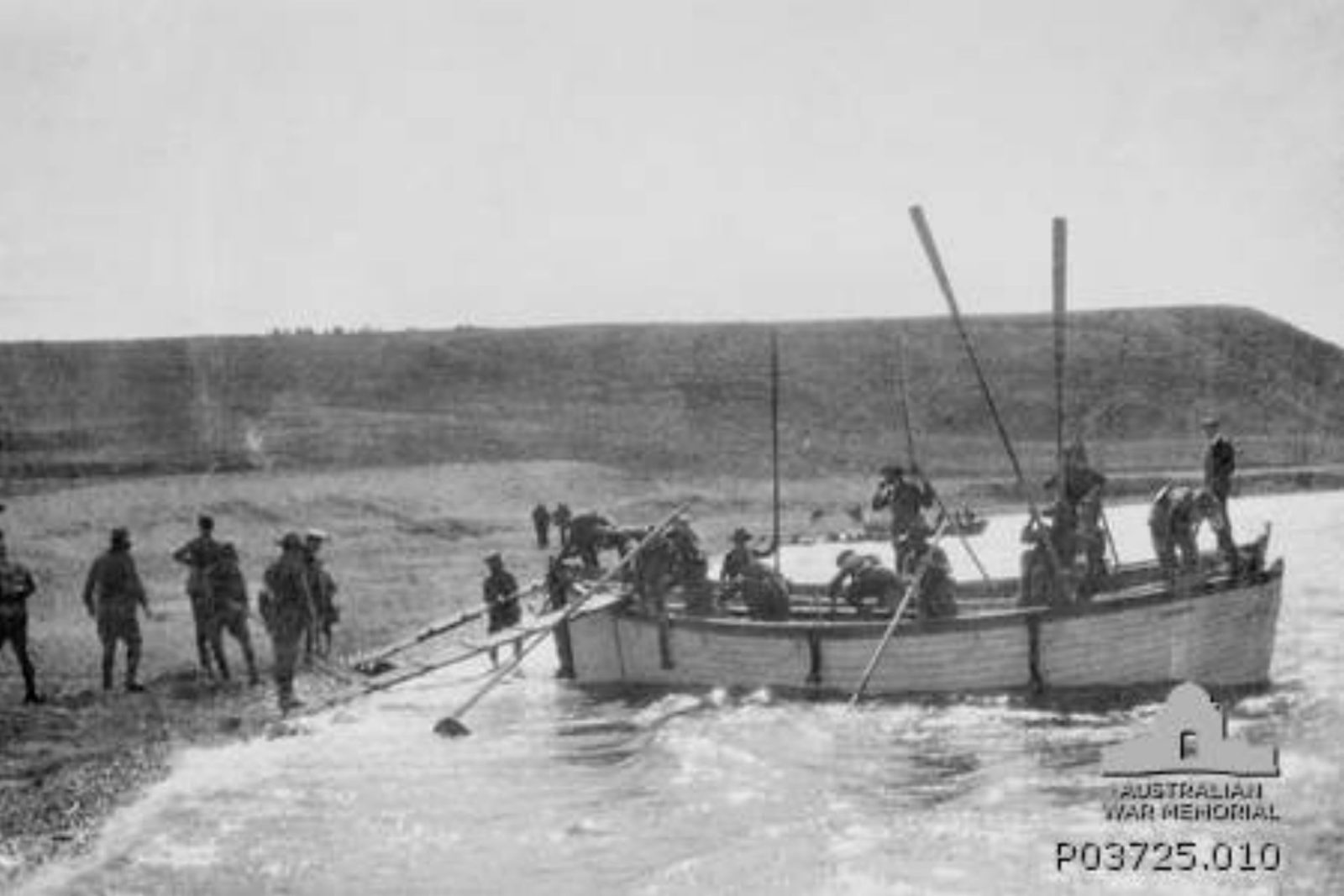 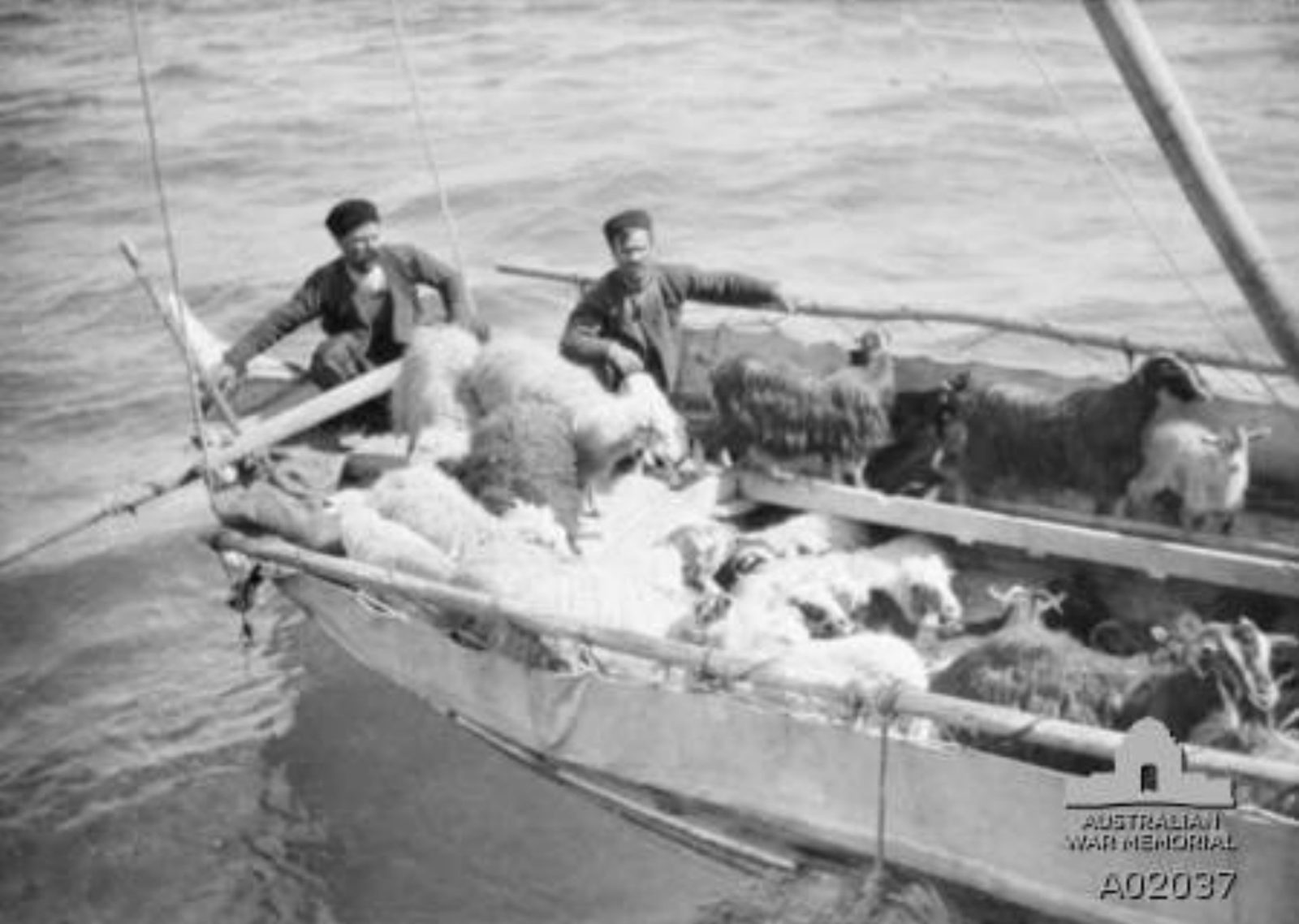 Two Greek men in a boat, handling goats and sheep for the Indian troops on the Gallipoli Peninsula and Cape Helles, the animals having to be killed by the Indians themselves. Gallipoli area (possibly Lemnos or northern Aegean coast), 1915. Australian War Memorial, Image Reference A02037.

Australian Army war diaries, personal diaries, letters and memoirs contain many references to soldiers sailing on Mudros Bay. I came across many of these references during my research for Lemnos & Gallipoli Revealed. For example two young Australians – Private Leslie Wilkinson and Private Henry Gissing – both wrote of their having rowed on Mudros Bay during their time on Lemnos, the former as practice for the landings and the latter for recreation.

There were also at least five Australian sporting rowers came to Lemnos during the Gallipoli campaign, with historian Scott Patterson re-telling the story of three of them. Sydney’s Second Lieutenant Syd Middleton and Tasmanian-born Lieutenant Keith Heritage, both of the 19th Battalion – were club rowers who had rowed at state level, England’s Henley Regatta and the 1912 Olympic Games before the war. While Syd and Keith may not have rowed on Mudros Bay, Adelaide’s 29 year old Private Thomas Whyte of the 10th Battalion definitely did.
Before the war Thomas had rowed at Adelaide’s St Peter’s Anglican College as well as the Adelaide Rowing Club. When he arrived at Lemnos in March, Thomas and his comrades were one of the first Australian units to arrive there. Stationed aboard the transport HMT Ionian anchored in the Bay, Thomas was one of the volunteer oarsman from amongst the 10th Battalion soldiers who would spend the days before the landings rowing the troops ashore. As Patterson writes Thomas and his fellow volunteers became known as “the uber oarsmen around Mudros Harbour.” They rowed officers between ships and from ship to shore, took messages between ships and landed men and supplies ashore. They would take part in practice landings, sometimes at night, rowing fully laden boats. Thomas would write home of the strong winds on the Bay, making much work of pulling the heavy boats, on one occasion taking two hours to reach a jetty on the shore. On other occasions, Thomas and his crew got permission to row around the Bay, viewing the great warships anchored there, including the battleship HMS Queen Elizabeth.

Fatefully, Thomas would be one of the volunteer rowers who would row the boats that would take the Anzacs the last few hundred yards onto the beaches at Gallipoli. On the evening before the landings, Thomas wrote with some bravado that he felt the same as he did before an important boat race. It was here, rowing in the waters of the Northern Aegean that Thomas would be fatally wounded, shot by the enemy as he rowed, unable to crouch, back towards the ever closer shore and the enemy. He would die aboard a hospital ship and be buried at sea. In writing home of Thomas’ death, his friend Private Arthur Blackburn wrote that “it was largely due to the courage and endurance of Tom and his fellow rowers in all the boats that everyone was landed with minimum loss.” 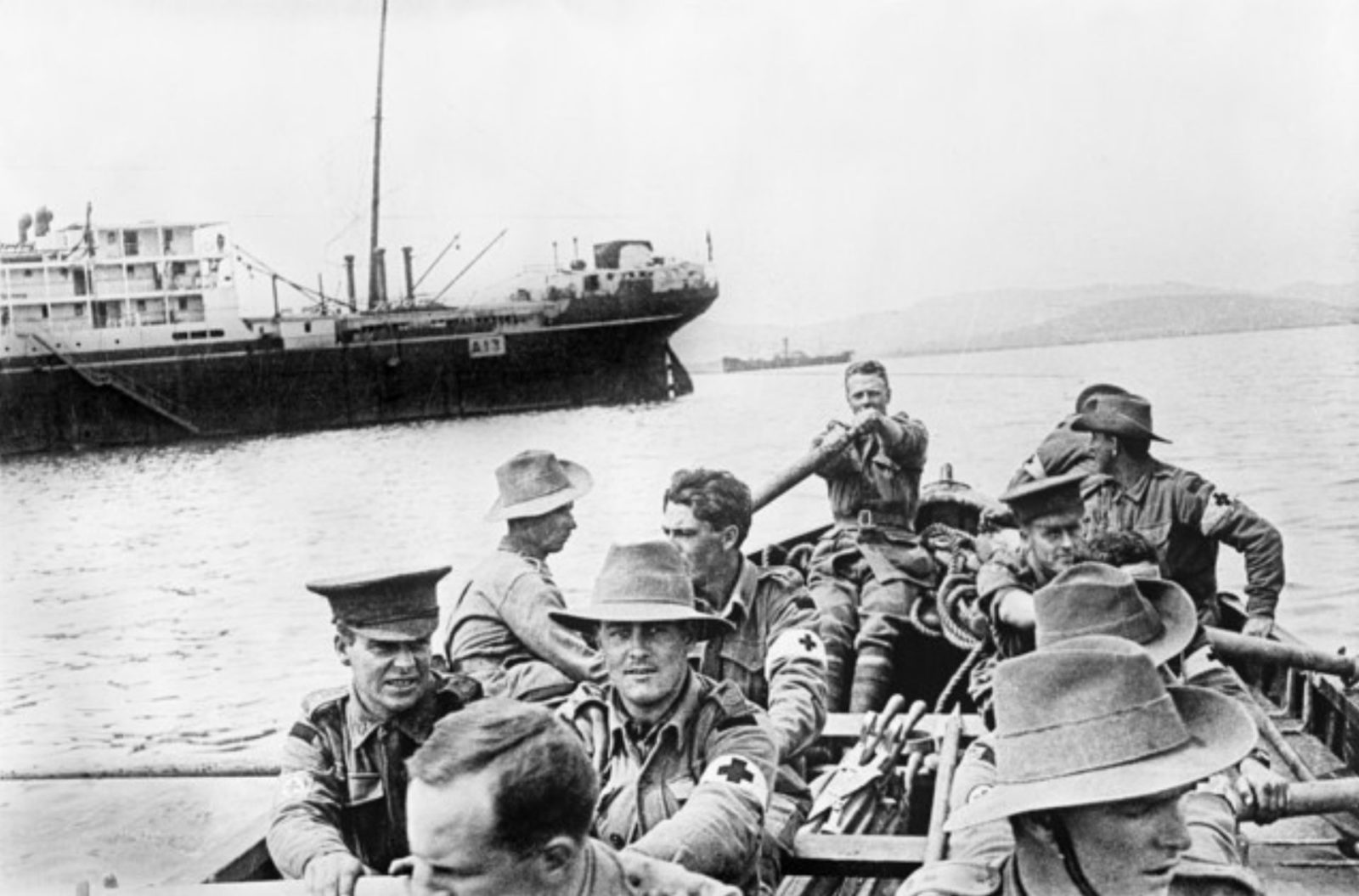 Another Australian rower would land at Gallipoli but would also be fatally wounded there. 22 year old Private Ralph Berryman was a warehouseman from Melbourne who had rowed for his local club in Hawthorn before the war. Wounded at Krithia, Ralph was brought back to the hospitals on Lemnos but died in June and was buried in East Mudros Military Cemetery. Back in Hawthorn Ralph’s name is etched on his Rowing Club’s memorial near the waters of the Yarra where he would have rowed.

Others wounded or killed at Gallipoli would be rowed ashore at Lemnos for treatment at its field hospitals or burial in its war cemeteries. While attached to the 1st Australian Stationary Hospital at East Mudros Private Henry Gissing wrote in his diary in May 1915 of having performed “the sombre duty of rowing two corpses ashore for burial, a very sad sight but one becoming very common.”

The fifth Australian rower who came to Lemnos during the campaign was Sydney’s Francis Septimus Kelly, who sailed into Mudros Bay before the landings and returned to camp their after the end of the campaign. Educated in Australia and England, He had developed his skills as a rower in England, taking part in the Henley Regatta over a number of years as well as being part of the British Olympic Rowing Team which won a Gold medal at the 1908 London Olympics. While he may not have rowed at Lemnos, he might have envied the Greek fishermen plying Mudros Bay.

As these Australians rowed the waters of Mudros Bay, some may have been aware of the stories of the ancient Greek mariners of yore from their education or reading in Australia before the war. And maybe some may have seen the great painting by John Waterhouse – Ulysses and the Sirens – during a visit to the National Gallery of Victoria.

The story of rowing and its part in the Hellenic link to Anzac would continue into the Second World War. During the Second World War Greek civilians assisted many Australian and other Allied soldiers to escape from capture or custody. From the beaches of the Peloponnese, through the waters of Evia, and on to the coast of Thessaloniki and the Halkidiki peninsula, they took these tired and weary soldiers across the seas in their boats, rowing and sailing as needed, towards freedom. This is the story of Private “Skip” Welsh from Frankston who was assisted in his escape from Thessaloniki back to the Middle East with the help of locals. He spoke later of rowing a small boat with a few other Allied escapers, all under the navigation of a Greek Orthodox priest from Mount Athos. And so when we look at people rowing their boats across the sea – whether on Greece’s blue Aegean or the waters of Australia’s bays and rivers – think of the Anzacs who rowed in Greece all those years ago, emulating the heroes of Greece’s mythic past, of Jason and Odysseus.

Jim Claven is a trained historian, freelance writer and has been Secretary of the Lemnos Gallipoli Commemorative Committee since its foundation. He has been researching the Hellenic link to Anzac across both world wars for many years and is also the writer of Lemnos & Gallipoli Revealed: A Pictorial History of the Anzacs in the Aegean 1915-16. For further reading he recommends Scott Patterson’s The Oarsmen (Hardie Grant, 2019) and the diary of Frederick Septimus Kelly, The Lost Olympian of the Somme (edited by Cooksey and McKechnie, Blink, 2016). He can be contacted at jimclaven@yahoo.com.au