Flessiada in Messinia, a most precious memory of a holiday in Greece 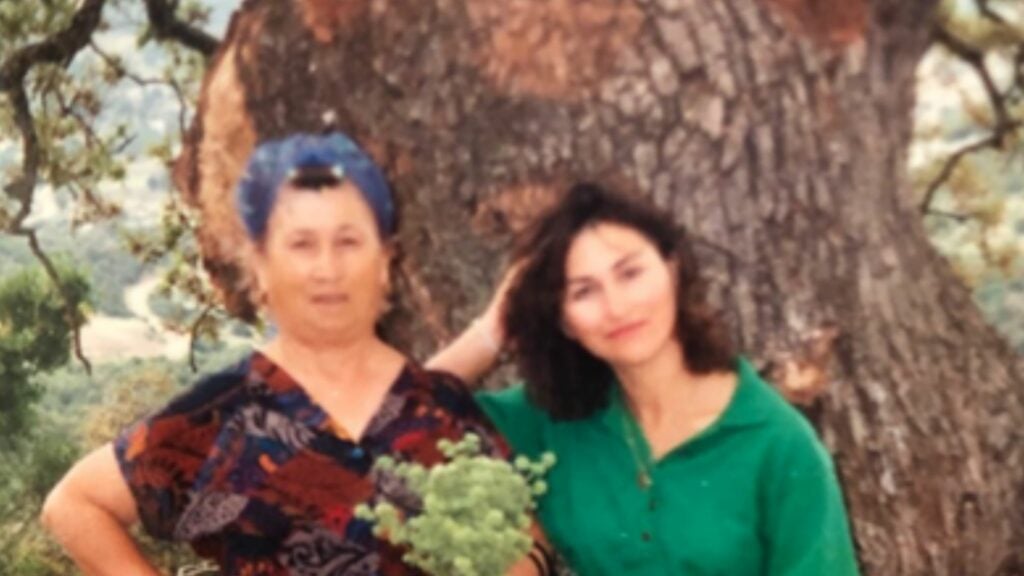 My most precious memory of holidaying in Greece was the very first time I went back to my homeland after almost thirty years.

My parents migrated to Australia when I was very young. When my parents retired, my dad took mum (against her will) back to Greece to live. They still had their house, their olive grove and their vineyard in Greece so dad decided to leave Australia and settle back in his beloved village where we were all born. This was very difficult for his children and grandchildren as we missed them greatly. But the fact that they returned to Greece opened the doors for us, his seven children and their families to visit them and in so doing discovering Greece all over again.

I remember landing in Greece for the first time. Tears came down my face. I had an overwhelming sense of coming home and a feeling of belonging to this great land.

My parents were at the airport to greet us and quickly we got the bus to Hora, the nearest town to our village in the Peloponnese outside Kalamata. It took us five hours to get there from Athens but the view along the way was absolutely beautiful. What struck me as odd was that Greece, so rich with history looked as if it was untouched by man. You were in awe of the rugged beauty of the terrain and the magnificence of its landscape.

Finally, we reach Hora and got a taxi to our little village high in the mountains called Flessiada. A place steeped in history and natural beauty. The place of my ancestors, a place we call home.
My son (who was four years old at that time) and I spent six glorious months in that little village, exploring the countryside, its history and the sheer magic of being with your parents/grandparents and living off the land.

When we first arrived, it was spring time. I was blown away by its exquisiteness. I would sit and marvel at the beauty of our little village. The mountains would be filled with wild flowers. Unbelievably stunning!!

There would be irises, red poppies, white poppies, purple and blue flowers everywhere. It was as if you were in paradise here on earth. It felt as if your senses were dormant before this and studently they are awakened. Every sense in your body came alive and every feeling was intensified. It was like looking at a Van Gough painting mesmerised by the brightness of the light and the intensity of the colours. You walked in the fields and you lose yourself in its splendour and you are one with nature!

Our village was previously called Pethemen under Turkish rule but was renamed Flessiada in honour of the freedom fighter Papaflessas. It is in our little village, high on a steep peak, called the Tabouria, where Papaflessas fought and died for Greek independence.

We would often walk to the Tabouria high up in a mountain, halfway between our village and the adjoining village of Maniaki and feel the history within us. At the Tabouria, they have built a church ‘Agia Triada’ and a statue of Papaflessas to commemorate this special historic event. Every year, on 20 May all dignitaries come to pay their respect to the heroes that fought and died for our freedom. We were lucky to be there and witness this event and celebrated at the panigiri held in our ‘platia’. While we were in Greece we had bought the 1972 movie titled ‘Papaflessas’. It was a great movie, arguably one of the best Greece has ever made. My son would watch the movie again and again and we’d walk up to the Tabouria and visualise the battle. He pretended he was Papaflessas fighting. As we sat there high up on the rocks we would look out to the beautiful landscape and imagined the horrific battle scene that had taken place. As a light breeze blew, I felt a shiver and the presence of the spirits all around us. Happy in the knowledge that we, the Greeks, have won our freedom.

On the other side of our village there is a huge cave in a mountain called Koufiero. It was in this cave that over a thousand Greeks were living in hiding from the Turks. When the war of independence started in 1821 the Turks retaliated and burnt villages to the ground and went on a killing spree. Many people escaped in the night and tried to find a place to hide and survive. They discovered this cave and they made their home there. Inside the cave there are two wells. One was to collect water and the other was used as a passage way to connect to other areas of the cave. There is an icon carved on the wall and you can imagine the people having liturgy there. The sad thing is that a priest was caught at the river below and they tortured him to reveal the hiding place. The Turks found the cave and burnt everyone alive. You can still see the scorch marks on the rocks and you shudder at the thought of the agony they endured. There is a church built within the cave and we light a candle for their souls. 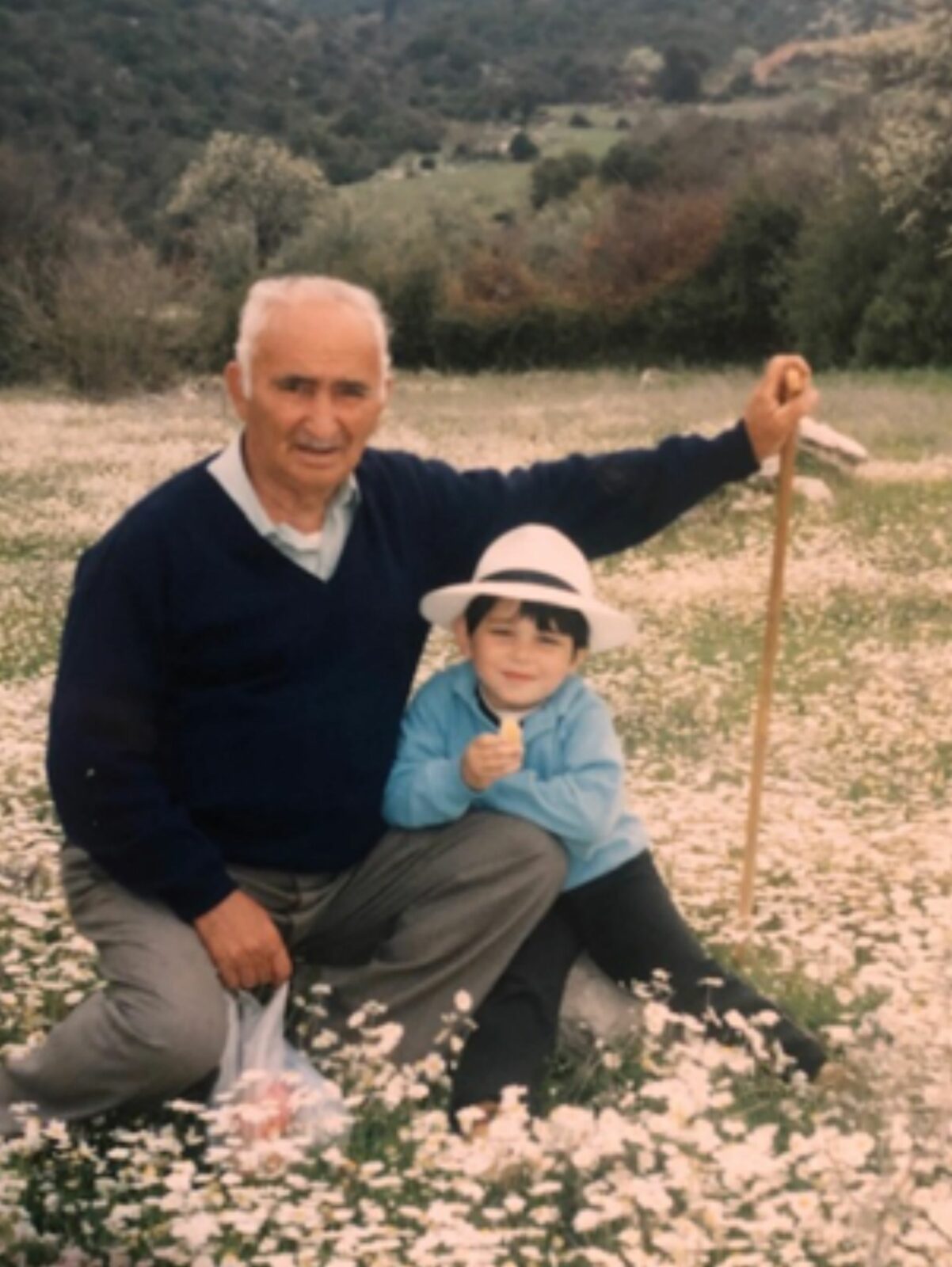 The mountains filled with flowers. 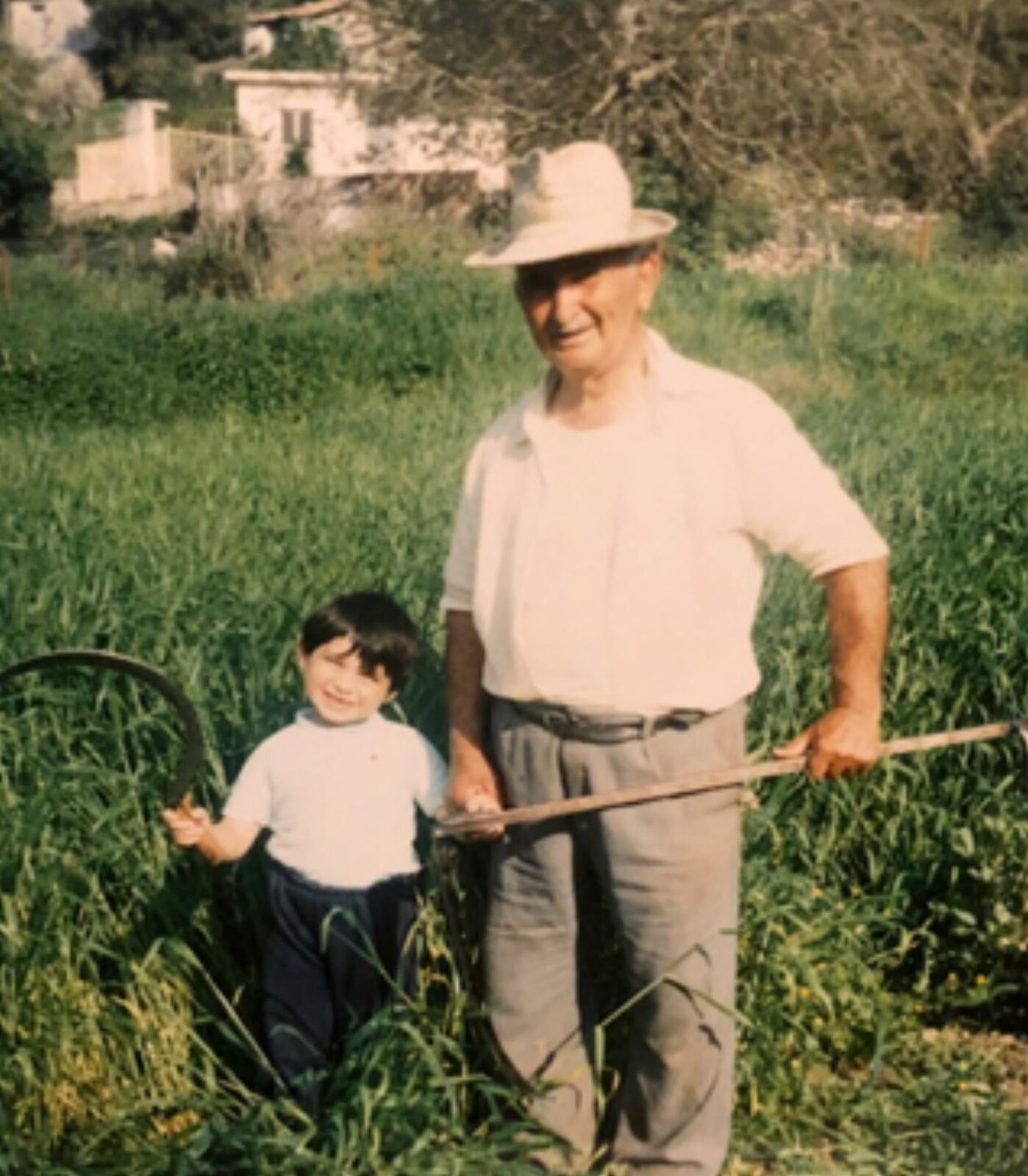 Gardening on the Greek countryside. 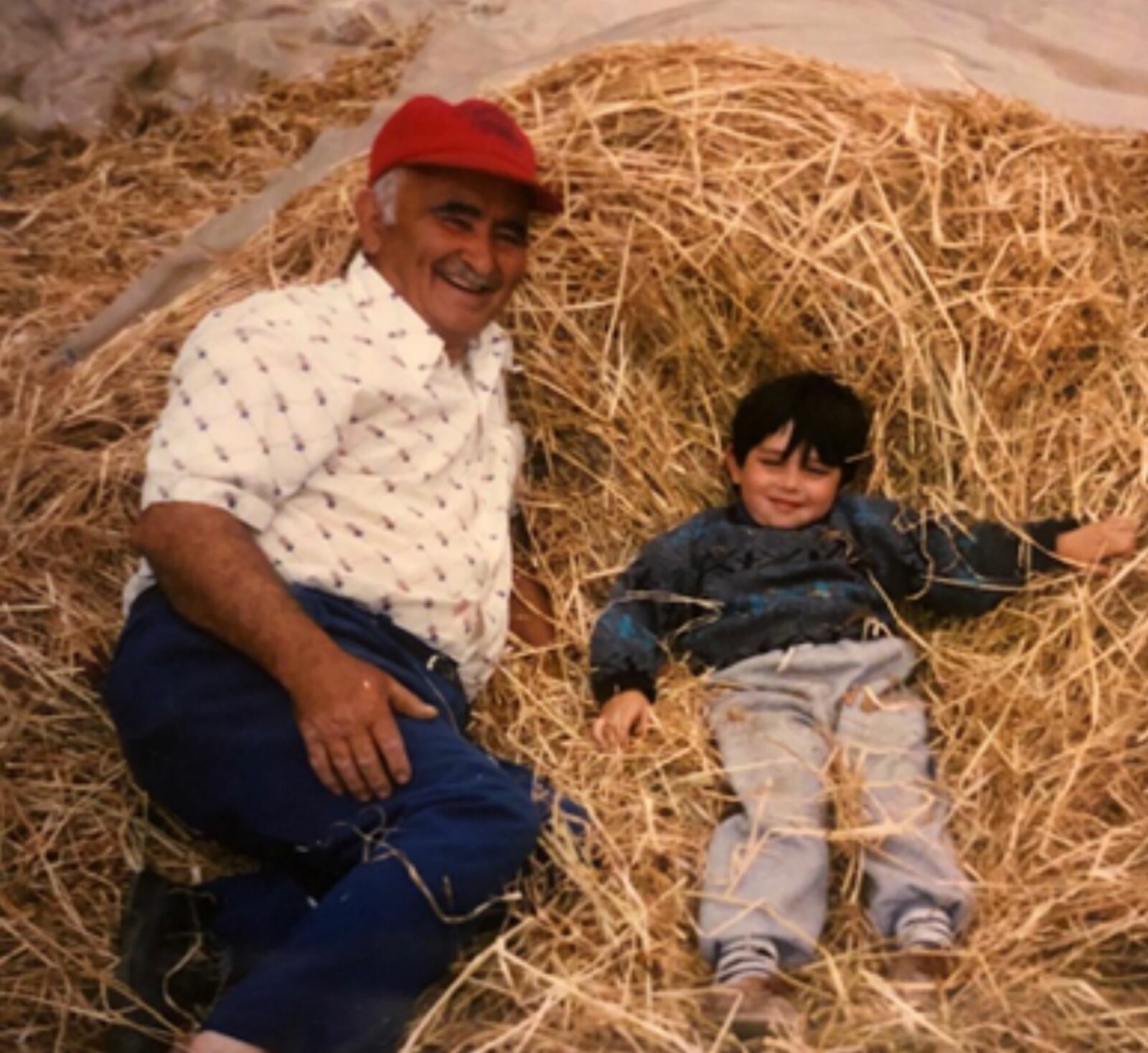 Harvesting the hay to dry for the winter feed. Drying figs to bring to Australia. It is said the people that escaped the burning cave were thrown onto an aloni (threshing floor)-‘Sarat aloni’. The horses, with nails protruding from the horseshoe, went around and round trampling them to death. And the blood ran down making the river red. You cannot overlook such history and we must never forget how lucky we are to be free.

We would go for long walks every day and while I was admiring the beauty of the land my darling mum would pick wild asparagus, ovria, kokopsomata and other wild greens. All delicious vegetables to eat from nature to our table. We also picked wild oregano, mountain tea and even chamomile. We would often walk to the river (kefalovriso) to catch fresh water crabs. Dad would light a fire and we’d have delicious crabs to eat.
Dad had an amazing vegetable garden. Even though there are so many rocks in Greece, the land is fertile and the climate is the best in the world so everything grows and everything tastes delicious. I remember my son picking the corn and dad would light a fire to cook it. Sweet memories of us sitting together around the fire enjoying the delicious meal. Whoever passed through our village and stopped for coffee would leave after having a three-course meal, homemade wine and a car load of freshly picked vegetables to take with them. My parents were so welcoming and opened their heart and home to everyone. Talking about Greek hospitality, this is it! Picking oregano from the mountains in our village. 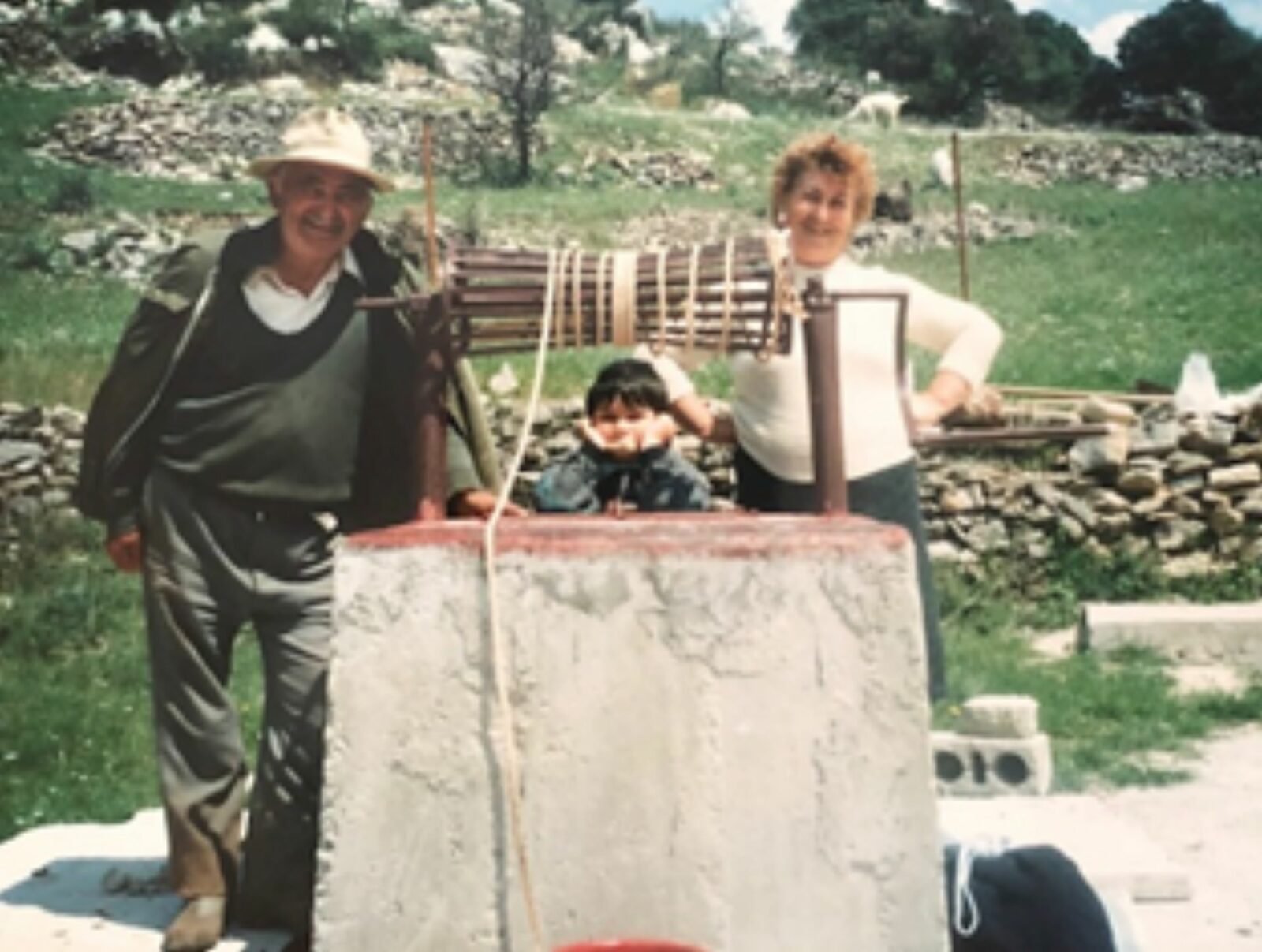 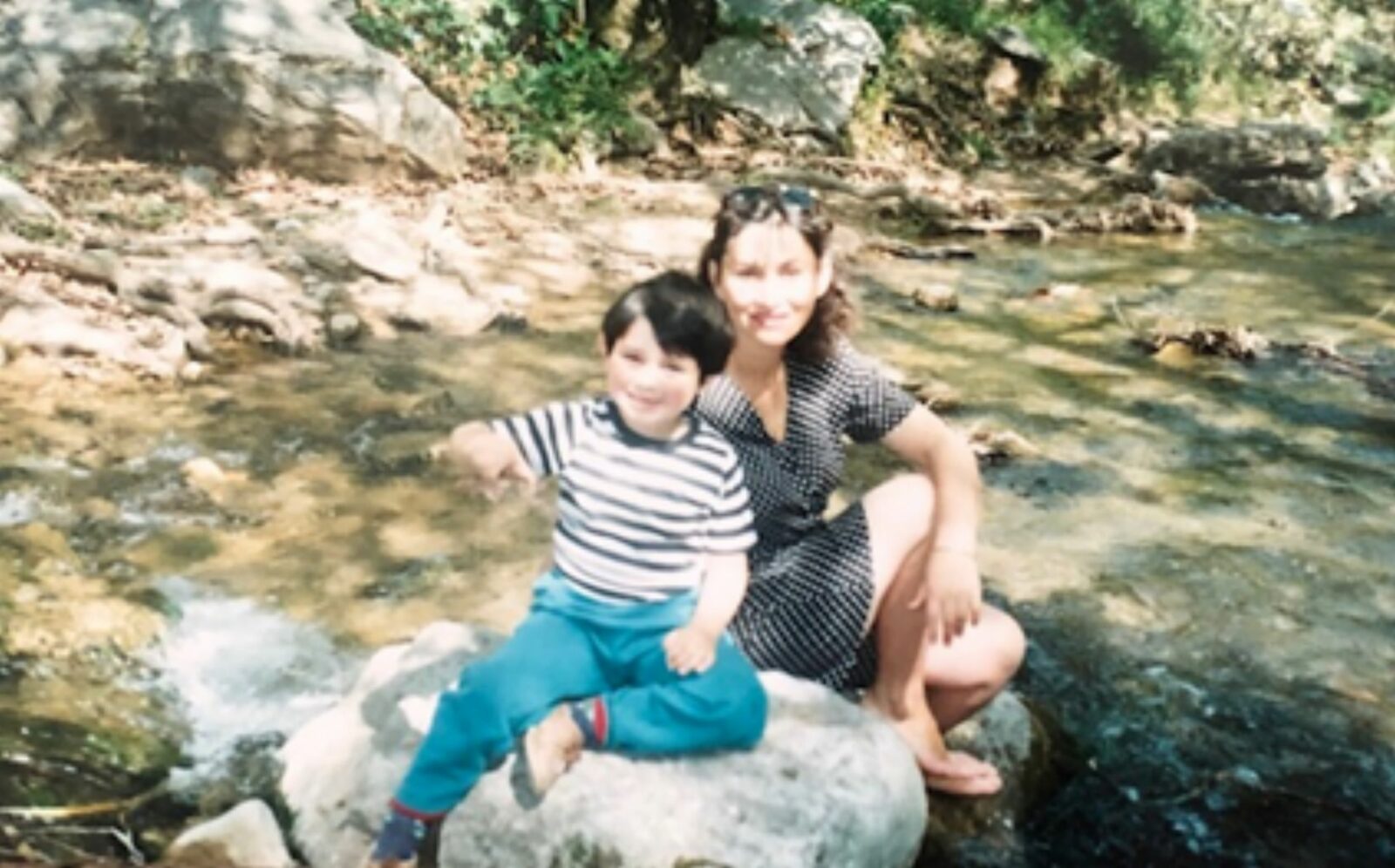 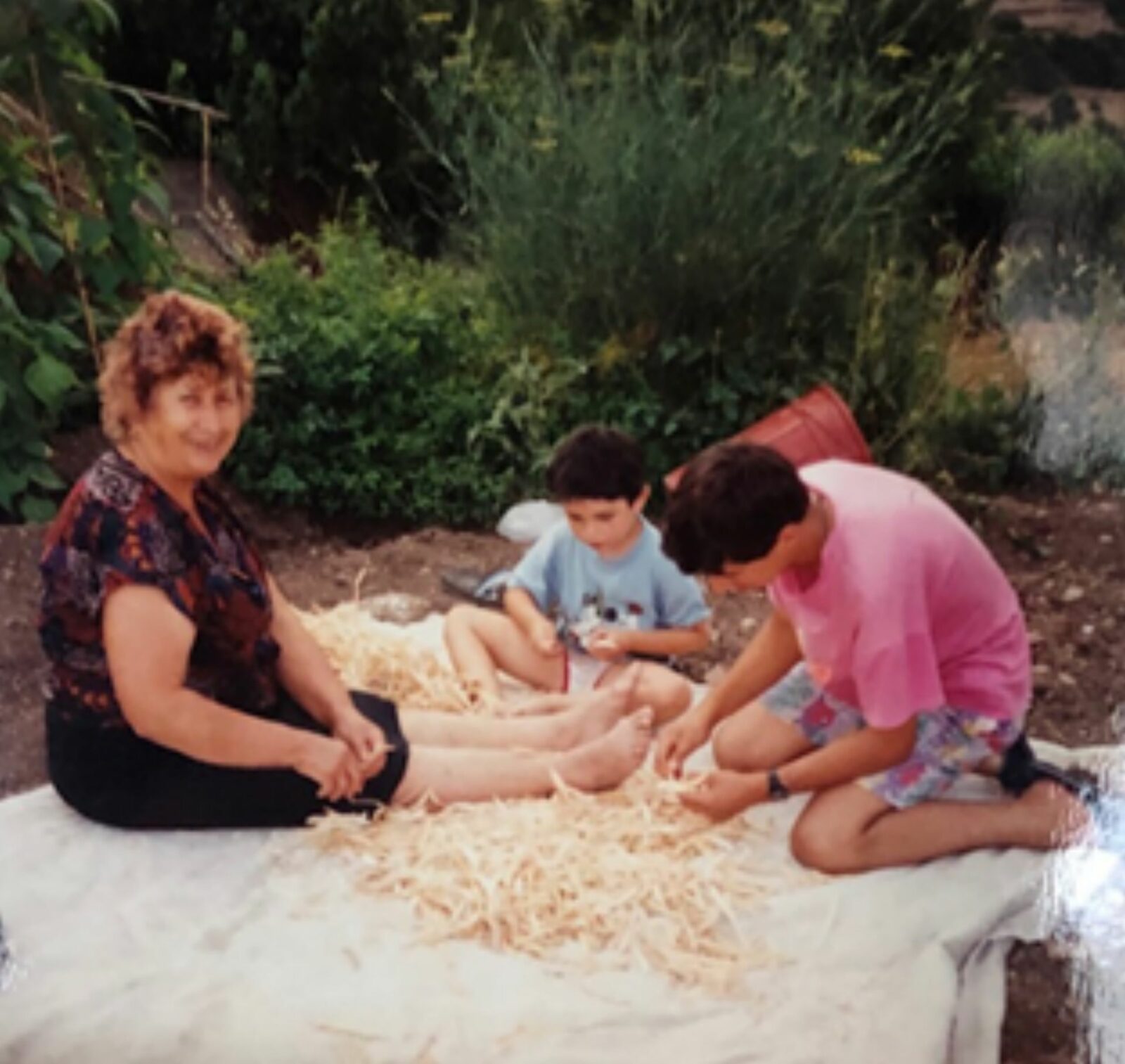 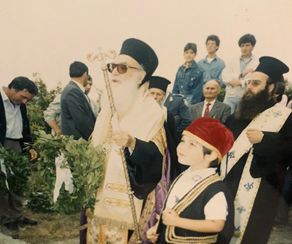 From the memorial service for Greek hero Papaflessas. 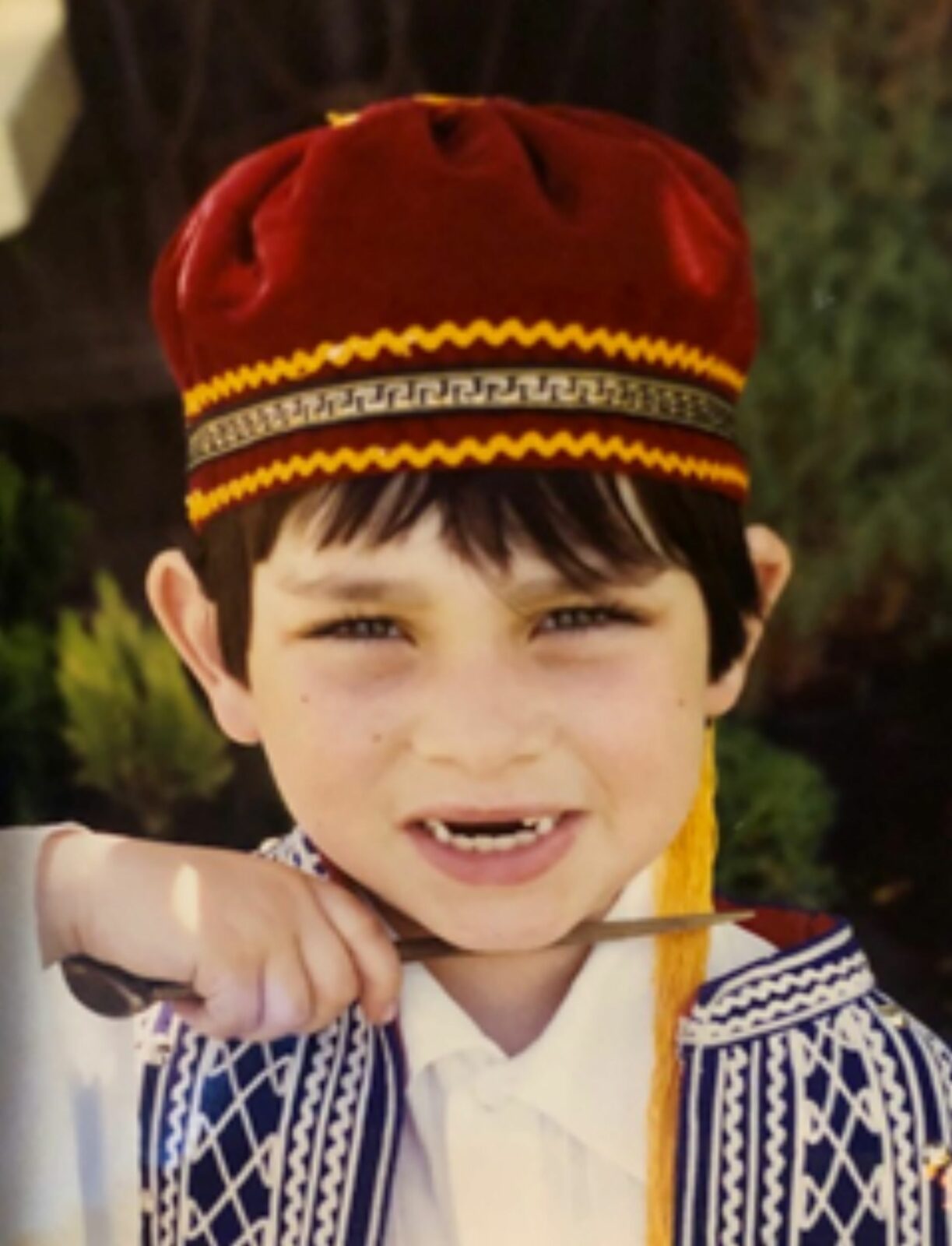 My son, playing the role of Papaflessas. At the Tabouria where Papaflessa fought and died for our independence. This is the tree that Imbraim leaned Papaflessas' body to pay his respects. 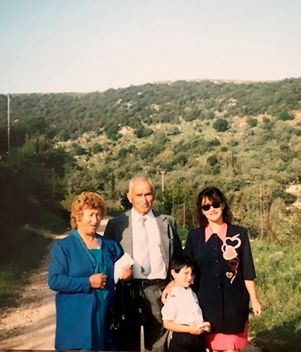 Walking high up the mountain to the Tabouria for the church service and memorial of Papaflessas.

We always brought food with us when we went for walks. Bread, that mum would freshly bake in her woodfire oven, olives that she picked from her olive grove, cured and marinated herself. Homemade feta cheese made with milk from her sheep. Fresh tomatoes and cucumbers picked as we leave. Simply the best!!

During our many hiking trips my son and I would get so excited to find tortoises roaming happily along. We also saw many snakes but luckily at a distance! Mum and dad had fifteen sheep and about ten goats which we loved and got to milk daily. My son had a ball feeding the lambs and playing with the animals. He also got to pat the calves and walk with the cows on neighbouring land. He rode on a donkey and a horse which was very exciting.

I would marvel at the ease in which mum made feta cheese. She milked the sheep, strained then boiled the milk. She scooped out the cream on top and collected it to make butter. To the milk she added the culture and left it for an hour then she added rennet to coagulate the milk. After forty minutes she cut the curds into cubes and slowly stirred. She placed the curds into a clean draining cloth and hung it up to drain. Once it was firm she cut the cheese and salted it and its almost done. Mum made the best feta cheese ever. I can still smell it coming out of the barrel and the taste was simply exquisite. The whey was then used to make ‘mitzithra’ a hard, white cheese used to grate on spaghetti. She also made yoghurt. Nothing was wasted. I grew to respect the village life immensely. The people looked after the land and in return the land gave them everything they needed.

My son Christopher ‘Hristaki’ had a wonderful time working on the land with my mum and dad and these memories are priceless. He helped plant more vines from last years cuttings. He helped harvest the hay, lay out the figs to dry and take out the seeds from dried beans for next year’s planting. He even helped his grandfather pick the grapes and squash the grapes to make wine.

We spent glorious days exploring our little village. We drank water from the ‘vrisi’ at the village centre. The water came from springs in the mountain and was so cold and thirst quenching. We walked along the old road built with rocks many hundreds of years ago. My son walked this road with his grandpa just as my dad walked the same road with his grandfather. We explored old ruins and imagined life as it was. We walked to neighbouring villages and visited beautiful beaches in Yialva, Pylos and Methoni all within an hour’s drive.

Before we knew it, our time was up and we had to leave this beautiful village. Parting was so hard especially leaving mum and dad behind. But this magical trip was the beginning of our love affair with Greece. Just a 24-hour flight away, with mum and dad there, it was always part of our travel destination. At times we would just go for the two-week school holidays. Every year that we travelled to Greece made us love it even more. We needed Greece like we needed air to breathe. It gave us freedom from the structured routine of day to day life and it re- energised us. Greece is enchanting. The rugged beauty, the history, the climate, the beautiful beaches and the relaxed way of life make it truly the best country in the world.