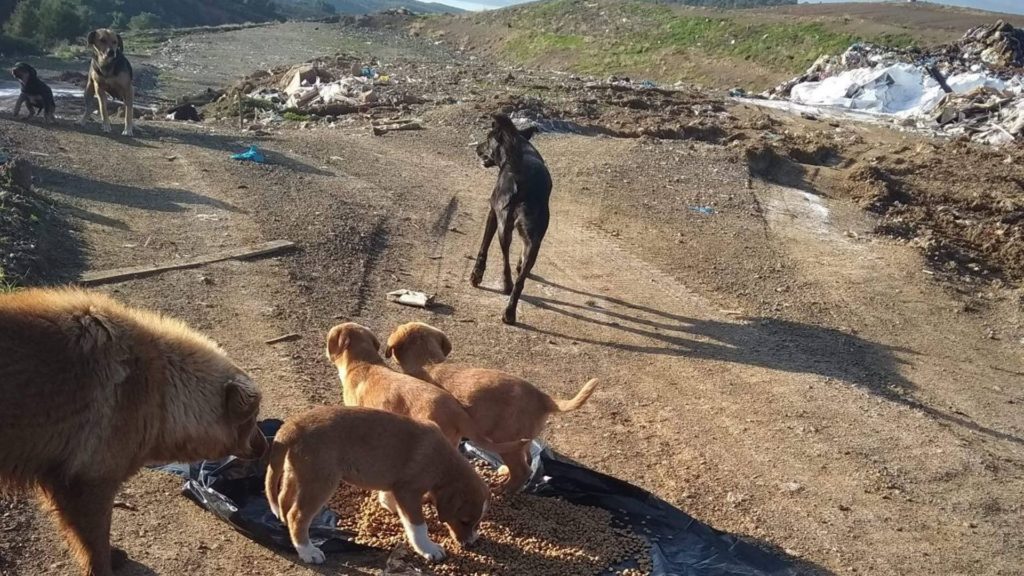 A mother watches her pups feed as other dogs at the Loutraki landfill gather to eat the donated dog pellets. There are 3.5 million strays living on Greek streets. Photo: Loutraki Landfill Dogs

A landfill site at the seaside town of Loutraki, about 80km west of Athens, is the “home” for up to 130 stray dogs and while the authorities seem disinterested in their fate, a lady called Aphrodite Tsoulaka, helped by a few volunteers, is trying to make a difference.

Ms Tsoulaka has been looking after the dogs for a number of years with the help of a handful of volunteers.

She set up a page on Facebook in 2018 to generate help and donations as she barely has the means to support herself.

Meanwhile, Ms Tsoulaka, who is reported to barely have the means to support herself, is looking after a number of stray dogs on a small plot of land she is renting. Once the dogs are captured, they are neutered, treated for many of the illnesses that have arisen from living in the dirty conditions of the landfill and are given a decent home with her.

For the sick dogs that she cannot bring to her home, Ms Tsoulaka and her volunteers try to capture the animals, put them in a crate and treat them. The very sick animals are taken to vets for treatment. Once the animals are better they are be released back to the landfill.

Ms Tsoulakahopes to take the dogs out of the landfill and find them a good home with a family. She says she needs a larger plot of land with adequate shelter to comfortably house the dogs, treat them and give them shelter until they are adopted by caring people in their homes.

For many of the dogs, the landfill became home when their owners abandoned them there along with unwanted household goods. There are an estimated 3.5 million stray animals that wander the streets of Greece.